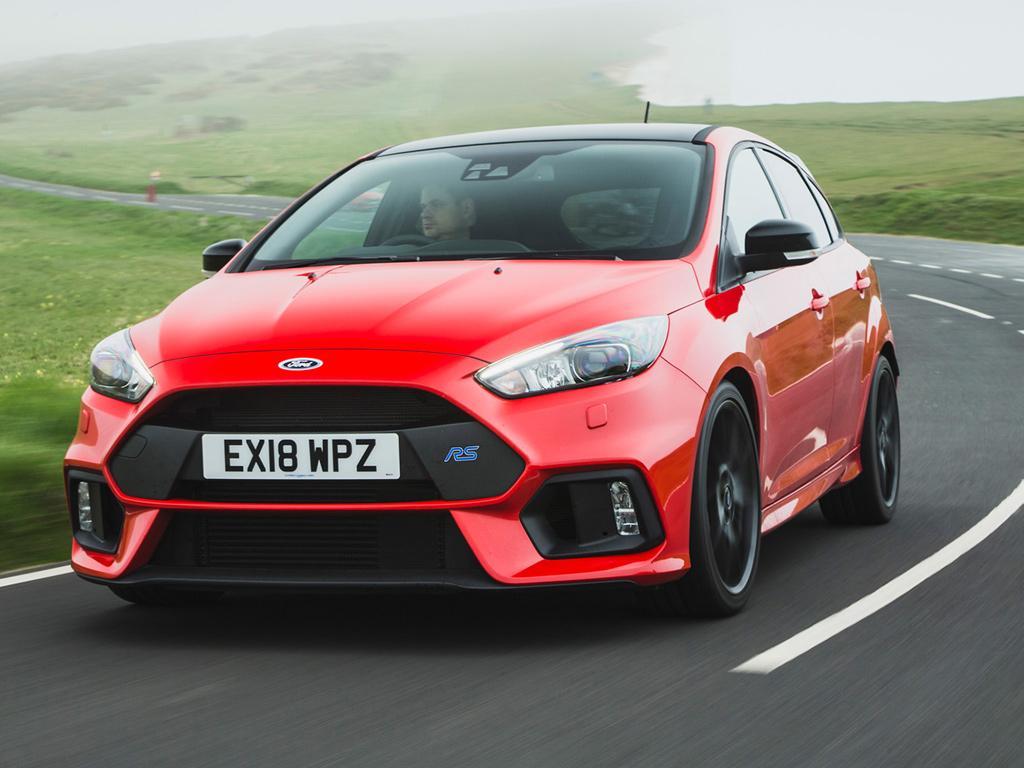 Let's not get too hung up on the colour here. Yes, the RS Red Edition is red - Race Red, as a matter of fact - and, no, you couldn't have an RS in red before, and, yes, there's more than a hint of life-cycle-ending marketing gimmick about the whole idea of paying a premium for it in red now. But think of this less as a 'hello Red Edition', and more a 'goodbye third generation RS', because while there might be a Heritage Edition left to come - exclusively in Tief Orange, no less - the car tested here already sports the optional FPM375 Mountune upgrade that model gets as standard. So, mechanically speaking at least, this is the way the Mk3 Focus RS will be remembered.

That's significant for two reasons. One, the next iteration of the RS - based on the recently revealed fourth generation car - will almost certainly be a mild hybrid, and therefore fundamentally different to the current incumbent. And, two, love it or hate it, the outgoing RS has well-earned an early epitaph. Not since Mitsubishi's introduction of Active Yaw Control in the mid nineties has all-wheel drive been so overtly dedicated to the business of having fun - and even if Ford over egged the salad with the misnomer that is 'Drift' mode, the car reminded us just what could be done if you got all imaginative about how best to deploy peak torque.

Its resulting notoriety has not faded. There are virtually no shrinking violets in the fast Ford back catalouge, and while there are several things wrong with the way the RS looks that have nothing to do with paint (it has too many doors for a start), it has always fitted the bill. Undeniably, the Mk2 was better looking and handily stockier, but no-one is ever going to mistake the Red Edition for a stock Focus, and that's very much the point. Understatedness and sophistication are for Volkswagen; the RS is about making a point in the least bashful way possible.

Inside, its chief foible is apparently insurmountable. Certainly any other manufacturer would, by now, have conceived a way of mounting the front seats so they didn't start halfway up the door cards, but Ford has grimly persisted with modelling the driving position on a Transit. In fairness, after living with the car for a while you notice your proximity to the ceiling less - and the partial leather Recaro seats themselves are very decent. They're standard too, as is much else in the high-spec Red Edition, including the SYNC3 Navigation system, a rear view camera, power-fold mirrors, 19-inch black alloys (to go with the RS Edition black spoiler) and a heated steering wheel.

Otherwise the latest, greatest variant delivers the stock experience: ash-grey plastic, inexpensive switchgear, blue-ish dials and passable build quality. Thankfully the control weights are familiar, too - and a reminder of Ford's talent for tuning such things: nothing that needs pushing, turning or shifting operates without a progressive and oily sort of heft. The RS doesn't attempt to imitate a regular Focus at slow speeds either; there's no Golf R-style modesty here. The rumble of the 2.3-litre Ecoboost motor is never distant, nor is the callousy stiffness of its always-surly trick chassis.

Certainly the RS has never seemed particularly light on its tyres, and the additional power (and torque) afforded by the Mountune kit does nothing much to alter that impression. Ford says the tuner's £899 add-on lowers the 0-62mph time to 4.5 seconds, yet even with it attached the car feels a notch below the current hot hatch big league. Self-assured, linear and industrious the turbocharged four-pot may very well be, but it can't claim to possess the pyrotechnics or ultimate payload of Audi's 2.5-litre inline five or AMG's 2.0-litre engine. Granted, both are installed in substantially pricier cars. But they provide the straight-line yardstick nonetheless.

Truth be told, straight lines were never the RS's strongest suit anyway. Under heavy acceleration it still has a tendency to track with the vagaries of a B road's camber, a habit which, when combined with 376lb ft of overboost, occasionally has you wrestling with the steering wheel for supremacy. Its ride, even in the more gentle 'Normal' mode, is percussive enough to feel fidgety over really difficult surfaces, making the adaptive dampers' second stage of abruptness generally inadvisable for everyday driving. It's not inconceivable that you might even take issue with the length of the gear lever's throw.

Mercifully though, and usually just before you really start to hold its unruliness against it, a corner pops up and the RS lunges at it in the singular, sensational fashion that has been its three-year calling card. Mostly it is about balance, and the car's superlative ability to thrust through a constant radius turn in phases: feeling faithfully nose-biased, then neutral, then, finally, if you insist, hip-sendingly rear-powered - all in the space of about half a second, and all within a particularly obliging ESP bubble. The RS Red Edition (like the non-Red RS Edition) adds a Quaife limited-slip differential into the mix, with the intention of increasing mechanical grip, which it does, which just makes the initial bit faster and neater still.

The Focus is so keen to keep you happy in fact that it is possible to mildly dissapprove of its high jinks; after all, this is a comparatively heavy family hatchback being made to overspeed its outside rear wheel by a very clever all-wheel drive system - the automotive equivalent of having an elephant perch on a bar stool. With the overwrought 'Drift' mode engaged this is understandable, but such objections do tend to occur at a distance, and not while you're merrily driving the door handles off the thing. That's because the latter is very easy to do, and very easy to enjoy - not least because Ford didn't forget to make every stage of the caper feel completely knowable to the driver, which means that nothing happens without a genuine sense of engagement; the quality we prize above all else.

That it comes hand-in-hand with a hooligan-style reputation is merely par for the course. In its brief tenure, the RS has grown no softer or easier to live with; indeed, if anything, it has become more uncompromising, powerful and expensive. The Red Edition in the spec we drove it topped out at £37,385 with options, meaning you could have a top spec Honda Civic Type R and a good year of petrol money instead. You'd have a better all-round mega-fast hot hatch, too. But I'd sorely miss the Focus's tearaway attitude and its bludgeoning inability to hide it. When it's finally gone, I suspect we all will - no matter what colour its paint.