The first GT4 is one of the best road cars ever made. So how about the follow-up? 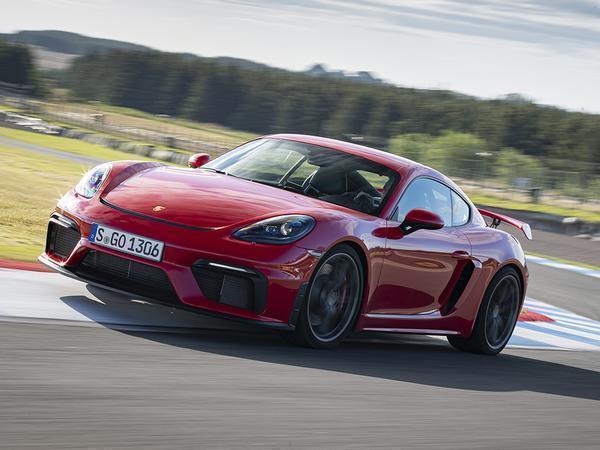 Two things you notice immediately: the weight of the steering and the resistance met by the ball of your left foot when you depress the clutch pedal. Both are appreciably lighter now than they were in the previous model, which makes you wonder. Has the Cayman GT4 gone soft?

This new Porsche 718 Cayman GT4 arrives four years after the original, a car so roundly brilliant it seems unlikely Porsche will be able to improve upon it. Peel away the new car's fractionally sharper bodywork and you'll eventually find the same platform that underpinned the previous model. While there are plenty of detail changes that we'll get onto in a moment, what hasn't changed is the fundamental recipe.

Still there is a six-cylinder horizontally-opposed engine with not a turbocharger in sight, still the transmission is a six-speed manual and while the previous GT4 had a mechanical limited-slip differential with Porsche Torque Vectoring, this new model has exactly that as well. The front suspension is still half-inched from the 911 GT3 (the rear suspension architecture is actually new) and wrapped around 20-inch wheels you'll still find Michelin Cup 2 rubber. So on first impressions, it seems to me that Porsche has not fixed what wasn't broken, then knocked off a couple of rough edges.

We need to plunge into the technical details to find what separates this GT4 from the previous one, beyond the lighter steering and clutch pedal. Porsche says the biggest stride forward was taken with the car's aerodynamics, because downforce has risen by 50 per cent without any increase in drag. The fixed rear wing is more effective now but the biggie is the diffuser, which generates 30 per cent of the downforce that presses down on the rear axle. The exhaust pipes had to be rerouted to clear way for the diffuser, which is fed air by a completely flat underbelly.

There's always a whiff of the old snake oil about downforce claims for road cars. As a rule we should be sceptical. But what is significant here is that there is at least some of the stuff and therefore no lift, which means the car should be stable at high speed. Just let's not pretend it's being squashed hard into the tarmac by that invisible force. Then there is the engine, which is absolutely new and, on paper at least, more of everything. At 4.0-litres it's bigger than the old car's 3.8, and with 420hp it out-punches that smaller motor by 35bhp. Torque is rated at 310lb ft and the redline set to 8000rpm.

The engine is technically derived from the 3.0-litre twin-turbo lump that resides in the swollen bottoms of regulars 911s, minus the turbos, but in reality there is so little carryover of componentry that it is to all intents and purposes a new engine. (A house built upon the foundations of the one you've just razed is hardly a derivative; it's a new house.) Porsche has been able to meet the ever stricter emissions requirements with this new power unit because of the judicious use of gasoline particulate filters, which might yet make it sound a bit flat. We shall see. There's also a stop-start function and cylinder deactivation as well. As an aside, expect to see this new engine used elsewhere in the Porsche model range, although exactly where we don't yet know.

Compared to less racy Caymen the GT4 sits closer to the ground by 30mm on adaptive dampers. Like other GT models the suspension is adjustable, so you can fiddle with ride height and toe and camber settings, while the anti-roll bars are adjustable through three stages if you want to get to work on the car's chassis balance yourself (and risk really screwing it up).

Talking of which, Knockhill in Scotland is a riotous little circuit. It gives you more opportunity to get it all horribly wrong in its 1.3 miles than most circuits do in two or three. It's a cracking track on which to assess a road car, though, because if that road car doesn't have good body control and precise steering and consistent grip and predictable balance, you're going to have a horrible time of it. Not so in the 718 Cayman GT4, because in every one of those regards it is imperious. This is a car that laps the Nurburgring 12 seconds faster than the old one (and its time of 7mins 28secs means it's four seconds quicker than the Carrera GT). Porsche reckons the extra power and torque account for three of those 12 seconds, the rest being down to the improved aero and the tweaked chassis. Plus the latest Cup 2 tyres.

Frustratingly, this launch event only gave us time at the wheel of the GT4 on circuit, so I can't say for certain what it's like to drive on the road. But I can say with confidence that it is blindingly good on track. In fact, confidence is the right word for it, because with such a sweet and benign natural balance, accurate steering and transparent grip, you feel right on top of the car from the first lap onwards. It has that wonderful way of the well set-up mid-engined sports car of feeling minutely adjustable mid-corner, but you never worry it's going to turn nasty and bite back. It's absolutely on your side.

The harder you drive the more faithful the car seems to become, to the point where you fling it at sausage kerbs and commit to blind corners as though you've been driving it all your adult life. Over crests and when landing into compressions the firmer of the two damper modes is more effective, keeping the body better tied down in the first instance and forcing it to regain its composure more quickly in the latter. There is a margin of safety understeer, which lets you know when you're nudging up against the limit. The limit doesn't arrive suddenly. If you were so inclined you could almost certainly dial that out by fiddling with the bars.

There's a really sweet rotation about this car on the way into bend, pivoting about its centre point with hardly any inertia. The steering is basically good with a really natural rate of response, but the rim doesn't wriggle and writhe in your fingertips. It's actually pretty lifeless. The brakes, meanwhile, are good, with a solid pedal that helps you lean on them hard. The car I tested didn't have the optional carbon ceramic brakes but after two quick back-to-back stints of eight laps apiece, I could see no need.

What of the engine? Broadly speaking it runs and feels a lot like the 3.8 in the previous model. It too is a responsive and rev-hungry thing, with a rewarding climax at 8000rpm as you brush up against the limiter. And it feels strong. With the sports exhaust in its more vocal setting the soundtrack is rich and tuneful, but with none of the savagery you get from a 911 GT3 motor, both in terms of soundtrack and power delivery. Which is fair enough. All told it's a lovely unit, though, and a real treat to drive a newly-developed engine that doesn't resort to turbocharging.

The gearshift is as sweet as they come and the auto-blip function, switchable at the press of a button, works brilliantly. One of the few areas in which the previous GT4 could be criticised was its overly long gearing. Nothing's changed. Second will pull well beyond 80mph, third to 120 or so. It means at Knockhill you're in third for almost the entire lap.

I thought I was doing a good job of pushing along in the 718 Cayman GT4, but then I sat alongside Walter Rohrl for a handful of laps and realised I wasn't. His speed and commitment while always being utterly in control will never cease to amaze me. And he still fiddled with his wristwatch every time we crossed the start-finish line, still enthusiastic enough about all this nonsense to time himself lap by lap. (For the record, Herr Rohrl prefers the dampers in the softer setting on track and he absolutely does not use the auto-blip function.)

But that's what I adore about this new GT4. Even when you're not particularly close to the limit of what it'll do it feels exciting and rewarding. You don't need the skill of a double World Rally champion to bring it to life. It feels to me like a friendlier, less spiky sort of car at the limit - not that the previous version was especially fighty - with a more easy-going nature when you're not hunting rumble strips. We'll confirm that once we've driven it on the road, but for now it seems as though Porsche has made the Cayman GT4 less demanding, but no less thrilling.