Enough with the styling already; here's how it drives 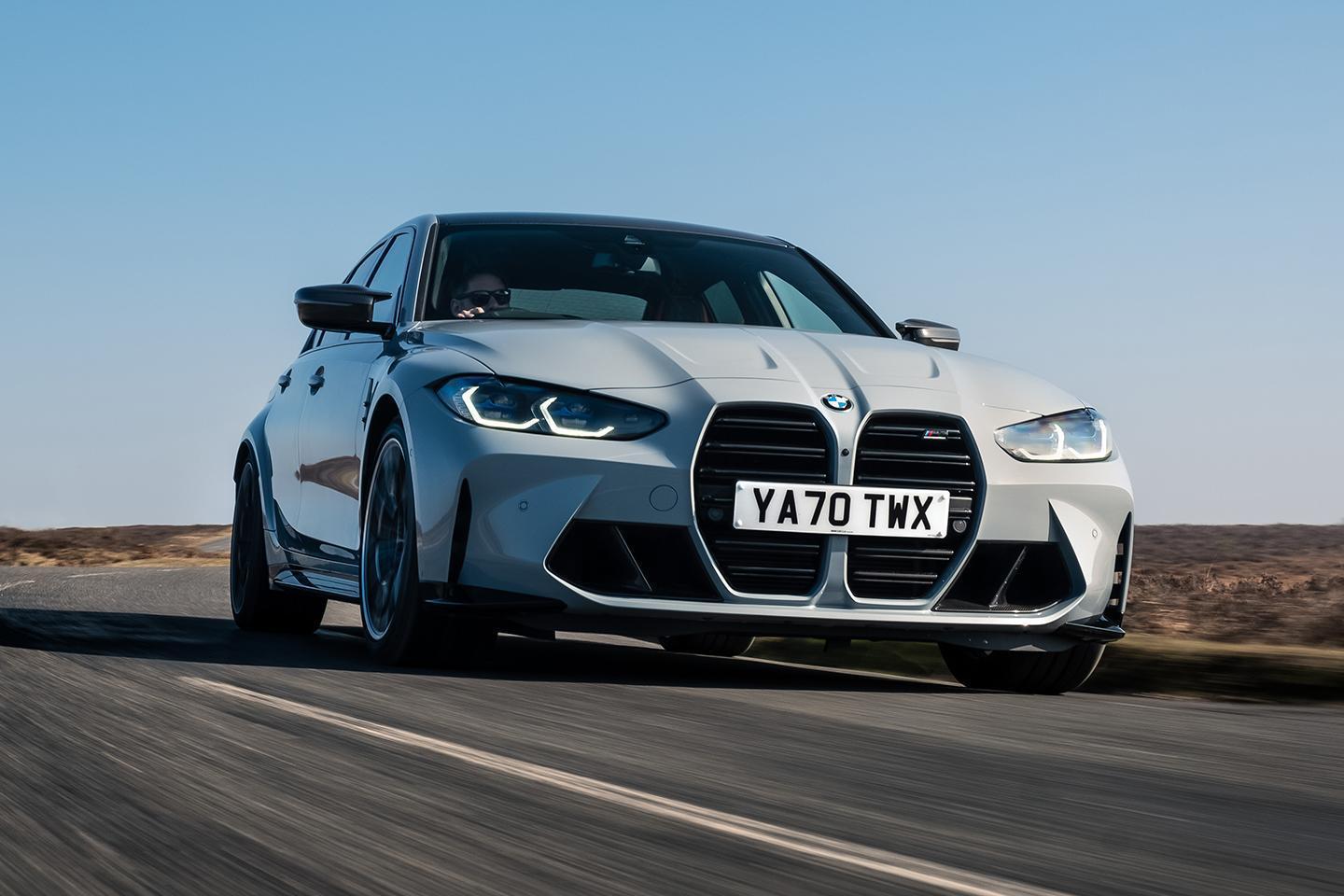 With so much heritage in the name - some might even call it baggage - it is possible to lose sight of what's important in a new BMW M3. Because it represents so many different things to so many different people, quite a few stand to be unimpressed straight off the bat when a new one comes along. When E30s were being stripped and caged for circuit work, so the (now adored) E46 probably seemed too heavy and complex. In 2021 we have cheap V8s being prepped for track, cars once derided as too lardy to be M3s. Funny how the world changes.

With every new M3, BMW needs to prioritise what supersaloon buyers want at that very moment; in 2021, that's those willing to part with £80k or a decent chunk of their salary a month, not those who might want to pick one up for £15k in the adjacent decade. To that end there's no manual gearbox or non-Competition M3 in the UK, because such a pitiful amount were sold previously. It's also why there will be a four-wheel-drive M3 and, more gladly, why a Touring is on the way as well. This M3 embodies feedback and development from the old car, in much the same way that, for example, the F80 went on a diet to be judged slimmer than its chunky predecessor. Given the kerbweight of this one, those priorities seem to have changed. Perhaps old M3 buyers thought their cars were too subtle and hard to distinguish from a regular 3 Series as well - no danger of that this time around, at least.

But let's park the styling discussion before it's left the garage; you know your own mind and a paragraph here isn't going to change it. All we'll say is that the initial pictures really haven't done the car justice. It possesses a lot more drama in real life. But the PH staff weren't in unanimous agreement about the grille - so we don't imagine you will be either.

The interior is mostly standard fare for a modern fast BMW, albeit with the most outrageous pair of carbon bucket seats in the test car. They're part of a £6,750 M Carbon Pack and are stunning both to sit in and behold, like the throne of a haute couture Transformer. Truth be told if somebody told you the M3's cabin was an M5's, there'd be little reason to doubt the claim, such is the space up front, sense of occasion, richness of materials and plethora of tech. In the BMW fashion, there are lots of buttons, but they do mostly make sense and they're infinitely preferable to not enough buttons. Given the Mercedes-AMG C63's interior now feels a bit old and fiddly and the Alfa Giulia QF's has always been fairly low rent, it could be a key advantage - remember, not all the buyers care about the M Drift Analyser and the rear axle subframe being rigidly bolted to the body.

The S58 3.0-litre straight-six booms into life but settles to an inoffensive, almost diesel-like idle. The automatic gearbox is similarly unobtrusive and the M3 gets away without any fuss. Which might disappoint some, but it doesn't take long for some drama to emerge; enormous 275-section front (!) Michelin Pilot Sport 4S tyres deliver incredible purchase on the road, meaning that even through a typically girthy BMW steering wheel there's a bit more of an idea about what they're doing than before. Which is grip, grip and then grip some more, of course, because those tyres are so wide it's a wonder they don't meet in the middle. This at least frees the driver to think about the other axle, where the rubber is only 10mm wider. Encouragingly, even a few early throttle applications reveal a car transformed - not only in terms of outright traction, which is way up, but in the way the M3 behaves as limit comes and goes, which is a whole lot more contained and predictable (and therefore enjoyable) as torque overspeeds rubber. If there is a TC intervention, it does so in a less heavy handed way than before; it's now an engine control system rather than being a separate unit, so responds faster.

On the motorway, the M3 is supreme, cruising extremely maturely and with 35mpg possible. You wouldn't bat an eyelid at having to drive it to Spain tomorrow. Even the tyre noise is acceptable. But then a diesel 3 Series is imperious under those conditions; does the full-blooded M car cut it away from a motorway slog?

Yes and no, is the simple answer. The first thing to know is that the new Competition rides very firmly, regardless of its three suspension modes. It ensures excellent body control for something so heavy, and becomes impressive at speed, but it could prove irritating in urban environments. Those that can deal with an M2 CS or a C63 will be fine here, but Giulia drivers will be surprised by the ride's unending tension. Sport in the M3 is liveable; Sport Plus is not. You'll be in Comfort 98 per cent of the time, if not more. And that's probably the easiest configuration decisions a driver will make, the M3 now so tweakable to a driver's every whim that it's bemusing. New additions for this G80 include the Integrated Brake System from the M8 with a Comfort and a Sport setting, the M Mode (which is actually related to assisted driving, displays and active safety) as well as the M traction control with 10 settings once the DSC is deactivated. On top of the usual powertrain, steering and suspension parameters. And gearbox speed.

Honestly it now feels like overkill, especially as the same thing happens in this M3 as it does elsewhere - steering in comfort, suspension in comfort, powertrain out of its dulled efficient setting - and never think much more of it. The brake pedal seemed better (if still not brilliant) in Sport, Comfort perhaps a little too spongey for a car so immediate elsewhere. And let's not be too harsh on BMW, either, because the customisation overload is prevalent elsewhere, too - AMG introduced a mere nine-stage traction control system at the most recent C63 facelift...

More importantly, though, once configured to your taste the M3 is truly brilliant to drive. The short summary for the rear-wheel drive one is a car that seemingly combines M5 maturity with M2 impishness - and the regard in which those cars are held should give an idea of just how good the M3 is. There's traction and grip and composure on another planet compared to the old car which, combined with the extra power and tightly packed ratios up to fourth, make it feel considerably faster and more thrilling. Moreover, with an additional faith in what the car will do you're encouraged to push sooner and harder, feeling the M differential work its magic and the car gently smear itself wide under power in a transparent fashion of the best M cars and alien to the wayward early F80s.

It's precise without being prescriptive, and unashamedly rear-wheel drive without being intimidating. A more capable M3 has become a more involving one, too, because the driver is more willing to delve into those abilities, without so much concern for road surface or temperature. Our test day seldom rose above seven degrees ambient, yet the M3's assuredness meant it could still be driven quickly and confidently. There's an irony, in fact, at the first xDrive M3 arriving just as the RWD car has reached such an accomplished level - there seems precious little need for it in the UK. It will feel immensely secure for those who prefer it and engaging for those that want it. Anyone craving interaction beyond what the MDM mode permits will be requiring a track, possibly an empty one.

Obviously the 510hp engine and eight-speed automatic gearbox aren't bespoke to this car, having also seen service in the X3 M and Alpina B3. Furthermore, while there's a bit more vigour to the upper reaches than in the Alpina, this M3 striving for 7,200rpm with additional purpose, it isn't an indisputably wonderful straight-six. In the context of the class, both Alfa Romeo and AMG deliver more on an emotional level, even though they're all identically matched on power.

The gearbox, honestly, is a tricky one; for the overall change in remit it suits the M3 pretty well, shifting swiftly and intelligently. However, some drama has been lost with the departure of the DCT, particularly the way it would snap through ratios like a sequential. That ability to sneak in a last-second downshift or go up right at the limiter has gone, which might upset the M aficionados. Equally it's not hard to imagine plenty more people being happy with the auto's easygoing nature. In a very, very strong package, the powertrain is probably the car's weakest link - which is very rarely the case with a new M3.

There's no avoiding the size and weight, either. For something 4.8 metres long, 1.9 metres wide and 1,800kg with a driver in, the M3 is formidably capable, and dextrous in a way that is a real credit to its maker. But there are moments, a bit of float here or running across a white line there, where you're reminded the G80 is somewhat of a chunky monkey. Again, it's more likely to upset those who know their S65 from their S54 than the conquest buyers BMW is interested in, but it seems a shame that it's had to bulk up quite so much. A DCT F80 M3 was 170kg lighter and more than 100mm shorter than this car, if not much narrower - and nobody complained about that feeling cramped or insubstantial. And given the enormous advances made here in how the car drives, you can't help but wonder just how good a G80 M3 with a few less kilos might be.

Of course it is conceivable now that BMW considers that base covered by a future M2; its presence in the range justifying the M3's heavyweight, high-bandwidth status. Considered as a mini M5, the M3 is an unreserved triumph - to the extent that it makes you question the need for the larger car. It's immensely fast, brilliant to drive, a joy to travel in (often two separate things) and brimmed with the sort of intangible swagger that only good M cars seem to possess. True, £84k as tested looks mad for an M3, but for the experience offered in return it feels a price worth paying. It's a superb sports saloon for 2021, even allowing for reservations around weight and powertrain. On first experience it appears to tread a nice ground between the thuggish attitude of a C63 and a Giulia's eager athleticism, as well - which is exactly where an M3 should be. Perhaps it's not quite the car we expected, but the rear-drive G80 absolutely delivers.