The fastest, angriest roadgoing Huracan is an absolute blast on track 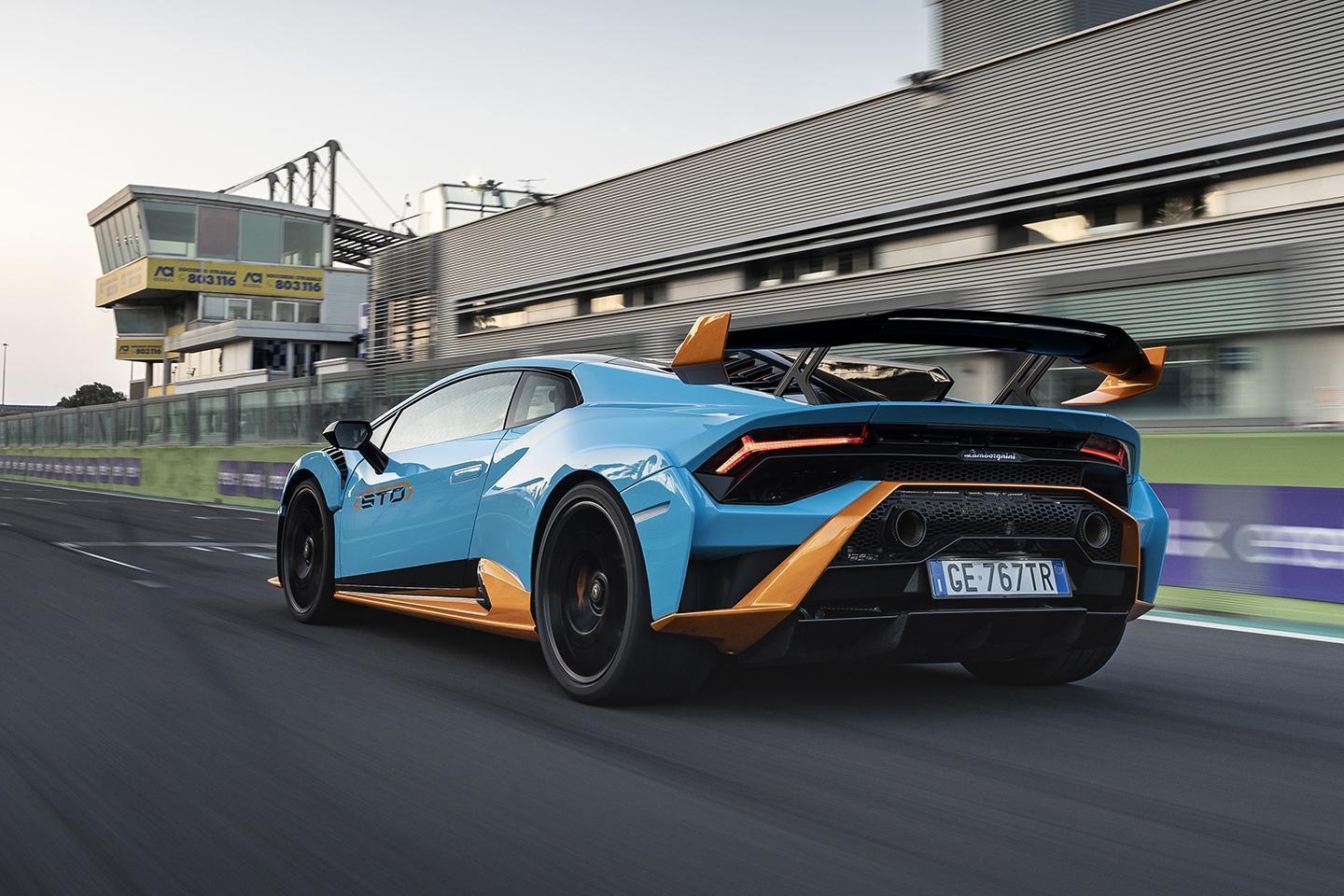 Lamborghini was late to motorsport, Ferruccio himself not really seeing the point when compared with the street-stopping theatre offered by the brand's early cars. The company did eventually start racing, and is now regularly at the sharp end of GT3, but it has been similarly slow at following Porsche, Ferrari and McLaren into the niche of the track-biased special - cars like the various RS 911s, LT McLarens and Ferrari's Pista and Speciale variants. The Huracan STO is late to the party, but that doesn't make it an unwelcome guest.

STO stands for Super Trofeo Omologata - as in homologated - with the new car reckoned to be a road-going sister to the existing Huracan Super Trofeo single make racer. Like the competition version, the STO has been stripped to its lightest weight, and uses rear-wheel drive rather than the weightier all-wheel-drive system of other quick Huracans. Lambo CTO Maurizio Reggiani reckons it's substantially quicker around almost any track than the not-exactly-tardy AWD Huracan Performante. You remember: the one that set a Nurburgring Nordschliefe record back in 2017.

The STO does this without any extra power. The Performante's 5.2-litre V10 had already been turned up to something over 10, and the STO makes the same 640hp maximum (and revs out to an equally altitudinous 8,500rpm). The new car's peak torque has actually fallen from 443lb ft to 416lb ft. The engine has been retuned to improve low-down responses and has been given a bespoke exhaust system.

More work has been done on the other side of the power-to-weight ratio. The STO's bodywork is mostly carbon fibre, with the list of panels including the single piece 'cofango' front-hinged clamshell. The cabin has lost carpets for rubberized matting and door cards for carbon panels, along with most NVH insulation. Even the windscreen is thinner. The result is a dry weight of just 1,339kg, 43kg less than the same figure for the Performante. And while much of that saving has come from the deletion of all-wheel drive, the STO has also gained active rear steering that has brought additional mass.

The two other noticeable changes are those that have the biggest effect on the STO's relationship with air and ground. The regular Huracan's active aerodynamics have been replaced by a huge fixed rear wing with three adjustable positions, this working with the front splitter and underbody elements to make up to 420kg at 174mph (with its lesser settings producing 363kg and 324kg at the same speed). It sits on new bespoke Bridgestone Potenza tyres, with these available in both Cup and ultra-aggressive Race form, the latter being close to road-legal cut slicks. There are also motorsport grade CCM-R Brembo carbon-ceramic brakes, similar to those fitted to the McLaren Senna.

Driving takes place on the 2.5-mile Vallelunga circuit near Rome, the same place I got to experience the SC V12 Essenza last month, and in conditions that were even hotter: air temperature was over 40 Celcius and the track beyond 60 Celcius by the end of my time with the car. The STO was unsurprisingly slower than the seven-figure track-only hypercar. Yet it was also more fun, and more easily taken both to and through its limits.

Subtlety isn't on the list of features. Without the disguise of the prototype version I drove last year at Nárdo the finished STO is showy even by the Huracan's high standards, with contrast colour bodywork and (optional) STO graphics on the doors. Details like the 911 RS-style carbon vents set into the tops of the wings, and the 'periscopio' air vent on the engine cover, look spectacular up close.

There's less fuss in the cabin, with an Alcantara dash top and the leather bucket seats representing the limit of the plushness. The cars at Vallelunga had four-point harnesses and doors were opened with fabric pulls. But the STO keeps the Huracan's standard central touchscreen - this giving access to lots of snazzy new telemetry functions - and still has climate control and air-con, one of the sacrifices often made by supercar makers chasing minimum weight numbers.

The first difference over the prototype is obvious when trundling down the pitlane: a turned-down low-speed soundtrack. The car at Nardo was loud everywhere, but the production car is much quieter at a gentle pace - this to meet drive-by noise standards. This restraint doesn't last for long, with the Trofeo dynamic mode selected, acoustic flaps in the exhaust open at 4,500rpm and the full V10 soundtrack from that point onwards is utterly savage, even when experienced through a helmet.

While straight-line performance is predictably huge, the STO is actually fractionally slower on acceleration benchmarks than the Performante. It feels keener though, thanks to sharper throttle mapping that gives hair trigger reactions to the top of the pedal travel; apparently even the sharpest road car set-ups tend to have a small software-added softening to improve drivability. The STO rips through its seven transmission ratios at a rate that makes it hard to keep up when using the paddles, and certainly when trusting to the slightly leisurely change-up lights. There is well under a second between the final one illuminating and the engine banging into its limiter.

Straights are fun, but corners are better. The STO's steering is deadly accurate, and although there is little low-level feedback behind the slightly numb assistance, strong caster effect from the front suspension helps keep it aligned with where the front wheels are pointing, even when the car is sliding.

Although the adhesion generated by a fresh set of the Potenza Race tyres was huge, grip levels are finely balanced at each end and the balance is impressively exploitable for something so potent. Turn-in is phenomenal, but although the combination of a torque biasing rear differential and active rear steering fight understeer, the STO will ultimately run slightly wide in slower turns with optimistically early throttle applications. Yet the engine's linear responses and lack of low-down torque when compared to the turbocharged competition also made the STO feel impressively unsnappy under power, the rear axle easily taken to the edge of breakaway in longer corners.

Beyond this, the Trofeo mode allows a fair amount of oversteer even with the stability control still nominally active. But the Race compound tyres are happier delivering grip rather than slip, breaching their limits egregiously creating the sensation of lost time and turning the data screen's Delta time accusingly red. Used respectfully the Bridgestones are capable of huge adhesion, the telemetry regularly reporting sustained lateral loadings of more than 1.2G.

The aerodynamic assistance is experienced through trust rather than sensation; the steering doesn't gain noticeable weight as the forces rise - the car I drove having its wing in the most aggressive position - nor does the ride get harsher. Vallelunga's hugely fast Curva Grande is a proper heart-in-mouth corner, which I remember feeling very adventurous at speed when the McLaren 720S was launched at the track back in 2017. The STO takes it in fifth gear without any untoward drama, thanks in large part to the Hand of God.

Brakes are similarly no-nonsense. The pedal has a small amount of movement at the top of its travel, but beyond this the CCM-R brakes are massively powerful and seemingly tireless, even under huge repeated loadings. Even taking the STO into ABS intervention at the end of Vallelunga's bigger straights would rarely turn the brake temperature display from green to yellow, and then only for a second or so. This is a car that is clearly designed for regular, hard circuit use.

But will it get it? Many buyers will be attracted to the STO's on-paper performance (and range-topping pricetag) rather than its ability to cut it at the sharp end of a high-end track day. Lamborghini CEO Stefan Winkelmann reckons that about a third of buyers are planning regular circuit use; the other two thirds are set to miss out on what the STO does best.

The company's decision not to turn the STO into a limited production run has been entirely justified by early interest, with the waiting list already extending to July next year - that figure representing more than 1,500 cars. On the basis of that reception, Lamborghini's first track-day special almost certainly won't be its last.