Take one 700hp Porsche and one 720hp Ferrari, add one wet Wales and stand well back... 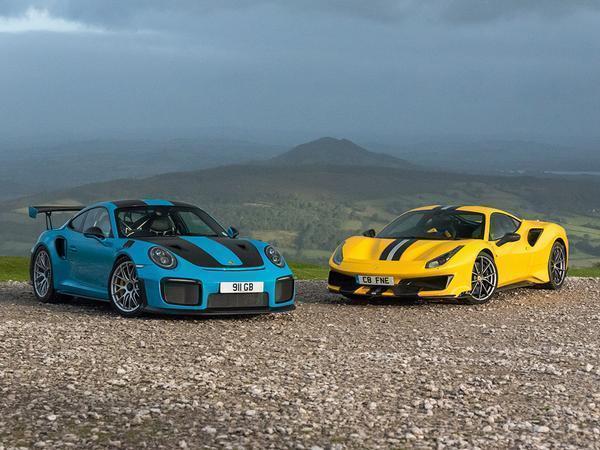 Though it's been said before, it's worth repeating: we live in a purple patch for supercars. Oh sure, there are grievances about availability, cars being flipped for profit, the demise of the manual gearbox and the inexorable rise of the turbo, but never before have there been so many cars offering such prodigious talent - and yet such relative approachability.

Those sufficiently monied could drive a McLaren Senna to any old track day, listen to podcasts and pick up a coffee, then blitz racing cars on the circuit. The Aventador SV J has one of the world's greatest V12s, with 100hp more than a Lambo flagship of just a decade ago, yet is a pussycat compared to any Diablo. Bugatti makes a car that'll do 300mph; Koenigsegg says it has a car that will accelerate even faster. For those with the cash, they've never had it so good.

Furthermore, anyone taking issue with any perceived lack of involvement, engagement or excitement should try a 488 Pista or GT2 RS, on the M4, at night. In rain that would call off a Rugby World Cup game. The modern supercar feels plenty senior enough then, thanks very much, the Porsche's front end worryingly light at points, truck grooves playing havoc with the aggressive camber of both, the Ferrari spinning its wheels in fifth gear...

Why GT2 RS against Pista? Because we could, largely, and because there's nothing better to properly contextualise a great car than a great rival. They're also both the first of their kind to breach 700hp, which remains a bonkers number even in 2019, they've both confounded expectations for this type of car and they've both proven utterly exhilarating in isolation - why wouldn't you drive them together? As such, there won't be a winner; the GT2 RS and Pista are both five-star cato a previously unknown level. There will be a conclusion, a personal preference, but be in no doubt: both the Porsche and Ferrari are phenomenally, exceptionally good. Finally, and perhaps most relevantly for this discussion, the classifieds show that you won't get in a GT2 RS for less than £300k, or a Pista for £350k; buyers could likely have both of these, not either.

Judgement day (and a bit) begins in the Pista, because the Porsche has to be collected later on. There have been suggestions that the 488 Italian-for-Track isn't far enough removed from a GTB to warrant the premium but, harnessed into a car shorn of both radio and carpet, it feels more than focussed enough. The lack of any entertainment proffers chance to concentrate on other elements, too; how dated the 488 interior looked by the end of its life, how much noise emanates from apparently everywhere, how the seating position isn't quite as perfect as you remembered.

Even at moderate speeds and commitment levels, however, the Pista's genius is blatant to the point of being indisputable. Another 50hp on top of 670hp doesn't sound like much, but don't forget how it's achieved: the crank is lighter, the rods are now titanium, the turbos are from the Challenge car - this is not just an ECU and boost job. Therefore even beyond a GTB engine that won back-to-back International Engine of the Year titles, the Pista's 3.9 V8 is insatiably urgent, responding to every blip of the throttle like a naturally aspirated car - perhaps better - and yet backing it up with titanic turbocharged torque. Its automatic is better calibrated than many a luxury saloon and the low speed ride - a key supercar metric, surely - is sumptuous.

With Porsche picked up, M4 and the borders just about navigated - both cars have very good wipers, it turns out, as well as excellent headlights - and a night's rest, the next day dawns a little less apocalyptically wet. It's raining vertically now, rather than horizontally - thank goodness.

Even in these conditions though, the Pista is just sublime; arguably its performance in grizzly conditions is all the more impressive than its dry weather form, because of how much can be exploited and enjoyed when everything suggests it shouldn't be possible. The fabled Bumpy Road mode delivers both peerless comfort and unerring, delicate control, the car gliding across the surface in a way the Porsche can't, yet keeping you perfectly in touch with the road's changes. Even if you forget to press the damper button, Race is never crashy or intolerable. The ability to put power down is borderline unbelievable for a car of such performance, yet any traction transgression is communicated with such clarity that such an event is much less intimidating than would be imagined.

And that's the Ferrari's genius: it's a car of unparalleled eagerness, intensity and agility, one that's borderline feral at points, but also one that matches it with a sufficient sliver of usability and friendliness to ensure that any driver can get exactly what they want from it. That oft-discussed steering is freakishly fast, but the rest of the car is so in tune with and reactive seems almost to make your inputs swifter and more decisive, daft though that sounds, ably assisted by driver aids that remain unsurpassed in their subtlety and effectiveness. To drive a Pista quickly, or even as quickly as is reasonable on the public road, is an experience like no other.

The Porsche is right there with it, though, for tangible ability and subjective exhilaration. There are elements that improve upon the Ferrari, too: traction is even better, which is jolly useful, despite comparable power, torque and tyres. There's nothing to choose between gearboxes, either, the Porsche PDK perhaps even more decisive at points than the F1-DCT; the former feels more responsive to downshift requests, the shift speed of the latter may be a little quicker - both are exemplary. And both are better for their automatics, too; a manual would surely feel too laboured and sluggish in cars of such laser guided precision.

Where the Porsche succeeds is in feeling more immediately amenable and natural than the Ferrari, which is initially as welcoming to drive fast as juggling grenades. The Porsche does this with more relaxed, more communicative steering, less immediate turn in despite the four-wheel steer, and longer ratios, making it come across as just that bit less frantic to start with - handy when the rain returns.

The GT2's brilliance - and it really is brilliance, even by the standards of this test - is similar to that of so many Porsche Motorsport 911s; by paring back where needed, tinkering, stiffening and rose jointing where required, the driver is exposed to the sort of rear-engined Porscheness that Carreras have long since abandoned. But because it's so expertly, thoroughly, meticulously done, the fear factor is largely eradicated. The 911's quirks and idiosyncrasies can be explored and enjoyed, without feeling like they - or 700hp - will get the better of you.

The fear's not entirely gone, however; turn in where you did first time for the Ferrari and the Porsche just won't, pushing for a frightening split second before committing to the bend. Better to hold those impeccable brakes a little longer, lock the front end to an apex with great accuracy and make the most of the traction on the way out, which feels absolutely superb.

That engine is a fine accompaniment to the chassis, too. Perhaps it lacks the final per cent of response compared to that supernatural Ferrari, a tad less exotic overall, but once the flat-six has paused for breath momentarily it punches just as hard - if 700hp and 553 lb ft can ever feel conservative, it's here. Moreover, if the Ferrari's is the engine of greater potency, making more power and revving higher, it's the GT2's that might be more memorable, chuffing along with a 935-esque soundtrack (good news for the new one) and giving it a discernible, likeable character over the screaming 4.0-litre cars.

That the GT2 can do regular, do-it-all 911 almost as well as any other - road noise notwithstanding - makes its achievement all the more staggering. It demands, challenges and rewards like 700hp and rear-wheel drive always will, with a uniquely 911 tinge to that character, while also being civil enough to spend hours behind the wheel of. One morning in Wales isn't enough, naturally; such are the 911's reserves of talent, the layers of dynamic intrigue there to unravel, that it would keep a driver willing to use it captivated for months - years, hopefully.

Succinctly, the GT2 RS's combination of talent is such that it makes a Turbo S feel a little aloof, a GT3 inert and a GT3 RS slow - it really is sensational. GT2s may once have had a reputation for being spitefully handling cars, or mere straight-line blunderbusses, but no longer. By combining the very best elements of the very best 911s - raw but not unmanageable, demanding but not unruly, intense but not intimidating - then shoving it along with all this power, the RS sets a new bar for the turbocharged 911. Believe the hype.

Amazingly, though, it's the Ferrari that leaves the more lasting impression, which really is saying something. The Ferrari takes longer to understand, requires more of its driver and occasionally frustrates in a way the Porsche doesn't, but - you guessed it - will deliver moments of ecstasy the 911 can't quite match. It's that bit lighter, that bit faster, that bit more utterly absorbing to try and get the very best from; fractionally so, yes, but a noticeable amount nonetheless. The Pista brings together a mid-engined chassis of inexhaustible poise, a turbocharged V8 of unmatched ferocity and Ferrari's peerless mastery of dynamic tech; the end result is, if anything, more spectacular than that sounds.

There's a train of thought, one that would be very easy to subscribe to after this experience, that says the GT2 RS is the best 911 of recent times, combining GT3 RS focus with scandalous performance; the Pista, by comparison, might just be one of the best mid-engined supercars of recent times. As such, therefore, it's our choice here, by a margin as slim as its carbon seatbacks. Those with access to one, or indeed both, of these two for any amount of time should cherish every second - fast cars really don't get much better.