Home/Features/Features/Driving the Porsche 935 at Goodwood

Driving the Porsche 935 at Goodwood 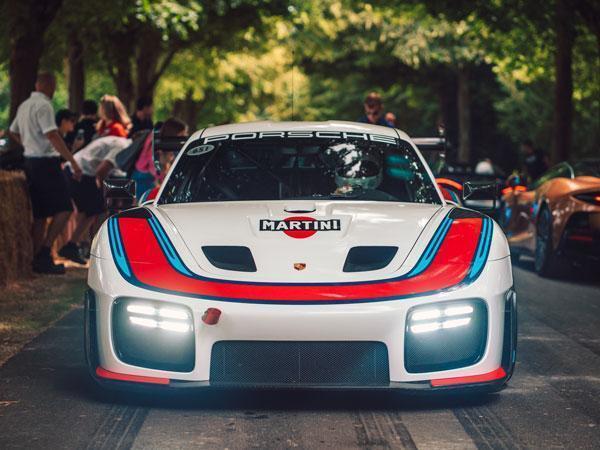 The Porsche 935 is a car revered in motorsport as much for its daunting design as for its dominating performance at Le Mans. The flat-nose, long-body and enormous wing combined to become an unmistakable force to be reckoned with, winning no fewer than 123 sports car races around the world from 1976 with the crowning moment, victory in the 1979 24 Hours of Le Mans, having gone down in racing history as one of the greatest ever. The best-remembered version, codenamed 935/77, was nicknamed Moby Dick for its elongated, whale-like tail – and the design became so fast that only an FIA rule change could end its sporting dominance.

That enormous legacy was the cause of celebration when Porsche’s GT department set out, on the 40th anniversary of the Le Mans victory, to recreate ‘Moby Dick’ in a new, track-only machine. Like the original, today’s tribute car – which is being made in 77 examples that are priced £750k each – is based on a turbocharged 911, albeit the 700hp 911 GT2 RS. And like the original, that fearsome base car’s rear-end and taillights remain visible through the extended bodywork, as if it had been consumed by a monster even more ferocious than itself. It looks fantastic in the pictures, but believe you me, to behold in the metal (and carbon), it’s even more imposing. You need perspective to fully grasp the eyeless flat-nose, hunched arches hiding two-metre-wide tracks and swooping rear end. Then it starts up.

The twin-turbocharged 3.8-litre flat-six under that tail is mechanically unchanged from the GT2 RS’s, as is the seven-speed PDK gearbox that it drives through, but engineers have made software alterations to enhance its characteristics for exclusive track use. What that means for its operation is not clear – not yet anyway – but with only 1,380kg to shift and the grip of gigantic racing slicks, we can safely assume the GT2 RS’s 2.8-second 0-62mph time and relentless rolling acceleration will be dwarfed. The 935 flat-six projects a raucous and extremely loud tone through its twin exhaust exits as if to confirm this, fluttering and shuddering on tick over like a proper racing car.

From the surroundings of the 935’s cabin, it feels like a thoroughbred prototype all right. Sure, the windscreen’s outline is familiar and there’s even a 911 GT2 RS PDK gear lever in this early prototype (the customer cars get a wood laminated knob as a nod to the 917), but the snug fit of a motorsport bucket seat, the tight hold of the harnesses and a view of the roll cage behind remove any association with an MOT-able road car. The digital screen ahead, also bespoke to the 935, displays water and oil temps that creep up as the engine ticks over and there’s a message about tyres flashing across the bottom, which is presumably a cautionary reminder that this car is wearing barely scrubbed in slicks. The pressures are also visible; the mechanics have kindly given me 2.3 bar (or 33 psi) all round, so the rubber should at least come in a bit quicker. That might knock a beat or two off my resting heartrate.

Anyone who’s been to the Goodwood Festival of Speed will know of the unrivalled access it provides. Hundreds of spectators flocking to the awning to absorb the 935’s foreboding presence and accompanying vocals are not the exactly what you want when attempting to ready your mind for the nerve-wracking hill climb ahead, though. And even though the Supercar Paddock is but a matter of metres from the Duke of Richmond’s driveway, the journey to the hill climb start takes over an hour thanks to delays; the wait meaning hundreds more are there watching our every move as we creep closer, which only serves to heighten the tension.

The 935 is, at least, familiar in operation at low speed; aside from the separate ignition kill switch and fire extinguisher controls, you start the prototype with the original key as normal and the powertrain functions as it would in a GT2 RS. The racing pedal box has unservoed brakes and the carbon fibre paddles behind the 911 Supercup-inspired wheel feel very different, but the only difficulty in trickling through the paddock is squeezing ‘Moby Dick v2’ through the onlookers. You sit so low and it’s so enormous that navigation here is mostly guess work. Thankfully, the hill climb course itself is a little more sparsely populated; only the start line marshal blocks the path as the seconds to the 935’s start count down.

It really shouldn’t be a surprise that 700hp through cold slicks equates to substantial wheelspin, even at about a third of throttle, as it does. But then the way the rears quickly bite, then dig into the surface beneath to rocket the 935 forward after only a slight wiggle of the tail, feels more like an afterburner’s kicked-in than combustion powerplant gaining traction. To say the motor spins to its redline quickly would be wrong; no, it explodes towards its limiter, with the PDK cogs fired into selection so instantaneously that there’s no perceivable break in thrust. The first turn is dragged towards you and those cold carbon ceramic brakes need a heavy squeeze before the brief fear of overcooking it is swapped for an instinctive, wide-eyed rotation of the wheel.

Loaded up under braking, the nose – even with those cold slicks – is so beautifully responsive, a miniscule slice of lock sending it towards the apex; what feels like milliseconds after, its charging through the second bend in front of thousands of spectators. If to them it looks like the driver knows what he’s doing, he doesn’t. He’s hanging on as the 935 demonstrates its monumental abilities, which include acceleration so savage that I’m off the throttle and squeezing the brakes as soon as we pass under the bridge; those hay bales do look awfully nasty, after all – and this prototype is Porsche’s high-miler 935 development car, which has survived to this point unscathed…

The remainder of the run consists of slow in fast out, letting the now slightly warm rears do the work and placing little pressure on the nose, because it’s almost certainly still wearing rubber well below the 100-degree operating temperature. Yet threading this enormous beast up the driveway, past the flint wall where its exhaust note reverberates off the stone, and down towards the finish, it’s enough to send the senses into overdrive. The chassis is so razor sharp, passing every grain of information from tyre to seat base and providing an unfiltered communication of balance so your inputs can be decisive, rather than reactive. After just a few turns the car’s already instilled enough confidence to push harder, but there’s too much to lose on this single run to up the ante. Although I’d be lying if I said I wasn’t tempted – that’s how approachable the 935 is, despite what it looks like.

Before I know it I’m charging over the finish line, the trees either side in a blur, then slowing before arrival to Goodwood’s hill top parking area, clicking down the gears to bring the 935’s enormous form to a halt alongside a Senna GTR, Vulcan AMR Pro and Zonda R, no less. It feels completely at home in this company, of course, but with added legacy thanks to that Moby Dick skin, which has already attracted more attention from the surrounding drivers. As far as track only machines go, then, the new 935 is surely as formidable as they come. After all, who wouldn't want to drive a Porsche that makes you feel like a Le Mans winner? To be £750,000 wealthier...