Litchfield has only just begun tuning the GR Yaris. The signs are already good... 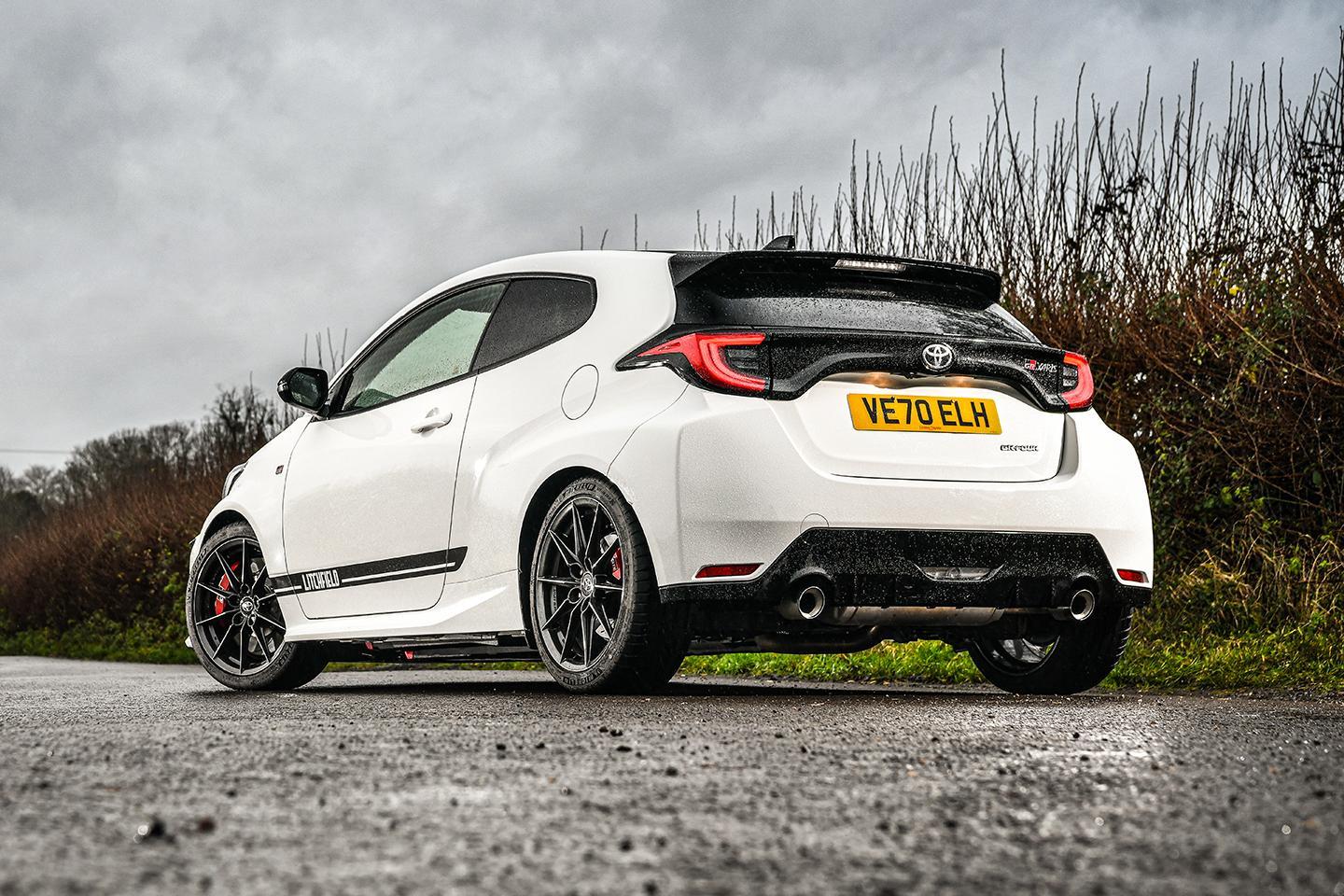 Litchfield's package of tuning upgrades for the Toyota GR Yaris is very much a work in progress. That's not at all surprising given how new the little four-wheel drive hot hatch still is. In fact, Litchfield must have moved at lightning pace to already have a full coilover suspension kit and a sizeable power boost more or less ready to go.

Having not one but two cars helped in that regard. While the black GR Yaris was on the dyno, the white car was pounding along Gloucestershire's finest B-roads on its trick new suspension. (Incidentally, both of Litchfield's cars have the optional Circuit Pack.) Later on, having two cars will help Litchfield's engineers hone and refine their various upgrades not only more quickly, but also with more precision. Detail changes can be made to one but not the other, thus enabling an immediate back-to-back comparison. Ultimately, reckons company founder Iain Litchfield, that approach will deliver better upgrades.

Very soon his firm will offer more substantial engine upgrades, including true ECU tuning rather than the plug-and-play box it's used to this point, plus uprated intake and exhaust systems. Litchfield points out that 400bhp wouldn't necessarily make a GR Yaris more fun to drive, although if somebody out there wants it, his company will gladly oblige. Not quite ready in time for my visit were new seat rails that will drop the standard chairs by an inch or so, perhaps a little more, thereby addressing one of the more commonly heard criticisms of the thuggish Toyota.

As I said in our recent video, I don't find the standard car's seating position a major flaw. Yes, you sit a little high, but once you get going you tend to forget about it, or at least I do. That's the key point for me - the seating position quickly ceases to be a consideration. However, very tall drivers say they can't get comfortable and others have pointed out that with a helmet on, there's no spare headroom whatsoever. An inch and a bit could make all the difference.

Litchfield is also developing entirely new seat rails that will allow owners to fit whatever aftermarket chair they like - a fixed-back Recaro bucket, for instance. I suspect Litchfield and his team will eventually turn their attention to just about every major component on the car. I'm hoping they one day hack the four-wheel drive system to send even more than 70 per cent of torque - the maximum currently permitted, in Sport mode - to the rear axle...

In the meantime, I will make do with the tuning box (which can be fitted or removed in minutes, and which enables owners to switch between engine maps using a phone app) that lifts boost pressure and raises power to a little more than 300hp and torque to 284lb ft (from 261hp and 266lb ft). There's also an ITG panel filter that adds useful low down torque by helping the turbo to spool up faster.

The suspension upgrades, meanwhile, I find far more tantalising. Gone are the standard springs and dampers, in their place Nitron NTR R1 coilovers, adjustable for bump and rebound through 25 clicks. They drop the ride height by around 40mm (a little more on the front axle), which makes the already moody-looking GR Yaris look a real bruiser. Somehow those swollen arches look even tougher when they're so much closer to the ground.

Litchfield has fiddled with the wheel alignment as well, doing nothing more complicated in the first instance than getting each one pointing in the right direction - always the first point of order after taking delivery of a new car because tolerances can be enormous. The company has plenty of experience in this area with front-engined, four-wheel drive cars having tuned Subaru Imprezas and Nissan GT-Rs over many years, and it's busy putting that experience to work on the GR Yaris as you read this.

'We wanted to make the car more comfortable,' says Iain Litchfield, confounding all expectations. Over a long motorway journey, he reckons, a GR Yaris with the Circuit Pack, and therefore the more unyielding suspension arrangement, can become a little tiresome. After some back and forth with Nitron he's arrived at a coilover pack that helps to smooth out the ride a little without harming the car's handling response.

We're talking degrees here - his car doesn't suddenly ride like a Lexus. But nor should it. A punchy back-road warrior like the GR Yaris should feel connected to the road surface, but it should be able to smother the worst of it while keeping the body under very tight control. That's exactly what the Nitron springs and dampers do. The body does still flick and kick about over lumps and bumps in the surface, but the sharp edges have been knocked away.

It's the damping as the car lands into a compression, or a series of them, that really stands out. Like the best Porsche GT cars it's as though the GR is sitting on a pocket of compressed air, blending iron-clad body control with a breathability over bumps. It's clever stuff. What's more, despite the significant drop in ride height the car doesn't scuff a tyre into the underside of a wheel arch, nor does it scrape its belly along the blacktop.

Those two-way adjustable dampers give plenty of scope to fine tune the ride to your own preferences, perhaps when heading out on circuit (a few clicks stiffer) or when setting off on a long motorway drive (a handful the other way). They were roughly configured down the middle when I drove the car.

Actually, I reckon that configurability is the better part of the suspension upgrade's appeal. What they don't change is the car's fundamental character. This GR Yaris is as keyed into the road surface as any other, so defiantly neutral that you wonder if it even knows what under and oversteer actually are. That's where its speed, or, more to the point, your confidence comes from. But I still find myself craving a little more playfulness on the throttle, particularly in the rear-biased Sport mode. As it is, you have to disengage your internal responsibility programme to make the little Toyota come to life on the road.

And the black car with the engine modifications? It definitely feels stronger, pulling more insistently through the mid-range and into the top end. It's not night and day faster, but you really do feel the extra urgency in every gear. Only when Litchfield and other tuners have cracked the ECU and upgraded the intake and exhaust systems will the really big power gains be found. For what it's worth, I think 300hp is as much as a car like this could possibly need.

The tuning box costs £600, the ITG panel filter £44 and the coilovers around £2,600 fully fitted and aligned (the exact price is still to be confirmed). 'As soon as Toyota announced the GR Yaris we ordered one straight away,' comments Iain Litchfield. 'A cancelled order at our dealership meant we could have two. We just hoped it wouldn't be all hype - and it's not, the car's brilliant. Like a lot of our customers we wanted a silly, four-wheel drive fun car, and that's what it is.

'We know a lot of people with supercar collections who have ordered a GR Yaris just because it's so exciting. The standard car is great but it does sit very high and the dampers work well in a narrow window, but not in a wide range. Those are some of the things we wanted to address.' With 300hp, a set of Nitron coilovers set up just so, the seats dropped an inch and a bit, wheel geometry dialled in... One of the most tantalising real-world performance cars of recent times begins to look a whole lot more appealing, doesn't it?