The off-road Plus Four looks even better in real life. But there's so much more to it than that... 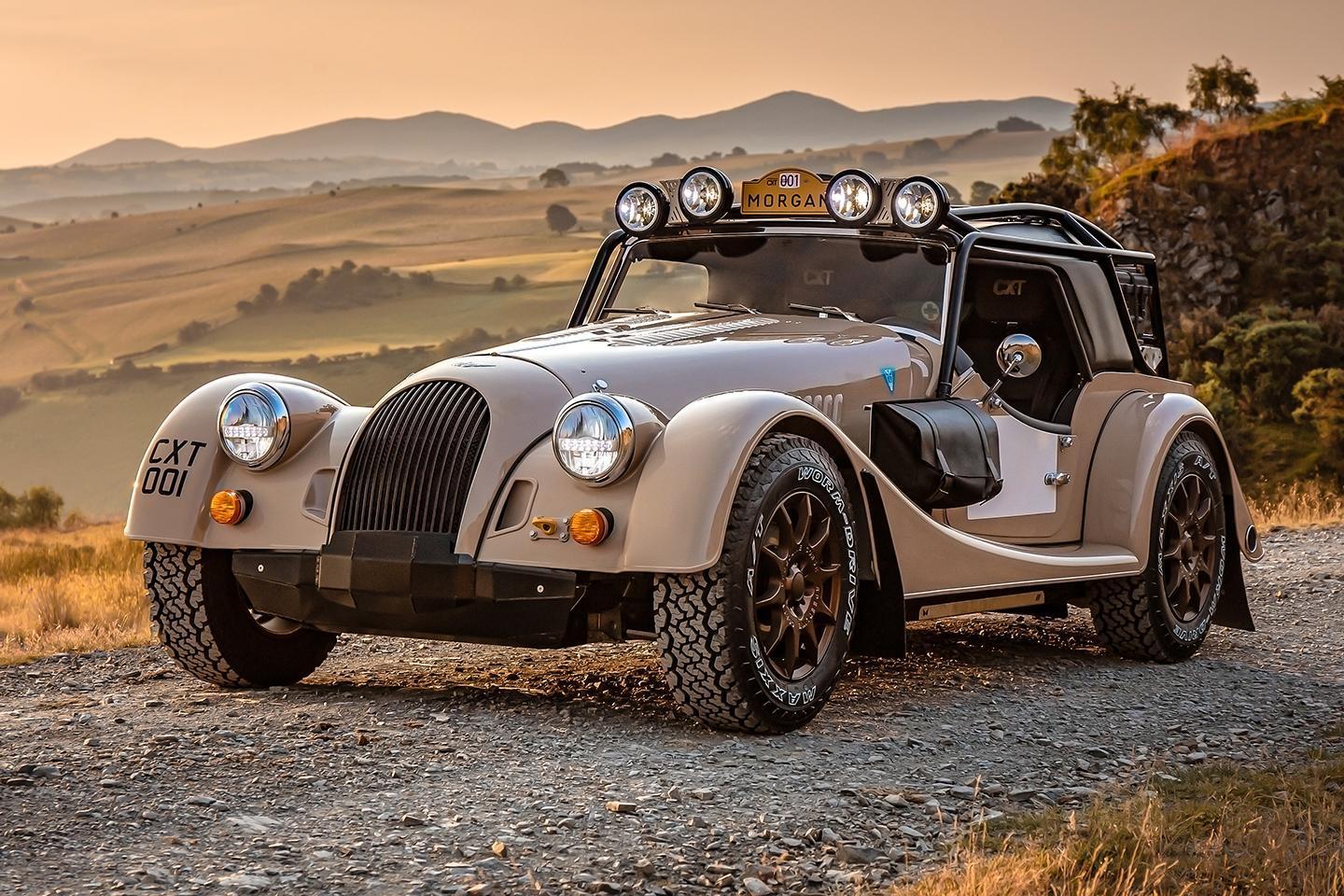 In a sensible world full of very sensible (but often quite dull) cars, the distinctly - perhaps wantonly - unsensible Morgan CX-T is most welcome. Aimed at evoking Morgan's overland heritage, but using the latest aluminium CX platform, the concept is arguably the perfect amalgamation of old and new. A designer's doodle greenlit by a senior figure at Investindustrial and built in collaboration with RallyRaid, the CX-T is the sort of creation we've all dreamed of (because lightweight off-road sports cars are always cool) brought to life for just eight customers. Consider it a gentrified Ariel Nomad. And who wouldn't want one of those?

In person, the CX-T is even more awesome than in the pictures, simply because there's so much to take in. While there are obvious, inescapable features - the spotlights, the roll bar, the spare off-road tyres - there are dozens more to appreciate besides. RallyRaid builds cars for Dakar, and tends towards that level of seriousness, but Morgan was keen for the project to be recognisably a Plus Four, so didn't want something crazily wide and high that merely kept the badges and pretence of being a Plus Four. Which sounds like a recipe for disaster (and argument) but has actually resulted in some fantastic solutions. See those two panniers on the wings, both made of very nice leather? One has the toolkit in, the other the air filter. Yes, seriously, as that's higher up than the standard location, helping the CX-T deal with fording rivers. The filter itself is used by RallyRaid on all its Dakar builds. The battery and electrics now sit higher, too, under a raised bonnet.

There are plenty more details like that. The map light inside harks back to the Morgans of old, now using a tungsten light bulb as RallyRaid know LEDs emit too harsh a light when it's dark; food pouches are again leather but velcroed to the seat because they're easy access when harnessed in; the first aid kit is affixed to the internal roll cage so both occupants can get it whichever way up the car is... Note as well the fixings on the roof for storing the windows, the rear end that can carry extra jerry cans (because the standard tank isn't great for exploring) and RallyRaid's preferred spotlight brand, but with a pouch (made of you know what) on the roof to store the covers. For homologation in certain countries it's illegal to drive with uncovered spotlights, see. Everything possible for any adventure has been thought of.

Consequently, the CX-T is a joyous thing just to ogle, but obviously an opportunity to drive one isn't to be passed up. The grey car here was a development mule for the regular Plus 4 as well as the CX-T, and has therefore lived quite a life, while the brown car will eventually be one of the customer cars (whoever you are, thanks so much). All CX-Ts use the 2.0-litre BMW engine as in the standard car, with 260hp and 258 lb ft mated to the six-speed manual, as every modification here is homologated for small series production - although there's no technical reason why a six-cylinder version couldn't happen. The most significant modification for driving, beyond the addition of 200kg of kit, is the fitment of a locking rear differential, which is essentially half a BMW xDrive system. It can go from fully open to fully locked, and has settings for whichever surface you end up on. Obviously it can't get where a proper all-wheel-drive off-roader would, but Morgan themselves admit to being pleasantly surprised at just how capable and durable the little CX-T has proved. Do your worst, basically...

Much is as you might expect from beyond the wheel, initially at least. The CX-T makes a right old racket (thank the repositioned air filter and exhaust for that), loses and regains traction really nicely with the diff and still feels nimble despite the extra weight. Even on a dirt oval you'd have a riot, but it's only when proper obstacles come up that the CX-T shows its real genius. The surface at Silverstone Rally School is appalling, cratered and properly rough, but the Morgan takes it all in its stride, to the extent that it's impossible not to try it faster and faster - just to see what it can do. Credit the new aluminium architecture for that, but also EXE-TC for supplying dampers to the project. Not heard of EXE-TC? As well as being the go-to people for dampers on any kind of motorsport 911, stage or circuit, it also supplied them for Mark Higgins' Isle of Man record Subaru, the Singer DLS and Jaguar's F-Type rally car. You want rally car shocks (and don't want to spend £10k a corner) you go to EXE TC.

The dampers in the CX-T are adjustable in both compression and rebound at high and low speed. Around what's a pretty slow layout at Silverstone the Morgan is spookily serene; save for the rocks crashing around and the engine blaring, everything else is level, each impact absorbed and dealt with. Even with some more confidence and speed, the CX-T shrugs things off like a dedicated competition car - which is the hallmark of a quality damper. And don't underestimate the appeal of doing all this while looking out over a traditional Morgan bonnet, one normally pointed at nothing more taxing than the gravel car park of The Fox & Hounds. Incongruous doesn't even cover it. Neither does hilarious.

There's even a tiny bit of trialling - muddy, bumpy grass in all honesty - to test the Morgan on, another challenge it dispatches with aplomb, the diff really aiding the traction being meted out by the all-terrain tyres. Now, obviously, Morgan wasn't going to set up the CX-T to fail for the nation's motoring press, but the car does appear to exceed expectations - and feels resolutely tough while doing it. Whatever challenge the eight lucky buyers have lined up for their cars, Morgan has likely risen to it. Exploring for a few days is certainly feasible, though hotels will be required - a tent is about the only not included.

Perhaps that's the key to the CX-T's appeal. Not only does this car open up the Morgan experience to a whole swathe of new environments, it's going to be at home in all of them. On a country lane, green lane or pit lane, people are going to be enthused by the sight of the Action Man Morgan. Rather than narrowing the Plus Four's appeal in toughening it up, the CX-T's array of talents only broadens the charm. Kept purely as a road car it would be tremendous entertainment, even if you would be missing out on a lot of fun. Yes, it's an awful lot of money - that's not in any doubt. But spend time learning about how the CX-T has been built and it's very easy to see where the cash has gone. All eight are sold, too, so clearly those customers have deemed £200k a price worth paying. People have spent more money on less entertaining cars. The CX-T is a riot.