Not the fastest model in the range, but is this actually all the 911 you need? 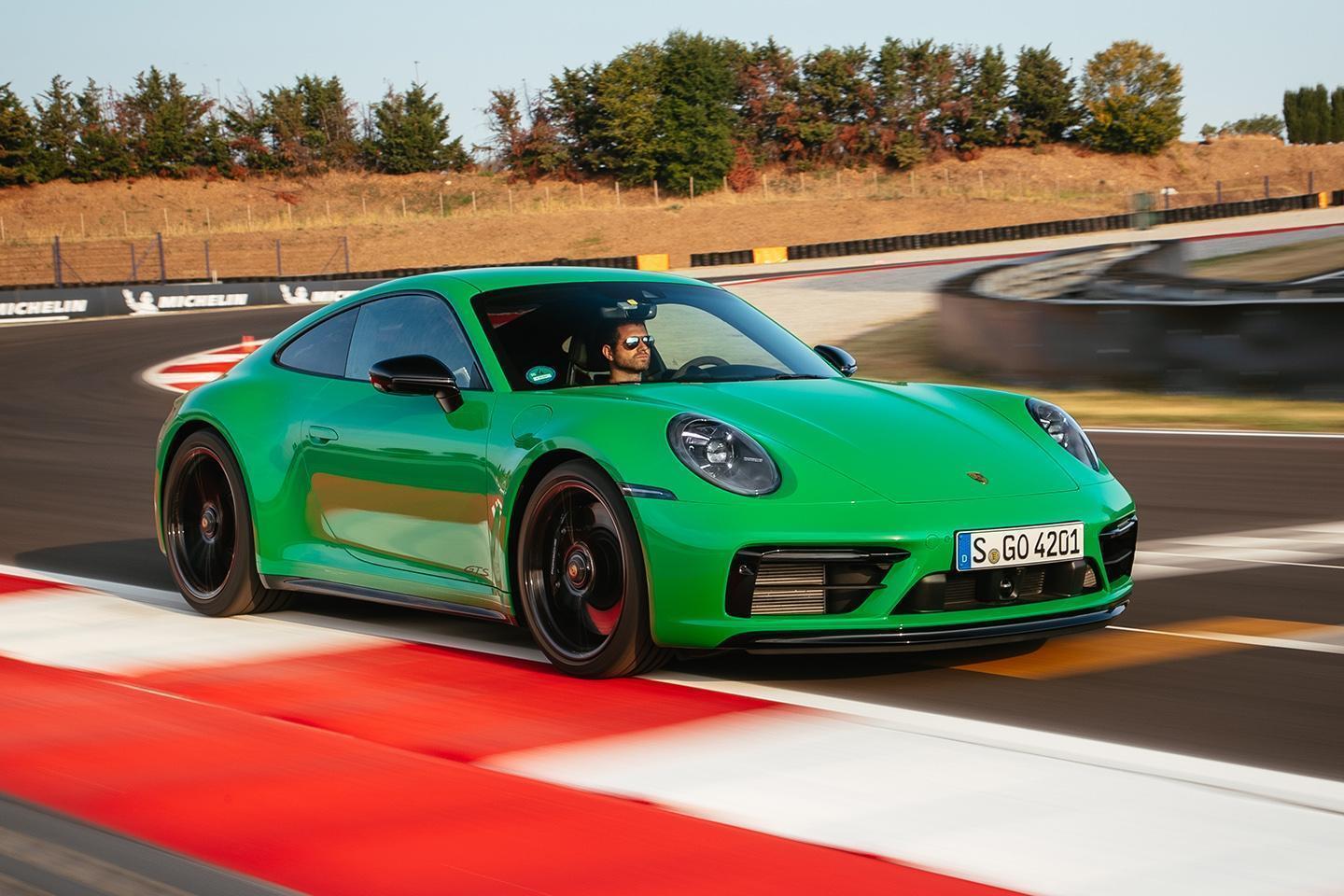 The Porsche 911 has always been a potent gateway drug. The journey up the model range is easily (if expensively) made, with each increment justified by the increase in performance, design, or exclusivity it brings you. Many trips to the company's configurator to daydream about a gently optioned Carrera 2 end up with screens displaying a fully loaded Turbo S.

Porsche would say that there are no wrong choices in the range, a point helpfully made by the bare bones press demonstrator it specced last year. But, let's be honest, some will always be righter than others, with previous GTS models often reckoned to be the sweetest spot for those unable to make the full stretch into Turbo territory, or to have enough incriminating pictures of a Porsche dealer principal to be allowed to get on the list for a GT3.

Porsche first used 'Gran Turismo Sport' branding on the 904 in 1963, with the intention of showing the car was designed for both road and track. 924, 928 and - less obviously - Cayenne versions all followed before the first 911 GTS arrived with the 997 Gen II facelift in 2009. It was successful enough to become a fixture in the range, with the 992 version seeing the simultaneous release of both rear-drive and all-wheel driven coupe and cabriolet versions, plus a Targa 4 GTS. Throw in the further choice between manual and PDK transmissions, steel or PCCB carbon brakes, roll-fighting PDCC chassis control and even a motorsporty 'Lightweight Package' and the GTS is starting to look more like a range than a model. And that's before you delve into the further intricacies of various à la carte dynamic options.

Porsche helped to simplify the review process by putting me into the most PH-appropriate models in the range. While some journalists were assigned to a variety of cabrios and Targas for the two bits of road driving on the Italian event, and looked about as glum as it was possible to be on a Porsche launch, I was lucky enough to score double coupes. First a relatively plush GTS 4 with PDK, then the car that a member of the PR team described as the event's holy grail: a rear-driven manual coupe with the Lightweight Pack and a full set of dynamic options. So pretty much both extremes of the roof-wearing clan.

GTS buyers have never got huge amounts of extra power, and that remains the case here. The same base 3.0-litre twin-turbocharged flat-six from the Carrera S is retuned to make 480hp, a 30hp increase, with peak torque rising from 405lb ft to 420lb ft. Though those numbers are still a way short of the current Turbo and Turbo S, it does mean this GTS has the same power output as a Gen 1 997 Turbo.

Yet that comparison sells the new car short, because it is considerably quicker than its illustrious predecessor. On Porsche's numbers the PDK-equipped all-wheel driven Coupe - the fastest car in the range - is able to blast from 0-60mph in just 3.1 seconds. And even the slowest of the GTS clan, a manual rear-driven convertible, adds just a second to that. Impressive though those numbers are, they only tell part of the story: yes, the Carrera 4 GTS can launch almost painfully hard, but the PDK version (that most buyers will opt for) also has the effortless get-up-and-gone thrust that comes from abundant mid-range torque and snappy gearbox software. It gives a completely different character to the naturally aspirated 997 and 991 Gen 1 GTSes which, although fondly remembered, always had to be worked hard to give their best. On the Italian Autostrada this one feels like a junior Turbo, with only a hint of constant-speed drone from the sports exhaust distracting from the refinement.

Cruising also gives the chance to confirm there haven't been many changes to the cabin. The GTS gets more Alcantara than lesser 911s - Race-Tex in Porsche speak - plus standard fitment of the slightly huggier sport plus seats. It also gets the normally optional thicker-rimmed steering wheel, which - like every 992 - obscures the outermost dials pretty much completely from any normal seating position. Porsche is also proud that the new PCM 6.0 infotainment system now features Android Auto. As I seem to be the only car journalist in the world not to have an iPhone, I was able to confirm that this works.

Don't worry: that's the worthy stuff pretty much ended. The Autostrada route led to Porsche's new Experience Centre at Franciacorta near Brescia, this incorporating an older 2.5km track built to FIA standards. Freshly resurfaced and barely used, the circuit's tarmac was dusty and short on grip, but the chance to drive both rear-driven and AWD versions of the GTS Coupe back-to-back offered an interesting take on the differences between them. Both were quick, shortening the dinky track's longer straights and using its many corners to reconfirm the eternal 911 ability to make big attitude adjustments with small alterations in throttle position. But the rear-driven car did suffer from noticeably more understeer on the green surface, the 4 GTS's ability to juggle torque through more wheels making it feel more agile, despite weighing 50kg more.

Yet, on on the more demanding road route that follows, the rear-drive car makes a compelling case for itself. The launch's holy grail seems to have had every dynamic option ticked, with the exception of the one that would have brought no-cost PDK, so PCCB carbon brakes, the full PDCC dynamic chassis system and the Lightweight Pack. This brings carbon-fibre reinforced plastic bucket seats, thinner glazing and a lightweight lithium-ion phosphate battery while ditching floormats and the rear seat. The total claimed weight saving of 25kg doesn't sound that impressive but, counter-intuitively, the pack also brings the compulsory addition of the heavier rear-steering system. It won't be available to order until later this year, but Porsche reckons it will likely cost around the same as the Turbo S's similar pack, which is £6,800. Given that rear-steer and the seats add £5,380 by themselves, that doesn't sound outrageous.

The angle of the sportier seat's fixed backrest initially felt a bit too upright, but within a few miles by spine surrendered to it and the rest of the ergonomic experience proved pretty much spot-on. As in the Carrera the manual gearbox is the slightly odd seven-speeder, which locks out its top gear unless selected from fifth. The gearlever is 10mm shorter than the regular cars, and although the action feels good it is still longer and a little looser than the older six-speed 'box of my 2009 Cayman S. There is also a rev-matching throttle blip function in both Sport and Sport Plus modes, although it is relatively easy to turn this off (or, if you prefer, energise it when the car is in Normal.)

There's never any doubting that the current turbocharged engine was designed primarily to work with an automated gearbox; apply throttle below 2,500rpm and there is the distinct sensation of turbo lag as the boost pressure builds - in Drive the PDK would always kick down to prevent this. But this becomes part of the driving experience, a small measure of the rawness that has been carefully engineered out of almost everything else. It sounded great too, the combination of the GTS's sport exhaust and the Lightweight Pack's skinnier glazing giving both a raspier top end and greater ability to appreciate it.

Lacking the GT3's double wishbone front end means the GTS is always going to steer and react much more like other non-Motorsport 911s; Porsche says most of its suspension is shared with the Turbo. But that's hardly a bad thing. Driving about as quickly as I'd ever want to on a public road there was no sense of the understeer felt on track, but both steering feel and throttle adjustability are still present. Even generally smooth Italian mountain roads produced enough rougher sections to confirm that both the Sport and Sport Plus damper settings aren't too harsh for road use. As performance cars get faster and harder and angrier, Porsche remains one of the few manufacturers to recognise the way they drive at lower speeds - and under gentler loadings - is as important as the way they demolish a circuit.

Even in its most turned-up form the GTS isn't a junior GT3, while the PDK equipped 4 GTS with softer seats could definitely pass as an understudy for the Turbo. Yet it's the rear-driven, Lightweight Pack car that's made a bigger impression on me, even if it is basically a turned-up and more track-biased version of the Carrera S.

Yet all those ticked boxes carry a hefty cost, of course: the GTS's £108,920 kick-off is soon expanded by an option workout. Ticking PCCB, PDCC and the Lightweight Pack will probably add £16,000 to that, before any consideration of extra-cost colours, plusher leather, an upgraded sound system or any of the other ways Porsche persuades missions to creep and configurator totals to spiral. But then the GTS has never come cheap; it almost always has, however, been the pick of the normal 911 range for well over a decade. On this evidence, that looks set to continue.