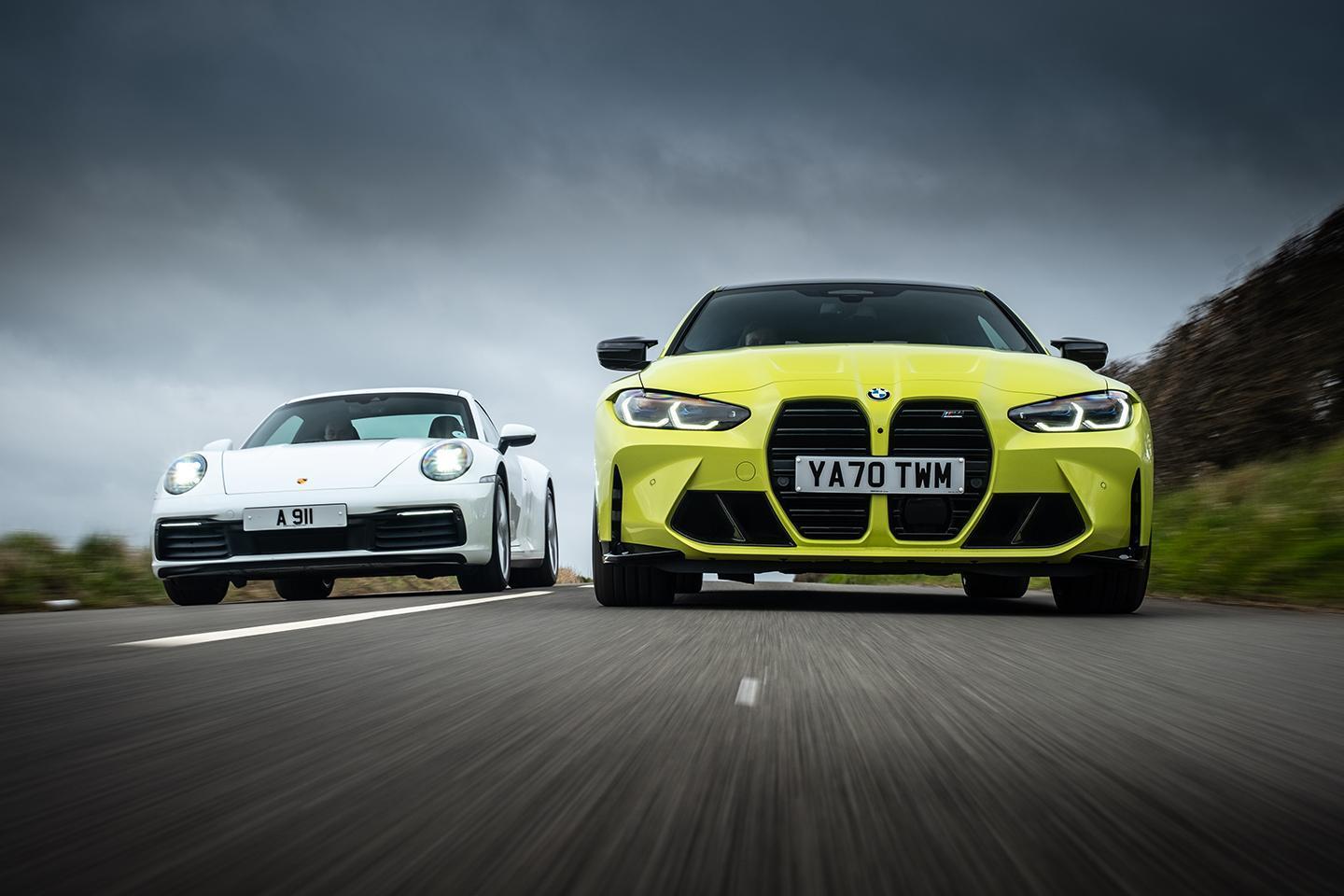 We love a bit of giant slaying, but that isn’t going to happen here. Because this comparison between two of the world’s most successful performance car dynasties begins with the unlikely revelation that the Porsche 911 enters as an underdog. That’s true on power – where it gives away more than 100hp to the BMW M4 Competition – but also, in this pairing, on money too.

The base on-the-road price of both challengers is still ten grand apart in the M4 Competition’s favour: £74,205 against £84,698 for the base 911 Carrera. But BMW’s press office chose to add another £13,540 of ticked boxes, with nearly half of that the £6,750 M Carbon pack, while Porsche’s has exercised parsimonious restraint. With just £1,803 in options this Carrera is the closest any of us are likely to see to a genuinely base 992. It would certainly be fun to see the response of one of the brand’s sales executives if you actually tried to order such a stripper. Yet the result is a 911 that’s more more than a grand cheaper than the optioned M4.

On visual punch, the BMW definitely earns the supplement. The M4’s radioactive Sao Paulo yellow is actually one of the no-cost colours, and does absolutely nothing to minimize the shock and awe generated by the startled squirrel front end. The exterior carbon pack is actually pretty restrained – bringing sealed weave for mirror covers, boot spoiler and various inlets and matching well with the forged double-spoke black alloys. But it’s definitely not a sleeper.

Parked next to the M4, the 911 looks positively self-effacing, balanced on the fine line that separates minimalist from cheap. The only visual changes made by the modest options spend on this one are a high-gloss black 911 logo (£101) and gloss metal trim for the side windows (£333). The understated look is mostly carried off, proof how good the basic 992 shape is, but most buyers would likely dig deeper to upgrade the standard 19-front, 20-rear alloys to one of the chunkier 20-front 21-rear options.

The Porsche’s cabin is similarly unadorned, but isn’t missing out on any essentials. The chequered cloth Sport Plus seats look good enough to persuade me I really would take them over leather, and although the dashboard features plenty of black plastic the interior doesn’t feel gloomy, or that it has been deliberately cheapened to punish non-upgraders. The boggo Carrera gets the same crisply rendered 10.9-inch touchscreen, nice-feeling climate controls and part-digital instruments as its pricier sisters. A modest £194 extra has brought this one the same thicker-rimmed GT steering wheel as fitted to more senior members of the clan. The lack of a rotary Drive Mode selector on this is hardly a big omission given the ability to change mode through the touchscreen, and the separate presence of Sport, damper and stability control toggle switches. My biggest ergonomic grumble is one common to the rest of the range, much of the digital instrument dial panels are obscured behind the steering wheel in a normal seating position.

The BMW feels like more of an occasion on the inside, the event in question possibly being an S&M convention. There is leather and carbon on pretty much every non-glazed surface, and with the carbon pack bringing the addition of composite-shelled bucket seats with such massive lower bolsters it is genuinely hard to climb into them. They also feature a bizarre carbon mini tray in the lower cushion which seems primarily intended to trigger urologist jokes.

Yet, seats aside, the M4 Competition’s cabin certainly feels special, and even without this car’s Comfort Pack standard equipment is impressively comprehensive. The biggest struggle for buyers is likely to be getting their heads around the expanded complexity of the configurable dynamic settings. As with previous M cars the M4 has M1 and M2 steering wheel toggles to shortcut pre-assigned preferences. But beyond that is the need to deal with both an M-Mode button, with Road, Sport and Track modes that mostly slacken the driver assistance settings, and a separate ‘Setup’ button that brings up a touchscreen interface offering mode selection for powertrain, chassis, steering and the e-boosted brakes. Throw in two-stage stability control deactivation, the further addition of the variable M Traction control, three levels of gearshift severity and a switchable exhaust and the permutations are almost endless. You could spend years chasing the perfect set-up and possibly still not find it.

While their dynamic characters are entirely different, both cars have clearly evolved from earlier generations. The 911 remains the performance underdog, giving away 123hp to the M4 and – although the Porsche’s 4.2-second 0-62mph time is only three tenths slower, on road it doesn’t even feel close to being close. The Competition has the legs everywhere, with more low down torque and a much more muscular mid-range, it doesn’t rev quite as high as the 911 – and it’s bassy soundtrack has plenty of muscular menace but lacks the Porsche’s zingier top end. Nevertheless, if you pick your performance cars in terms of raw performance, the BMW is the clear winner.

Yet the M4 is also bigger and heavier, a difference that feels very obvious back to back. The Competition’s 1,800kg kerbweight isn’t egregious by segment standards – it is 20kg less than the AMG C63 S Coupe – although it does mean we now live in a world where a BMW M4 weighs more than an E39 M5. The 911 is a substantial 220kg lighter, and that difference feels very obvious on the twistier and more three-dimensional parts of our West Berkshire test route.

The Competition’s dynamic cues are firm and solid. Steering feels hefty in all of the switchable modes, ditto the e-boosted brake pedal. Low-speed ride is hard as well, but adding pace and chassis loadings quickly turns the M4 truly special. It copes brilliantly with broken surfaces, and even the Sport Plus chassis mode doesn’t make the damping feel excessively harsh. But the physics of persuading so much car to change direction are obvious, too - especially in tighter corners and over mid-bend crests.

The 911 takes a much more softly-softly approach. Its chassis has less mass to control, but it also delivers discipline with a much gentler touch. So there’s more sense of body movement over bumps and compressions, but the dampers use the wheel travel to keep order with less apparent effort. The Porsche is only 35mm narrower than the BMW, but the difference feels much greater down a tight-fitting road thanks to the Carrera’s keener responses.

Both cars have brilliant steering, but take different routes to excellence. The BMW’s combination of hefty weighting, crisp responses and spot-on caster feel makes the better first impression; it gets very close to the sense of connection from the E60 M5 rack which was my previous M car high point. It’s exactly the sort of steering you want in a car so capable of lurid oversteer.

The Porsche’s assistance is more generous and off-centre response feels slower. But longer exposure proves it is every bit as accurate as the M4, and that there is also proper feedback behind the lightness – including a fair amount of the sort of chatty communication that EPS systems tend to filter out. Pass between two bits of tarmac with slightly different surface textures and the 911 will tell you about it.

The M4 Competition’s hooligantastic tendencies have already been widely celebrated, yet even when travelling on public roads at sane speeds it feels edgy and exciting. Much of this is doubtless down to the very real challenge of trying to get so much torque through a pair of driven wheels. But some of the sensation of impending oversteer is being deliberately created by the torque biasing rear differential, something that – in the punchier dynamic modes – can make a low-intensity 60mph sweeper feel like Competition is on the edge of a heroic drift.

Of course, actual oversteer is available too, all the way up to the sort of tyre-shredding that gets the biggest scores on the in-build Drift Analyzer app, and which we didn’t attempt in the real world. At lower speeds the rear-driven Competition does struggle for traction, and even with the stability control fully engaged the more aggressive dynamic modes will allow some rear axle slip. On dry roads and on nearly new Pilot Sport 4S tyres this was well contained and amusing. But the combination of slippery conditions and worn rubber will doubtless be more of a challenge; don’t be surprised to if the forthcoming AWD version gets a high uptake.

The 911 is much less willing to relinquish grip, but almost equally throttle steerable. Power oversteer is pretty much off the agenda given the abundance of mechanical grip from the rear axle; even with the stability control switched off the Carrera had near unbeatable traction in tighter corners. But chassis finesse is remarkable, and almost perfectly balanced between front and rear. Like the best of its predecessors, the 992’s line can be radically altered with small inputs, easing its accelerator fractionally at the edge of adhesion on a faster turn can have as much effect as stamping the M4’s to the bulkhead.

Which, writ large, is the divide that pretty much sums up this clash. Your choice of rosette recipient is likely to be driven in large part by how you order the list of sports car priorities. The Porsche is subtle and understated next to the BMW, slower and less exciting, but also the purer driving experience. The BMW is louder and lairier and more thrilling, even when you might not always want it to be. The 911 is a better all-rounder, the M4 Comp a more exciting choice.

There’s another difference, of course – and one that will likely play a substantial role in perceptions. The 911 Carrera is definitely the cheapest car in its range and the M4 Competition the most expensive, an important distinction in this image-conscious part of the market. There’s no doubt that the M4 Competition has earned the right to be compared to the most famous sports car of them all, but the actual overlap between the two ranges remains a small one.