Is losing its top the R8's making or breaking? One way to find out!

The Audi R8 Spyder is the heaviest, slowest and, arguably, the R8 for posers as much as drivers. But I'm not far into my drive before thinking it could be the best yet.

That must make me a shameless poser then. Given my first action before departing the launch venue was to press the noisy exhaust button and my second was to drop the roof I guess that would confirm it. But I'll work on the basis most people buying a V10-powered open-topped supercar aren't doing so to slip under the radar. Call it the roadtesting equivalent of method acting...

The coupe version of the R8 with which we are already familiar is a more than satisfying steer. But, as previously discussed, there's a danger its all-round competence rather saves the best of the show for onlookers rather than the driver.

Its highlight remains that naturally-aspirated 5.2-litre V10 engine; the R8 and the Lamborghini Huracan with which it shares its powertrain and hybrid carbon/aluminium Modular Sportscar System platform likely the last atmospheric-engined mainstream sports/supercars we'll see. May as well make the most of it. 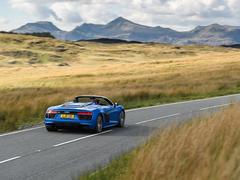 As per the coupe the main differences between V10 and V10 Plus, other than the power, include different gearing to group the first six ratios together and use seventh as an overdrive. In the Plus they're evenly spaced. The Plus also gets standard ceramic brakes over the regular 'wavy' steel rotors, carbon blades and mirror housings, a rear wing, fixed-back seats and an additional three-way Performance selector in addition to the four-step Audi Drive Select, bringing the total 'satellite' button count on the wheel to four. These can be optioned onto the Spyder of course and all but the 'race' seats and rear wing feature on our test car, bringing the price to a burly £164,240 in total - see below for full details.

One other number rather stares out, that being a kerbweight of 1,795kg with a not especially powerfully built 75kg driver onboard. Audi points out this is 25kg less than the previous V10 Spyder and the structure is a claimed 50 per cent stiffer but it's still 125kg more than the already pretty hefty coupe, 70kg heavier than the closely related Huracan Spyder and rather exposes on the "lightweight" claims of the aluminium Audi Space Frame construction. 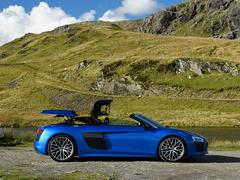 We've got used to modern cars being heavy though and manufacturers have got very good at hiding the extra flab behind a girdle of technology, helping you forget that with a mate and a bit of luggage onboard an R8 Spyder could easily be a two-tonne machine.

At a superficial level it certainly doesn't feel burdened by excess kilos either. The noise from the V10 definitely helps here, the dramatic flare of barely silenced revs on start up setting the scene. Once over its dramatic warm-up cycle it quietens down but you'll likely be straight on the exhaust button to make it loud again. Because the engine's theatrics are a defining feature and, arguably, pack a more emotive punch than the 911 Turbo's additional power.

It also rather exposes the curious argument made by a few keyboard warriors that a TT RS is basically a half-price R8 because it's only a tenth slower to 62mph. It's not. The R8 is a genuinely dramatic supercar with an engine to match, the like of which we likely won't see again. And the Spyder lets you enjoy it to the full, even if you keep the hood up and just drop the small vertical rear screen to savour the sound effects.

It's rather more exciting to drive than a TT too. Peak power is at 7,800rpm and you don't get your full torque quota until 6,500rpm, 1,500rpm beyond the point where the 911 Turbo has given you its best. So you need revs. And a bit of space to wind it up. But the response to the throttle and the sensations it unleashes means that is no hardship, the (now compulsory) S Tronic dual-clutch seamlessly blurring shifts and acceleration into one thrilling crescendo. Well, it would were it not for such things as wanting to maintain a grip on your licence. Because opportunities to really let rip are frustratingly few and limited to the odd overly-dramatic squirt here and there. 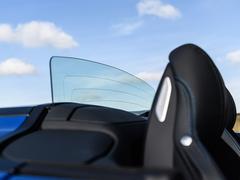 And throughout all this you're never aware of the extra kilos. It might weigh nearly as much as an

but in driving style it feels more like a computer simulation of a plus-size Lotus Elise. Which is no mean feat.

The stiffness of the structure helps, there being a very Audi sense of solidity to the R8's construction and no nasty shudders or wobbles even when attacking properly evil stretches of British B-road. It's near-impossible to praise Audi quality without slipping into cliche but in both style and the way it's screwed together there's plenty to delight the occupants, if little to particularly surprise. The Virtual Cockpit display is really, really good, the button-strewn wheel actually makes some sense and pretty much every interaction with the car feels satisfyingly well thought out. Roof up it's quiet and refined, roof down just the right side of windblown to be exciting without making you wish you'd put the hood back up for the motorway sections. It'll do its thing at up to 30mph too, increasing the scope for switching on the fly.

The harder you drive the Spyder the more you realise why features like Dynamic Steering, the sports exhaust and Magnetic Dampers (available separately but saving over a grand when bundled into the Sports Plus Package) are required to contrive that sense of agility. Of all the plethora of modes available the only two you really need are Comfort in Audi Drive Select for mooching and 'Dry' on the Performance Control (if you specced it) for maximum attack. This locks out the Dynamic Steering to a fixed ratio and is as close as you can get to genuine feedback from the car. Which is to say not a whole lot. 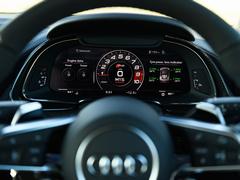 This also sets the dampers to their firmer setting but it never gets unruly, flowing beautifully with the road without even a hint of secondary thump or shudder. It also relaxes the stability control a tad, experience of the coupe on track suggesting it can be provoked into some angles once you navigate past the default understeer. You'll be going some to get even a hint of this at road speeds though, the 'reverse Haldex' powertrain configuration rear-biased of course but more dedicated to keeping you on the straight and narrow than the first-gen car.

It's accordingly very, very fast and extremely capable. If possibly a little remote as a result. Meaning the R8 Spyder is best savoured as an overall experience, rather than purely a driving one. Something it pulls off with arguably more success than the coupe.