The M car we've been waiting for, or left in the shadow of the M4?

We all know what we want from the

. It needs to keep the

, build on the high standard set by the

and be sufficiently more desirable than an

. Just imagine how good that car might be, one that successfully combines all those M car elements. Then picture a car that surpassed those expectations. The M2 is the latter - it's simply magnificent.

Let's start with the styling. Though it of course looks good in the press pictures, they really don't do justice to how well it works in the real world. At least as real world as California gets, that is. It's brimming with aggression, from the first corner of the engorged intakes to the last millimetre of the quad exhausts. But where the 1 M's aesthetic sometimes sat oddly with the gawky 1 Series Coupe, the M2 forms a more cohesive and attractive whole. One of the sexiest M cars ever? Must be up there.

The interior is pretty sombre by comparison. It was always going to be, really, but besides some Long Beach Blue stitching, a flash of Alcantara and some M badging, it's very much a 2 Series cabin. From here you won't find any complaints - it's sensible and stylish - but it's easy to imagine a few wanting a touch more glamour. 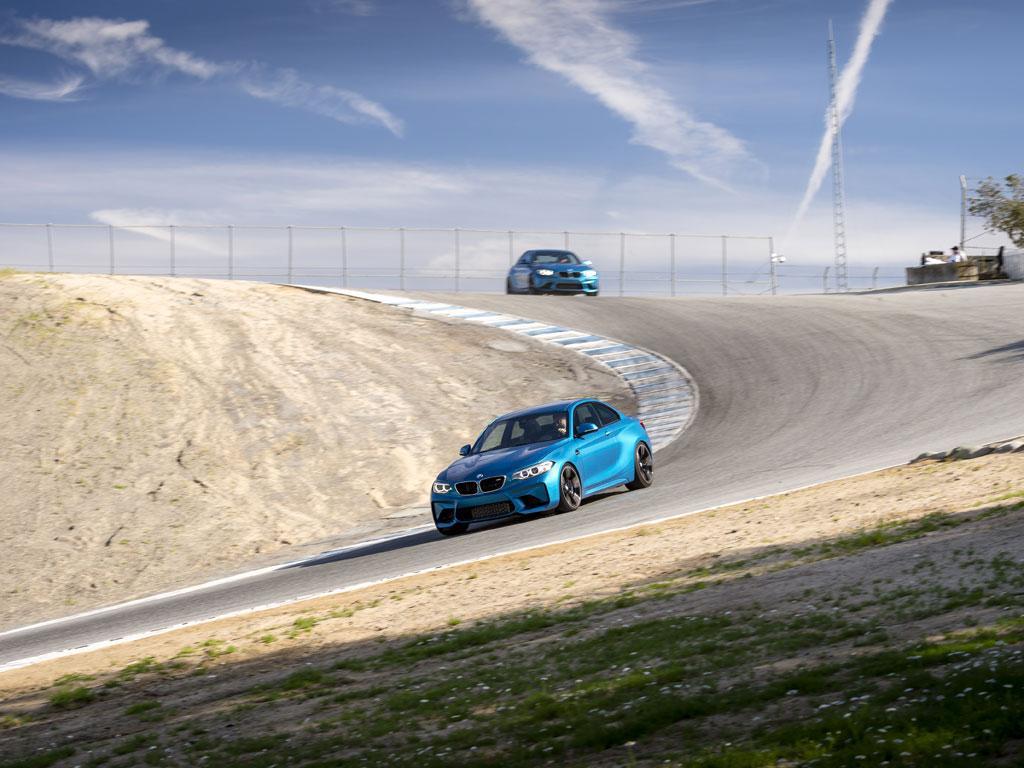 Enough of it as a static object; what's the M2 like to drive? Bloody brilliant, in two words, but it deserves way, way more detail than that. If you were worried that in 2016 BMW is overly concerned with MPVs, SUVs and SACs (that's Sports Activity Coupes), the M2 will allay those fears faster than you can say 220d xDrive Active Tourer.

You sit low in a heavily bolstered, properly supportive seat, staring forward to dials that read to 7,500rpm and 180mph. The wheel isn't overly chubby (as BMW's can be) and the straight-six starts with an angry rasp. Even without Laguna Seca out of the windscreen - yes, really - the M2 sets the right tone.

"All the M4 good bits with problems addressed" is my first note for the M2 track driving. It's that good. Like the M4 it has a superb front axle, one that seems almost impervious to understeer and therefore garners huge confidence that you will make the apex. It's directed by steering that feels far more natural than the M4, with much less of the gloopiness and artificial response that blights that car. It's still not the most detailed - name a modern car that is - but for speed and weight it's spot on. Praise be, it's a BMW that you can drive in Sport+ without moaning about the steering.

Sport+ also brings a sharper throttle with the heavier steering, as well as more aggressive shifts if you've got the optional seven-speed dual-clutch gearbox. A couple of points to note here: one is that the modes do nothing to the suspension - this is an M car with fixed rate dampers. An interesting choice we will return to shortly. But also the transition from Comfort to Sport mode feels subtle, with nothing ramped up unnecessarily to give a false impression of performance. Of course there's an argument that one good set-up would cover every base, but this is certainly one of the most convincing multi-mode drivetrains. 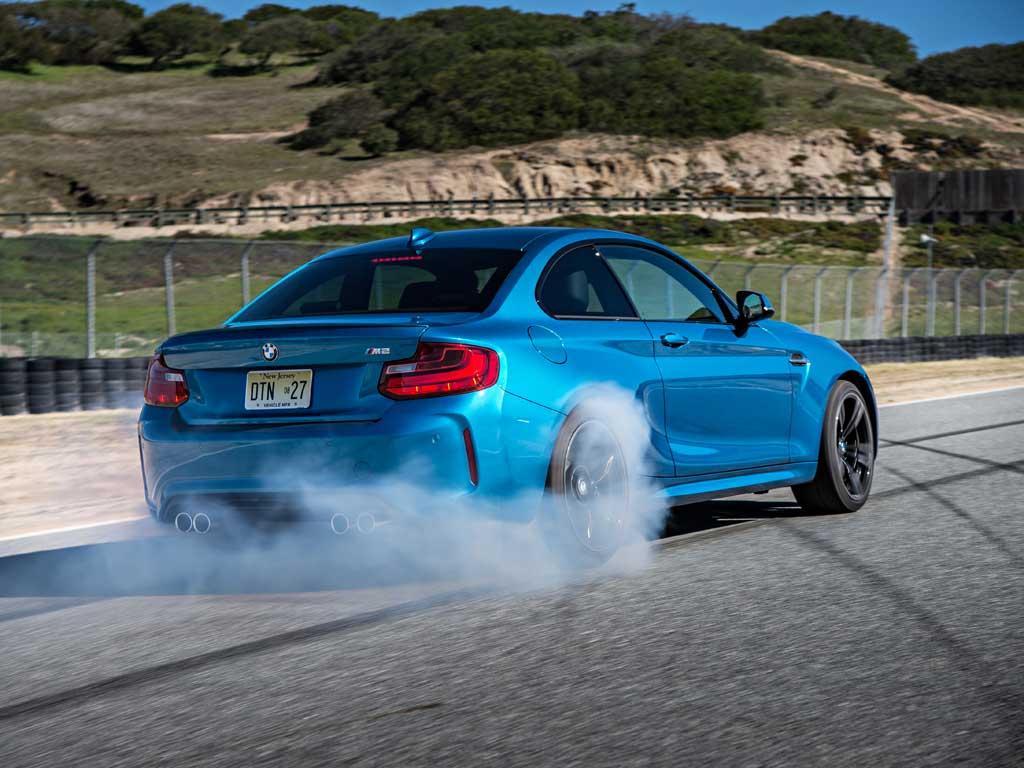 The majority of the track time is spent in Sport+ with manual gearshifts, where the M2 is absolutely fantastic. The steel brakes remained up to the job, only beginning to squeal very late after other journos had lived out their Gran Turismo fantasies. The pedal is progressive and the performance excellent, really helping to nail that fantastic front end exactly where you want it. They're also handy when you're charging towards the Corkscrew at 115mph for the first time...

Anyway, what's so rewarding about the M2 on track is that it feels staunchly rear-driven without ever being intimidating. The relationship between the mid-way MDM stability control mode and M diff is perfectly judged, giving you, as the driver huge confidence in the car's behaviour. In the quicker stuff you can feel the outside rear powering the car out, while at slower speeds it permits a sensible - yet hugely enjoyable - amount of slip. They're lovely sensations, those that we crave as enthusiasts and praise rear-wheel drive for. It feels nimbler than an M4 and rotates quickly thanks to a shorter wheelbase, but the whole process feels oddly less frenetic than in the bigger car.

In this majestic dynamic show, the engine arguably doesn't shine quite - quite - as brightly. It lacks the ferocity of the M4's engine, not punching so hard at high revs or responding quite as sharply. The M2's single turbo straight-six delivers tremendous performance, but in a very linear fashion. That being said, it still hauls from 1,500rpm, revs enthusiastically and is so damn fast. If 62mph takes less than 4.5 seconds, it must be below 10 seconds for 100mph. The noise is great as well, a fascinating array of turbo gurgles with straight-six howl, certainly aggressive enough to match the styling. Like the M4 it might be even better outside too, with a real motorsport edge. 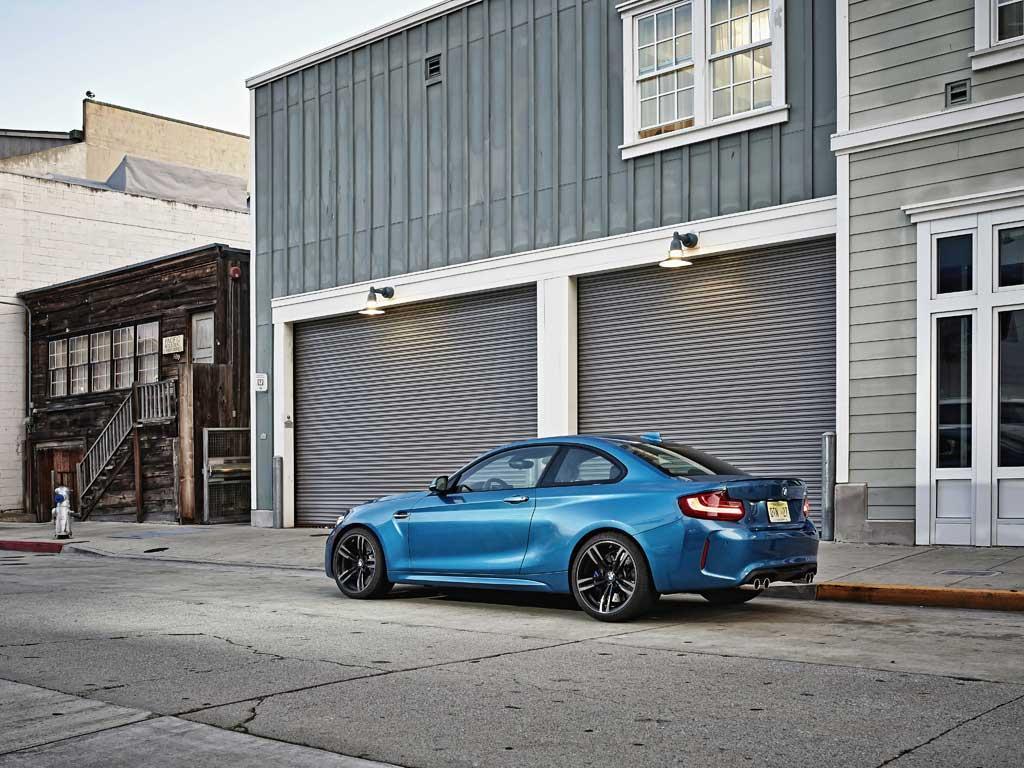 Fortunately, it's equally terrific on the road. And this is on crummy tarmac akin to that found in the UK too, not just US highways. The passive suspension set-up certainly isn't shy, but the damping is brilliantly done. Like the 1 M, there's that impression of the M2 bullying its way down the road, yet with greater composure and finesse. It deals with some bad imperfections flawlessly, body movements in check and the tyres always in contact with the road, clawing grip from the surface. Given the M4's damping issues on bumpy roads, the M2 is a revelation. Combine it with the smaller footprint and it's significantly more rewarding on the type of roads UK buyers will use it on. Bring on Wales!

Furthermore, the engine is far more impressive away from the circuit. Because you're not chasing every last rev, the punch it offers from low down becomes more relevant and more rewarding. Knowing the chassis can deal with it means it can be more readily exploited too, rather than nervously working the throttle as in the M4. And it feels faster on smaller roads. And it sounds louder. And...

Finally, just as a last convincer, the manual is even pretty good. Seriously. Sure, it won't rival a Cayman GT4, but it's a tighter and more precise shift than we've come to expect from BMW.

So the M2 is pretty good then. Beyond an engine that maybe won't be remembered as an M great and wondering how it might drive with a few kilos less, the M2 is an absolute triumph. It not only questions the need to buy an M4, but also how much more you would realistically want from a performance car. For involvement, ability and sheer fun factor, there isn't a better way to spend £45K. There will be cars that deliver a tad more on circuit and a little extra refinement on the road, but none will provide such a broad and beguiling combination of talents. Best of all, and very much unlike the 1 M, there will be as many M2s built as customers want. And you definitely, definitely want one.