Freshly announced, and we've already had a go... 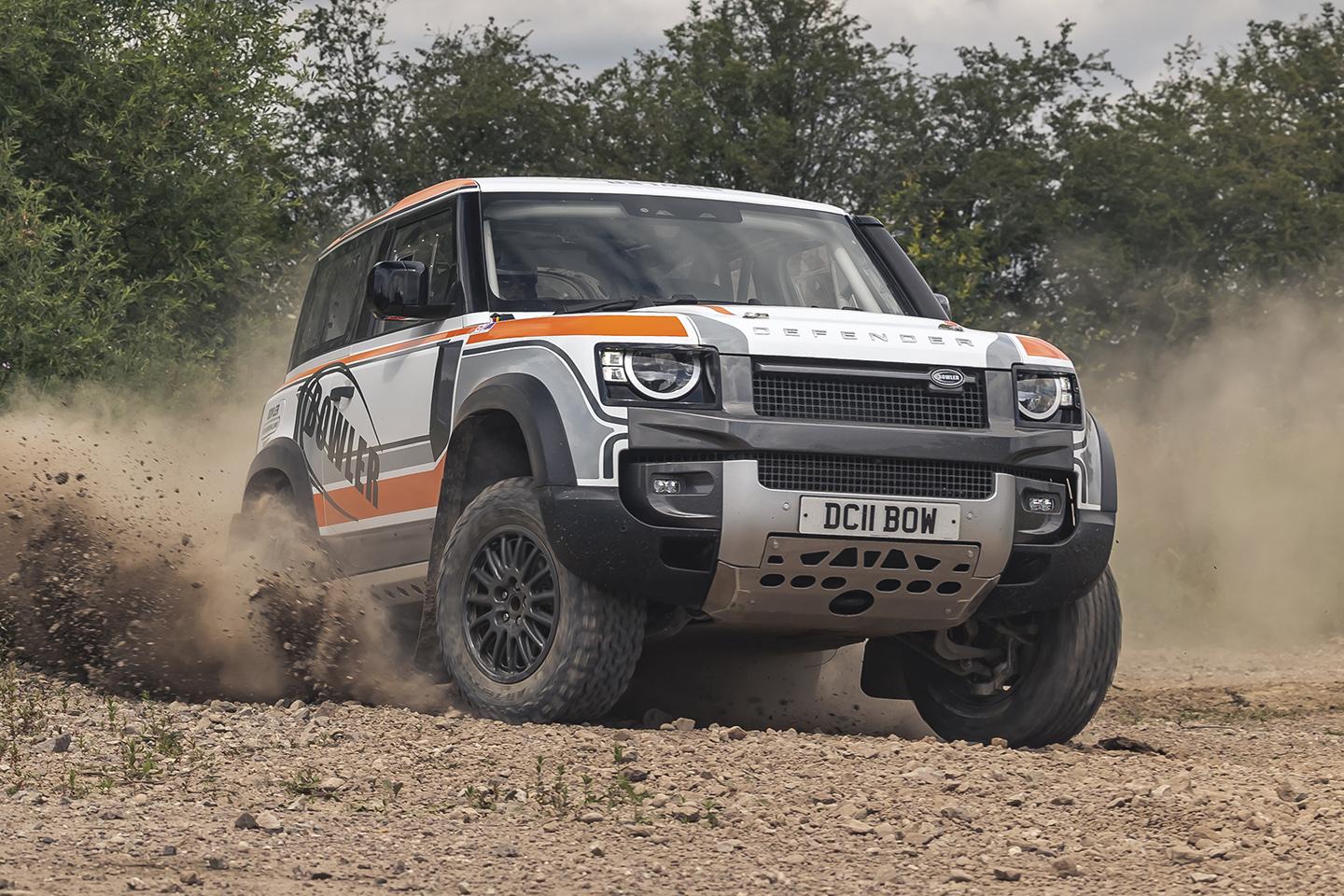 As anyone who has ever been to a lawnmower race knows, some of the most exciting and closely-fought motorsport happens in the least likely vehicles. A Land Rover Defender rally car isn't in that league of eccentricity, but it certainly feels like a non-obvious thing to do when looking at the bluff sides of Bowler's take on the new Defender, set to compete in its own championship next year.

Bowler has previously proved the concept, or something close to it, with the long-running Bowler Challenge featuring lightly prepped versions of the previous Defender. These competed in a range of both rallies and off-road events and, although performance from the 2.2-litre diesel engine was always limited, events were well subscribed and often closely fought. We had a drive in one back in 2014.

Bowler went into administration in 2019, and was quickly acquired by Jaguar Land Rover as part of the Special Vehicle Operations division. Beyond the fact the smaller company now enjoys much deeper access to its parents' engineering expertise, and is under the control of Calum McKechnie, who previously ran JLR Classic, little seems to have changed. It is a still a small, enthusiastic team working on making Land Rovers go quicker.

While obviously less potent than the V8 powered Frankenbeasts Bowler is most famous for, the new Defender Challenge car is much quicker than its predecessor. It uses the basic P300 four-cylinder petrol powertrain for reasons of cost and fixability but, and also as McKechnie puts it, "because 300hp is more than enough to be interesting in one of these."

Most of the rest of the road car's mechanical package has been carried over, too: eight-speed autobox, standard diffs and driveshafts and even the regular brakes, these still featuring ABS. Traction and stability control has been mostly coded out of the car's various electronic systems. Suspension features coil springs that are both stiffer and 25mm taller than those of the regular base Defender, plus fully adjustable Fox Racing dampers with separate reservoirs.

Structural changes are bigger, principally the integration hugely strong FIA-standard roll cage integrated into the car's structure. The bottom of the regular 90's doors have also been trimmed to increase clearance and reduce some of the potential for repair costs. In the road car these lap over the sills, but 70mm has been removed, the Bowler gaining tough-looking sill defenders instead. Underbody protection includes a sizeable guard at the front, and the regular Defender's two low-hung supplementary radiators have been removed (and replaced with a single XL cooler) to prevent damage from flying rocks.

The cabin has been stripped and gained motorsport buckets and an Alcantara-rimmed steering wheel. The gear selector has been relocated for easier access, and Bowler has also created a single paddle shift that sits on the side of the steering column (when development started no road Defender had paddles, and the V8's are integrated into its airbag steering wheel.) Oddly, the two touch panels from the regular steering wheel have been saved and are now mounted on the dashboard - they control too many functions to be dispensed with. The complexity and deep integration of modern electronic systems is also demonstrated by the fact the demonstrator still has a working radio tuner - but no loudspeakers.

My drive takes place in a corner of what is now JLR's Fen End facility - formerly RAF Honiley - on a course that combines dirt tracks with open scrubland to replicate the sort of environments the Challenge car is likely to encounter most often. Beyond the need to step up, getting into the Bowler's cabin is easier than the competition norm: even a sizeable roll cage doesn't fill the Defender's voluminous interior. The driver's seat is predictable low, but also further back than I'm expecting. It's also positioned inboard compared to the regular Defender, giving a slightly offset driving position I soon get used to. There's also some mild surprise to be seeing analogue instruments in place of the digital dials that even relatively lowly road-going versions get. A big plus is the continued presence of air con.

Basic operation is unsurprisingly easy given the road-going powertrain - stick it in Drive and burble off. Floored launch acceleration is impressive, even the base Defender is more than respectably rapid and the knobbly Baja Champion tyres dig plenty of traction out of the loose surface. But within the first lap of the impromptu course it's clear the Bowler isn't about raw accelerative forces so much as the ability to carry speed over unlikely terrain.

There isn't much point in trying to rev out the engine, which is designed for torque more than top-end zing. Bowler's test driver Dave Marsh reckons that many competitors will just use the automatic's Sport mode, which should ensure it is in the lowest available gear when the accelerator is stamped - as it will be for most of the time the car is being pointed in one direction. The single paddle shifter - forward for down, backwards for up - also requires acclimatisation.

Despite its combination of a short wheelbase and a high centre of gravity the Bowler feels much less nervous than I'm expecting under cornering loads, turning with impressive assurance for something so big and square, although with predictable understeer at optimistic entry speeds. It can be persuaded to turn under braking, but as the standard Defender set up lacks any front-to-back adjustment the Bowler doesn't have the easily controlled slideability of a rear-biased rally car. Nor do the open differentials do any clever torque juggling under power. The Bowler isn't spectacularly sideways, even when Marsh gives a demo run.

But it does feel close to unstoppable when flung at savage terrain. Ride lacks the pillowy compliance of something like a Ford Raptor over ruts and jumps, but the combination of big suspension travel and no-nonsense dampers can defuse sizeable vertical loads without complaint. And it will do it repeatedly, too - McKechnie says the prototypes have been subjected to hundreds of miles of abuse to try and break them. Speed is down to building trust and getting an eye for differing types of terrain and working out which lines (and surfaces) will suit the car best.

In tighter and twistier stuff the Bowler doesn't feel much more agile than a standard Defender - the P300 is actually a bit of a hoot on a loose surface. The difference comes with velocity, and the Challenge's ability to digest rough stuff at speeds at which would either destroy the regular car's suspension, or bounce it into the scenery.

Nor is the Bowler ludicrously expensive for what it is. The £99,500 buy-in includes both VAT - normally left off when motorsport prices are quoted - and entry to seven rounds of the Bowler Challenge next year, with 12 places available. That is almost exactly the same as Land Rover is asking for the new Defender 90 V8. The road-going car is plusher and faster and will doubtless enjoy sturdier residuals. But it couldn't be more fun than this one.