JLR has established its Classic Works division as a dream factory, but does its remade V8 Defender live up to the billing? 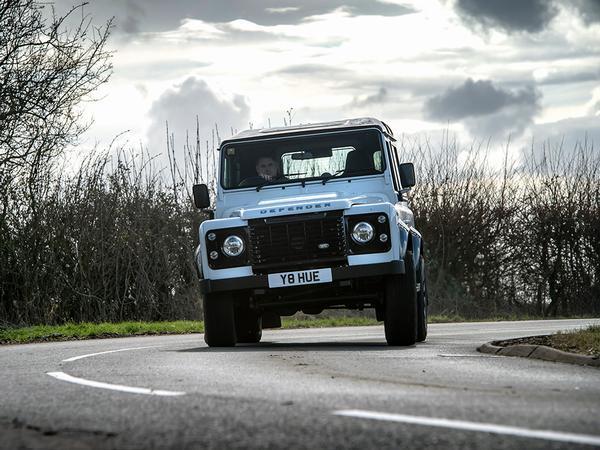 From the outside, the Jaguar Land Rover Classic Works facility looks much like the other large warehouse-cum-workshop buildings that populate Prologis Park Ryton, a thriving business estate just south of Coventry's southern bypass. There's some fancier signage than Network Rail has treated its nearby distribution centre to, but other than that it's a smart-looking but fairly standard 14,000 square metre industrial unit - one constructed so recently that it's still a building site in some Google street view angles.

On the inside though, it's a shiny, swaggering sensation. Part showroom, part service centre, part car collection, part manufacturer, this where JLR has consolidated its fast-growing heritage operation. So in one corner they're servicing XJ220s. In another they're building Continuation D-types. In another, as part of the Reborn programme, they're restoring Series I Land Rovers. Armed with only a passing interest in cars, the place would be fascinating; for a PHer, it's like being invited inside a goose bump.

Much of the life blood of the place, of course, was pre-existing - the people and the cars sequestered and tended to elsewhere. It's the size and brilliantly lit newness of the place (not to mention the business plan that underpins it all) which contributes a new layer of gloss to proceedings - one that leaves you in no doubt about the kind of profit being turned by 54 individual workshop bays. JLR says it's the largest purpose-built facility of its kind in the world. Who knows if that's true - but anything capable of making Ferrari jealous is liable to be fairly special in some way.

It is from this backward-looking, forward-thinking, steel-framed Mecca that the Defender Works V8 is slowly emerging. Its backstory is by now well known: Land Rover having already revealed that it has gone to the trouble of sourcing 150 (nearly new) examples of the car - in a mixture of 90 and 110 wheelbases - with the intention of re-engineering them to produce a modern-day version of the original V8, a highly-prized model last seen in 50th Anniversary format. Gaydon considered such a thing when it was still making the Defender at Solihull (going far enough to enter the prototype phase) but for various reasons the idea was never green-lit.

Now, with capacity available at Classic Works and a customer base entirely non-plussed by the idea of handing over at least £150,000 for a 90, the V8 lives again - powered this time by a naturally-aspirated version of the 5.0-litre supercharged petrol unit that helped make the SVR versions of the

vividly memorable. Plainly it is at the heart of the Defender's appeal, too, but - as Steve C found out when he briefly tried the car at Geneva - its virtues are only worth considering in the light of the other changes made by its creators.

Charging a six-figure sum for a secondhand car gives your engineers rather a lot of scope, and it is to Classic Works' credit that its painstaking conversion has been less about making the Defender improbably fast (which has been done elsewhere, ad infinitum) and more about making it a better-rounded and more driveable product. Consequently, once the warm 'n' fuzzy feeling of hearing and feeling a V8 squirm on its mounts has faded, it's the first few hundred feet on the car's bespoke suspension that really take the biscuit.

Bouncing around like a runaway jackhammer made the Defender seem rawboned and tool-like - and was unassailably cool in low doses - but tiring to the point of tedious over distance. Making it seem a little less gaunt (without losing the cool) was high on the Classic Works' agenda, and it has succeeded marvellously. A far more more cultivated combination of variable rate springs and Bilstein dampers has reduced the chassis' belligerence by maybe 40 per cent; meaning that it remains rugged and uniquely busy - yet never to the extent that it feels like your head is being steadily worked from your shoulders.

This has the effect of making the Defender seem far more settled, especially on challenging roads. And it is made to seem all the more transformative by a new steering box, which, while doing nothing much to eradicate the extraordinary amount of lock required at T junctions, has mostly seen to the disconcerting amount of play previously experienced while doing nothing more ambitious than going in a straight line. The rate of response remains extremely slow by modern standards - but this is not a platform which responds well to breakneck changes of direction at speed, and the Works team considered a drastically wider track too unsympathetic.

Instead the V8 gets slightly more substantial anti-roll bars to help it around corners, along with (for the first time) 18-inch wheels. Around those larger rims you get BF Goodrich All Terrain tyres, a feature which - on tarmac at least - means the Works' Defender has a fairly modest grip limit built-in. This is appropriate, because 405hp is rather a lot, and while its handling certainly has a more sophisticated edge, a Porsche Macan this is most definitely not. A level of intent much beyond middling will have the front end under serious pressure, typically resulting in an amber-coloured lasso being flung over the engine's 380lb ft of torque by the stability control.

The remedy for this - in direct violation of current thinking - is to stop expecting gravity-defying miracles from a humble and high-sided 4x4, and start enjoying the V8 for what it can do: namely transport you from A to B in a way that has you endlessly revelling in its maverick status. Precious little of this has anything to do with outright speed; the Works' Defender hustles along just fine - but wilfully exceeding 90mph or 4500rpm is unusual. Better to dip into the V8's performance lazily and laconically, like a lion swatting at flies.

Better too to do it in manual mode. It goes without saying that the eight-speed ZF gearbox (a less intrusive presence in the cabin than one might think) gifts the car a step-off and oily upshift totally unlike any former inhabitant of the transmission tunnel, yet the adjoining engine is best enjoyed when you pick the ratio yourself, letting the revs build from low down without the possibility of a proactive downshift from the impatient auto-mode.

Even without its blower, the V8 is very responsive - and also wisely liberated from the fairytale exhaust note made familiar by SVO. Rather it is industrial and industrious, and urges this better, worthier, lovelier Defender ever onwards as you prod lethargically at the lever, arm propped on the window frame, half in this century, half in the last. Meeting in the middle has taken Land Rover 70 years and it's oddly befitting of the once hare-brained firm that it has materialised on cue from a shiny new building that deals almost exclusively in the specialness of the past. Yet more appealing is the idea that even in its final throe, the Defender - in spun-off, expensive, formidable and very exclusive format - embodies Land Rover's current ambitions no less succinctly than the Series I did in 1948. Assuming this is farewell, it's a wonderfully fitting one.