Remaking the Stratos has taken over a decade and requires the sacrifice of an F430. Still, you would... 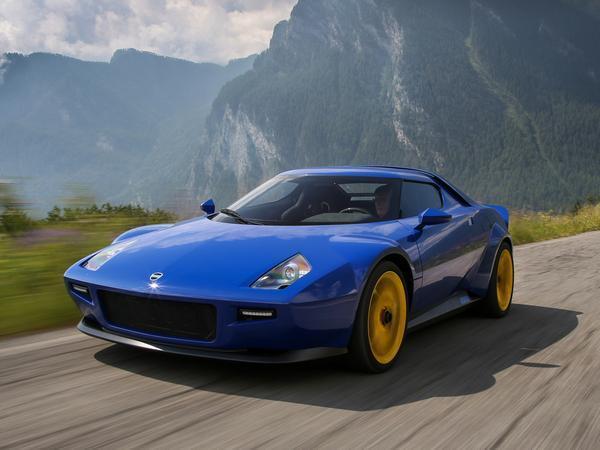 Even when it's mud-smothered, flaunting a rank of bug-eyed spotlights and mud-flaps worthy of a Scania, the Lancia Stratos is still one of the most startling supercars of the seventies. The visual competition is strong too, in the unmissable shapes of the Lamborghini Countach (Marcello Gandini designed both), the Lotus Esprit, the Ferrari Testarossa and the De Tomaso Pantera - but none packed as much compactly purposeful muscle into so a short a wedge.

The Stratos was compressed, wide, spotlight festooned and dangled with mudflaps because it was the very first car designed specifically for rallying, its mid-mounted engine Ferrari's Dino 2.4 litre V6, its windscreen helmet-visor wide to allow rallyists a better view of the stage they were assaulting. Quite often, though, drivers like Sandro Munari and Bjorn Waldegard would be seeing the way ahead through the Lancia's side windows, so acute was their angle of attack. This was a car all about drama, then, and a car of which only 492 were allegedly built, just shy of the 500 road-going versions needed for homologation.

Despite the protracted fading away of Lancia, a willfully neglected brand dying this year, the Stratos remains famous and indeed inspirational, to the point that designer Chris Hrabalek, his father an avid Stratos collector, built a full-size concept car 13 years ago. Displayed at the 2005 Geneva show the Fenomenon Stratos, striking for its split windscreen and its very credible update of the Gandini design, is the car that triggered the birth of the machine you see here. Although there's been a lot of water under the bridge since. Prodrive was an early possibility for building the car, but ultimately major automotive components supplier Brose got involved, boss Michael Stoschek ultimately commissioning Pininfarina to turn the concept into a fully functioning prototype.

Not only was that prototype finished to a high standard, but Stoschek held a press launch for it at the French Paul Ricard race circuit in 2010, his thought being to produce a limited run of cars. It was an ambition further fuelled by the positive reviews that the car received. It certainly carried the basic ingredients of an exceptional road weapon beneath its skin, being based on the innards of a Ferrari F430, and the case of Stoschek's demonstrator, a Scuderia no less. This was no mere rebodying either, the wheelbase shortened to echo the proportions of the original Stratos while much of the cladding bodywork was fashioned from carbon fibre, which had the effect of the strengthening the car by 50 per cent, lightening it and shifting the weight distribution to around the ideal 50:50.

Certainly on the Paul Ricard track, where this scribbler sampled that car back in 2010, the Stratos went very well, making the possibility of a short production run all the more mouth-watering. But those cars never came, Ferrari apparently vetoing the supply of the necessary mechanicals despite having supported the project up to the point, even allowing testing at the Fiat Group's Balocco development facility. That might have been the end of the story, were it not for the unexpected appearance of the very same black New Stratos appearing on the Manifattura Automobili Torino (MAT) stand at this year's Geneva motor show.

It's appearance signaled the restart of the project, lead by Paolo Garella, founder of MAT and former Pininfarina employee. There he had been heavily involved with the development of Stoschek's Stratos, considering it to be 'one of the best one-offs built at Pininfarina.' Garella is not new to car-building - besides his involvement with over 50 new car projects, many of them at Pininfarina, his MAT enterprise has built road and track cars for Scuderia Cameron Glickenhaus, and the Apollo Arrow, developed out of the Gumpert model of the same name.

So as before, there's no shortage of expertise behind this revived Stratos. MAT has produced a first demonstrator - another was in build when we visited MAT on the outskirts of Turin - and it is this blue-bodied, yellow-wheeled machine that we are about to try in the foothills of the nearby Alps, our anticipatory excitement only heightened by the fact that Garella elects to drive us there first.

From the passenger seat it's easy to sense the highly advantageous power-to-weight ratio that stems from applying 532hp to a kerbweight of only 1350kg, and to enjoy the magnificently panoramic view provided by that distinctive wraparound windscreen. More obvious than any of this, though, is noise - more of it than most of us would want, and more of it than I seem to remember from the drive in the 2010 car. It's there, explains Garella, because of the handmade (and highly expensive) Capristo titanium exhaust, which not only transmits the explosive effects of eight cylinder combustion, but fires resonance and vibration through the Stratos's high-strength structure with wearing zeal. Happily, this is a flaw easily fixed.

And when we reach the mountainous entanglements of roads near the Sestriere ski resort, it's a lot easier to overlook the dramatic aural intrusions and enjoy the sensation of stretching this legendary remake on the kind of roads that the original was built for. The widescreen view adds to the excitement, as does the scope for quick-firing your way through the gears with a pair of sizeable, fixed-position carbon fibre paddle shifts. Surprisingly, really tight turns still put the 'A' pillars in your way - no doubt I should have been attacking these with the kind drifts that allow you to see the way ahead through the door windows - but the unimpeded view you enjoy through less tightly radii'd turns is a pace-heightening delight.

So is the feeling of immense robustness that you get from a car whose rigid core structure is bolstered with a canopy of roll-cage-integrating carbon fibre. Not all is quite right, however. Apart from the yelling noise, vibration and harshness, you'll notice the Stratos pitching slightly from front to rear, and that sharper bumps are all too evident, prompting you to drive around them. Garella is well aware of this, and plans a 10 per cent stiffening of the rear suspension, while admitting that changed wheel sizes have spoiled the base F430's impressively effective small bump absorption.

What isn't diminished in the rebirthing of Stratos out of F430 is the Ferrari's fantastic potency and its engine's range. At 4000rpm the V8 will be pulling pretty hard, yet it's only halfway towards its 8000rpm boundary, the climb to the limiter marked by a still more ferocious accumulation of revs and indeed, momentum. You'll need to press the middle pedal with zeal to shed some of this, but the brakes are well able to arrest your pace. They have steel rotors, incidentally, rather than the pricier carbon variety.

So more dynamic polish is required, and some smothering of that over-assertive exhaust, but we know both from the F430 itself and drives in the first New Stratos that this is a car with real capability. It's well finished, too. You'll spot a mix of F430 hardware - the rebranded steering wheel, complete with Manettino, is Ferrari, and much of the dashboard is F430 too, including, sensibly, the air conditioning controls. But the instrument binnacle differs, emulating the brushed aluminium sheet into which individual instruments are sunk, as per the original.

True, the wheel, and your hands, will regularly eclipse several of these dials, but this is a welcome retro rework. Another rework applies to the dampers, the original Skyhook system of the F430 replaced by an adjustable Bilstein system, which has the merit of being adjusted entirely independently of the Manettino, thus separating damper control from the map choices for engine, transmission, the e-diff's traction activities and the ESP. The F430 engine is tweaked too, in the interests of generating more low-speed torque, a critical requirement in the original Stratos and useful in this car too.

So, a real tempter, when the final tweaks are complete. You'll need a breath deeper than the V8's twin plenums can draw for the next bit though, which is, you will have guessed, the price. The bulk of which is the £487,000 plus the small matter (well, smallish relative to that £487k) of the £70-80,000 that you'll need to buy a used F430. Add a few tens of thousands more for a Scuderia, if you can bare to semi-break one.

An expensive car then, but for those after a blue-chip reinvention of one of the greatest supercars of the '70s, and one rarer even than a Scuderia, something to consider. It's a mad price, you may think, but there are many more madly priced machines out there that have found owners. Let's hope, then, that this time, the 25 get built.