How better to reveal the new JCW to the world than as ... hang on ... an automatic? Surely some mistake?

To have a new car fall at the final furlong seems strange after manufacturers spend hundreds of millions on painstaking development, but it happens more than you think.

Welcome to the wonderful world of PR SNAFUs. In the past these cock-ups have included everything from under bonnet BBQs, bizarre electrical gremlins and sat-nav disasters to very public failures of safety equipment, like the autonomous braking system that infamously didn't 'see' the stationary truck in front. 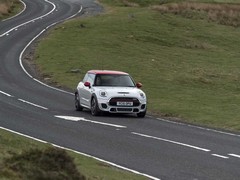 So to the new Mini Cooper JCW. There's a gleaming array of the fastest and

ever made awaiting us. And all of them are automatics. Every single one.

JCW? More like WTF. We all know if you can get past its retro-kitsch looks the resurrected Mini brand has, since 2001, consistently produced some fine hot hatches. Especially those branded John Cooper Works.

One memorable JCW Mini I drove managed to understeer like an old Bluebird on remoulds one minute and oversteer like a fully-lit F40 the next on a bumpy B-road. Forget 'flow', here was a car that was up for a fight to the death against cambers, crests, ridges and mid-corner bumps. If you liked a challenge then you loved the JCW. If you didn't you bought a Clio.

True Brit?
But that's set to change because tens of thousands of the new Mini JCW's development miles have been carried out right here, on British roads.

Weighing in at just 1,205kg for the manual (yes, they do make one!), the new JCW has had more than an ECU re-flash to produce its 231hp. There's a bigger twin-scroll turbo, a new induction system and the front fog lights have been deleted to make way for a new cold air intake. The exhaust, meanwhile, is specific to the JCW with a larger diameter mid-section that's made from thinner metal to reduce weight. There's also a new silencer that reduces back pressure, with the added benefit of making the JCW sound great too.

The substantial re-engineering extends to the chassis, which wasn't always the case with the old models. Both the front and rear have bespoke springs and dampers, new geometry and stiffer bushings plus strengthened and lightened supports. The JCW even gets some fancy hydraulic engine mounts, as well as big 330mm Brembo clamped front discs.

Sadly, despite the big bump in power, Mini engineers haven't added a full locking mechanical differential - instead, the old e-diff with torque vectoring carries over. To help reduce torque steer there are unusual, for a transverse front-wheel drive car, equal-length driveshafts that engineers devised using an intermediate propshaft running under the engine. This helps feed the torque more efficiently to both wheels and, Mini claims, also provides far better steering responses.

Manual labour
As before Mini predicts 80 per cent of all JCWs sold here will come with the slick rev-matching six-speed manual. The remaining cars - and the fleet assembled for the press launch - use the optional six-speed Steptronic auto. Blame America for us being temporarily denied the manual. Full production of the JCW doesn't start until next month and the first batch was produced to satisfy the long line of countries (like the US) where buyers have little respect for the art of the third pedal. 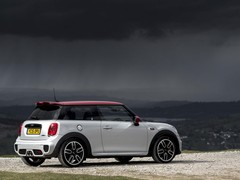 Shame. At least the automatic is fast, faster even than the manual. It takes just 6.1 seconds to hit 62mph with a top speed of 153mph (against 6.3 seconds and 155mph for the manual).

There's a 15kg weight penalty for the auto but Mini, to its credit, has tried to make it as enthusiastic as possible. In manual mode it holds gears to the redline and doesn't throw in a downchange until it's almost about to stall.

Behind the wheel, the Mini still feels a cut above most of its rivals. The quality of the cabin overwhelms but those new bucket seats are mounted far too high and, in a masterstroke of ergonomics, the new head-up display was completely obscured by the steering wheel rim when set for my driving position.

Smoothly does it
Pull away and the gearbox is smooth in its normal setting - strange for a hot hatch unless you're a Renaultsport Clio 200 owner, that is.

Initially, the Mini's steering rack feels too quick - old Alfa fast - but you soon adapt and begin to relish its response and precision, if not complete lack of feel. Up the pace and the automatic dishes up some enthusiastic changes, only its tardy downshifts letting the side down. Flick over to manual and the Mini JCW becomes a real B-road weapon. 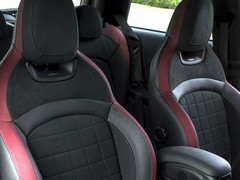 Front seats great - unless you're in the back

Those chassis revisions have done nothing short of transform the ragged on-the-limit behaviour of old JCWs. With the optional (£240) adaptive dampers the car feels superb on the most evil, poorly surfaced B-roads, coping fantastically with the bumps, yumps, camber changes and broken surfaces that would ruin the old car's composure.

Most impressive is the phenomenal traction, aided here by the larger (and again optional) 18-inch wheels and tyres. The brakes are astonishing too and overall the whole JCW experience has evolved into something that feels more grown-up and sophisticated. Especially as Sport mode allows the dampers to be softened off to eliminate any chance of the old car's unpleasant pogoing effect.

Push harder and the Mini is still agile and adjustable and as willing as ever to pivot around the driver's hips when you lift off. But even that can't quite make us love the JCW - not as an automatic anyway.

But will the manual JCW be better than the Ford Fiesta ST or the Peugeot 208 GTI 30th? Only time will tell. It didn't help the heavily specced cars we drove all cost £30,000-plus, pushing it right into Golf R territory. But it's promising we're left itching to drive the manual. Right now the fastest Mini ever is shaping up to be one of the best.