If the seemingly watered-down

was just a teaser then the new S, thanks to a 7min 49second

, appears to be the real deal. No rear seats, bespoke suspension components and a highly-tuned Nurburgring chassis setting for the adaptive dampers should silence the 'marketing special' accusations. Headlines and bragging rights are the by-product of this car's raison d'etre; breaking the front-wheel drive production car record at the Nordschleife demands more than just a sticker kit and a plaque on the centre console. 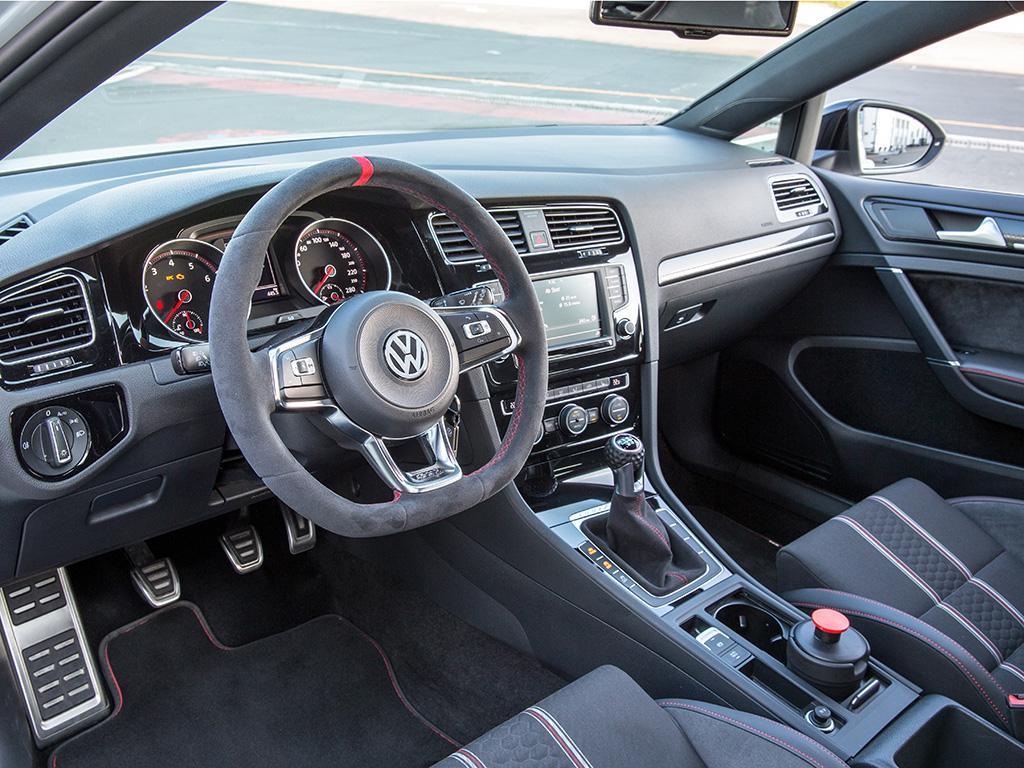 That the Golf - devoid of the

- seemingly stole the record from right under their noses is both very impressive and quite unexpected. The full development story is too long to tell here, but ultimately culminated in a repeatable lap time, with a car that only differed from the model you can buy with a roll cage (bolted to the floor alone) and harnesses - the weight gain compensated for by a slightly lighter fuel load.

But what's it like to drive around the 'ring? I'm here just a week after the N24 race and half expecting it to be the morning-after-the-night-before; all sticky floors and the whiff of stale beer and urine. But this is Germany, and the car park at Brunnchen is spotlessly clean. Only the stencils in the grass tell of the elaborate shanty towns that bordered the circuit just a few days prior.

Getting a sweat on
A fleet of Clubsport Ss await, one in each of the colours offered: Tornado Red, Pure White and Deep Black Pearl Effect. Other options are non-existent, which makes it somewhat frustrating that the price is still unconfirmed, although likely to be around £35K if you want one of the 150 designated for the UK market. 400 will be built in total. 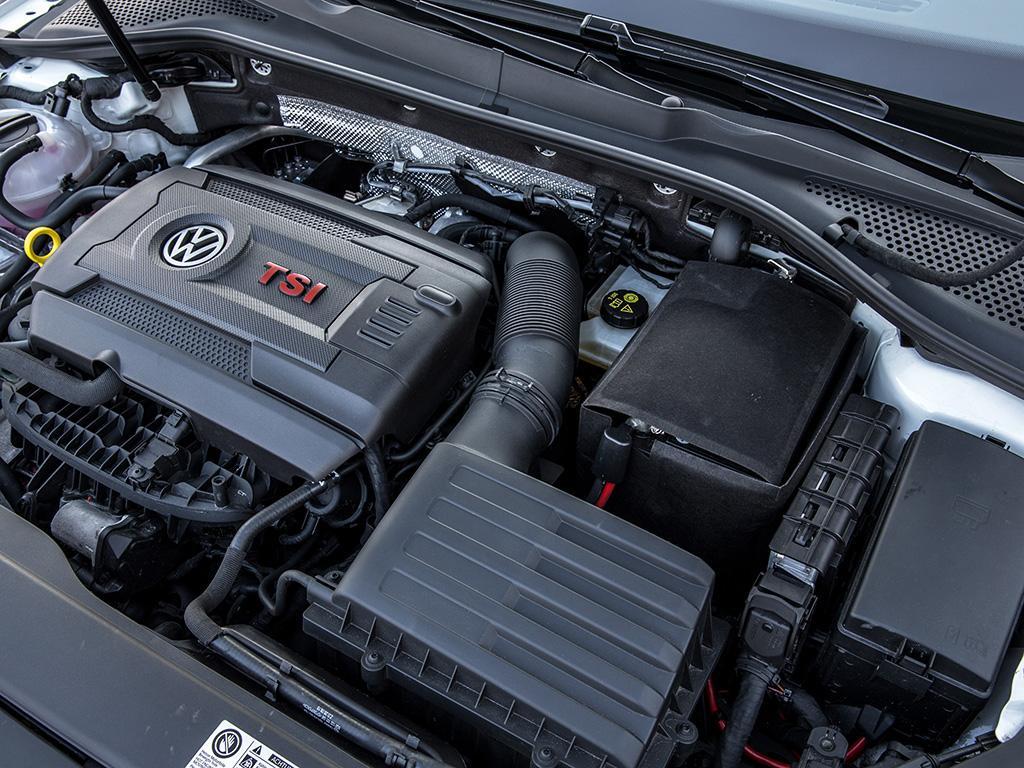 Back to the matter at hand, though, and with only four laps scheduled, there's no time to waste.  The format is through-and-off, ducks and drakes, behind Benny Leuchter - the man who actually broke the record. And who, I later learn, had never driven a lap of the 'ring until a year ago.

Pulling onto the circuit the Clubsport is virtually indistinguishable from a regular hot Golf. In other words it doesn't feel like a refugee from a racetrack at low speeds in the way that the Megane Trophy-R does. Absent is the snatching of the tyres from the diff while manoeuvring, so indeed is the pleasingly hardcore tinkle of stones peppering the wheelarches at speed.

Glance over your shoulder and there's the biggest clue to the useful 30kg weight saving. The rear seats are gone, with a sturdy strut brace and mesh cabin divider in their place. Under the carpet there's less sound deadening, too. Out of sight there's also a smaller battery and front subframe in aluminium rather than steel. Could the diet have gone further? Well, a titanium exhaust was apparently prohibitively expensive, and Michelin doesn't make a 235-section tyre to fit the 18-inch versions of the forged Pretoria wheels. As an interesting aside, the Pilot Sport Cup 2s fitted to the Clubsport S are exactly the same - right down to the NO designation - as those on the 997.II GT3. In fact, it was originally to the Golf's spec, but just happened to work really well on the Porsche. Oh, and allegedly the rubber compound is as you'd have found at Le Mans a few years ago... 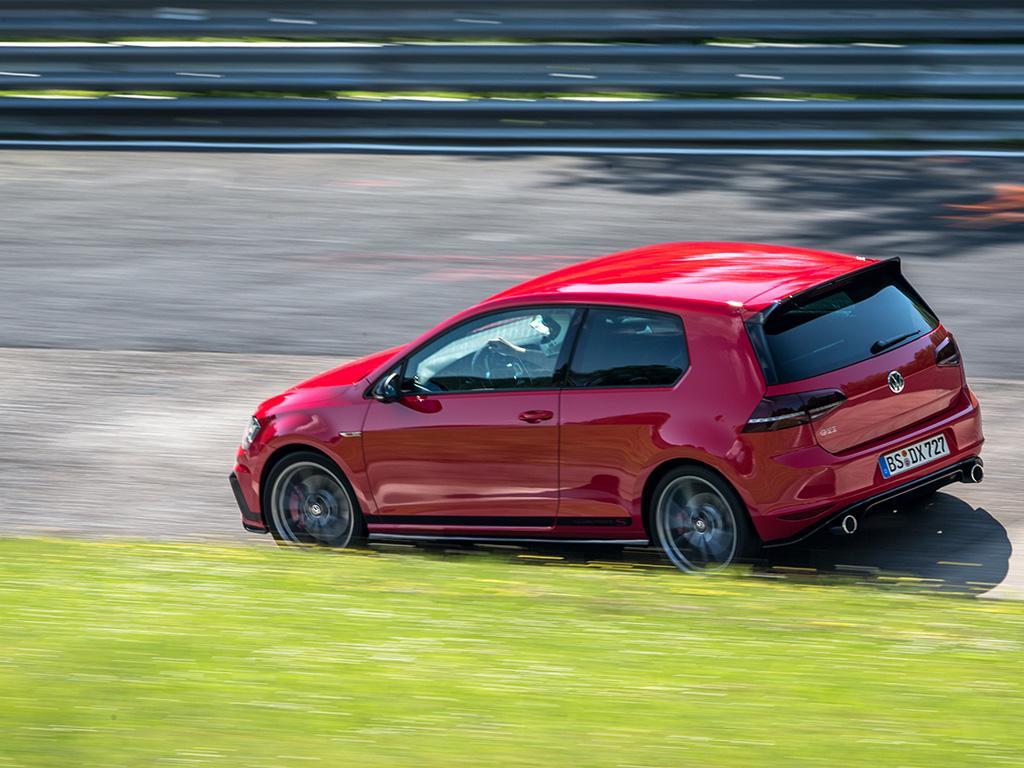 So, eyes front and, save for the Alcantara-clad wheel and numbered plaque on the centre console, there are few clues that you're in anything other than a boggo

. In other words it's a - cliche alert - very nice place to be. Unless it's 22 degrees outside and you get in the red car; the only one without air-con. Which, of course, also means it's the fastest car here, as the desire to maintain a dry T-shirt will add around 20kg to the (unladen) 1,285kg weight and sap the engine's performance a fraction. Not that you'd notice, so strong is the powerplant. Credit the extra - and permanently available - 45hp, along with 280lb ft of torque from just 1,850rpm right through to 5,700rpm.

Talking to Karsten Schebsdat before heading out, he explains the philosophy behind the GTI models. "We want the car to respond like a good friend," he says. It must be honest and dependable, and in more technical language, linear in response, stable at speed but with high agility and steering precision. Ultimately even driving gods like Leuchter are looking for a car that responds predictably. Confidence breeds speed, whatever the ability of the driver, is Schebsdat's assertion.

Short of giving you a big smile and a bear hug, you couldn't ask for a more approachable, forgiving car in which to - for instance - reacquaint yourself with the 'ring after a six-year absence. Good thing too, since Benny is not hanging around and I'm already having to step outside my comfort zone to maintain my position in the train. 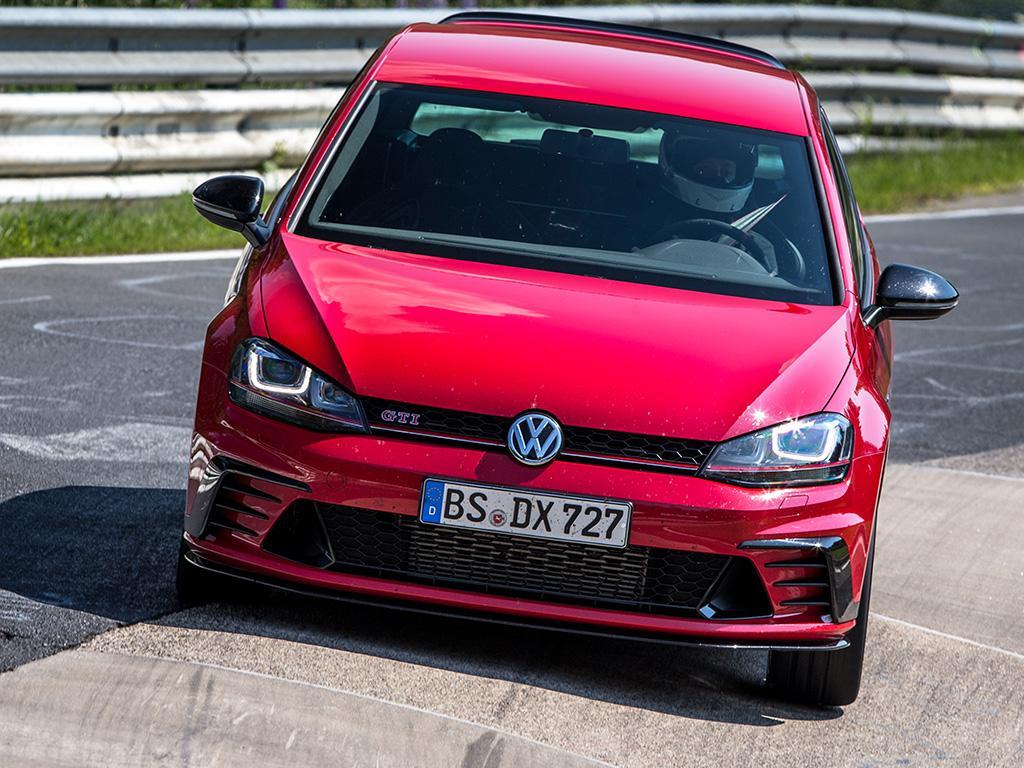 Lateral grip a huge step on from other fast Golfs

It soon becomes clear the Clubsport S is on my side. Despite the variable ratio rack, the steering feels entirely natural, loading up helpfully as the cornering forces build but never seemingly requiring more than a 90-degree sweep even through tighter corners like Wehrseifen. There is little in the way of torque steer, and its behaviour through bumpy turns on a planted throttle is particularly impressive. Schebsdat puts this down to careful design of the steering geometry, the response of the VAQ 'diff' and the reaction of the electric power steering system when it detects certain situation where torque steer is likely. Apparently such mild-mannered behaviour would not be achievable with a mechanical LSD.

Likewise the other controls which, although unchanged from the regular Clubsport, gel together faultlessly when hustled along. The pedals are well-placed for heel and toe and the classic golf-ball topped gear lever slots around the gate with a light yet pleasingly precise action. Every new ratio is accompanied by a wonderful bang from the exhaust as well, even if the reduced sound deadening doesn't quite allow it to permeate the cabin as much as I'd like. In the Megane Trophy-R you will jump out of your seat the first time you lift off, but the Golf is - surprise, surprise - more muted and civilised.

Benny ramps up the pace, but through Quiddlebacher Hohe, Flugplatz and over the rise into Schwedenkreuz the aero work becomes apparent. A new front splitter and rear wing has transformed 60kg of high-speed lift into downforce of 7kg front/17kg rear of downforce. 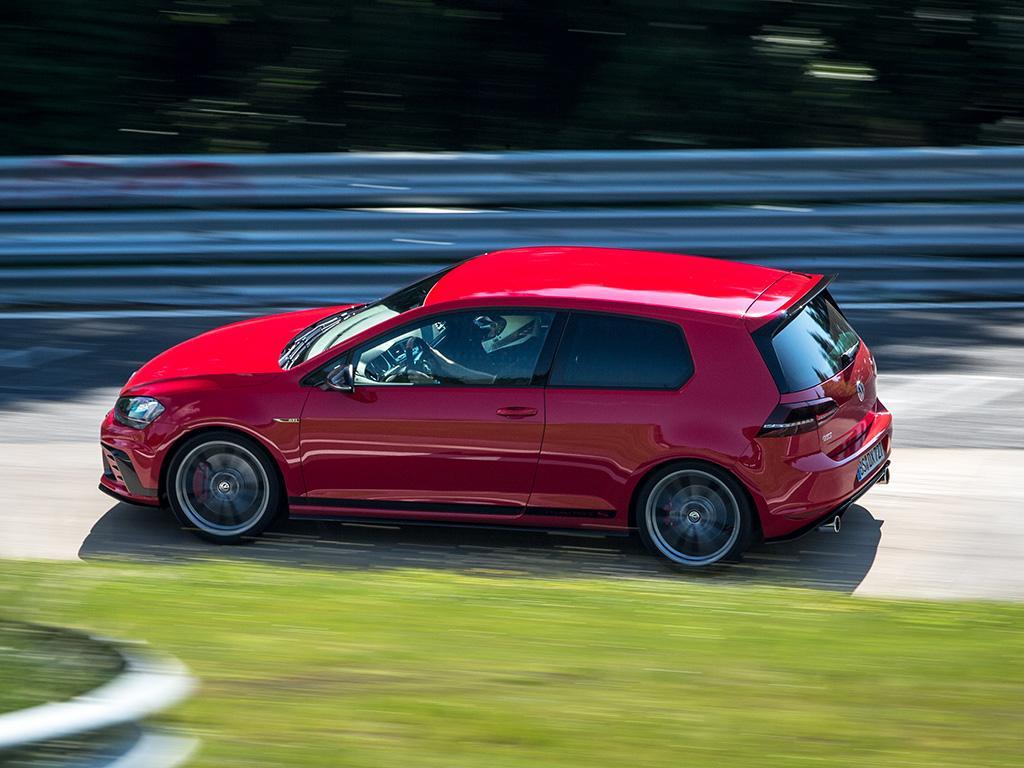 On the way into corners, even with fast, bumpy approaches, the Clubsport S remains exceptionally composed. Evidence of the comprehensive chassis tuning involved, including more consistent toe response under braking. There is movement at the back end, but nothing like you would experience in the twist-beam equipped Megane or Civic.

The brakes - upgraded on the S with thicker discs on aluminium bells (saving 1kg of unsprung weight) and a different pad material - are feelsome and entirely up to the job. Certainly on two-lap sessions of the 'ring at least. On the question of pinching the Brembos fitted to the SEAT, Schebsdat, with a shrug of the shoulders, replies they never felt there was a need.

The S will turn in keenly too, those Cup 2s finding greater purchase thanks to the additional negative camber on the front wheels. To achieve this, bespoke aluminium hub knuckles have been machined. No mean feat for a volume manufacturer, considering only around 1,000 pieces (400 per side plus spares) were to be produced. In the end, the machinists had to come in over a weekend to get the job done.

From the apex the VAQ front axle lets you plant the throttle and the Clubsport S will find traction and pull you onto a tighter line. It's a more subtle response than you'll experience in the Megane, but I sense that's a good thing on the uneven Tarmac and camber changes of the 'ring. Further proof of the Clubsport's amicable nature at work. 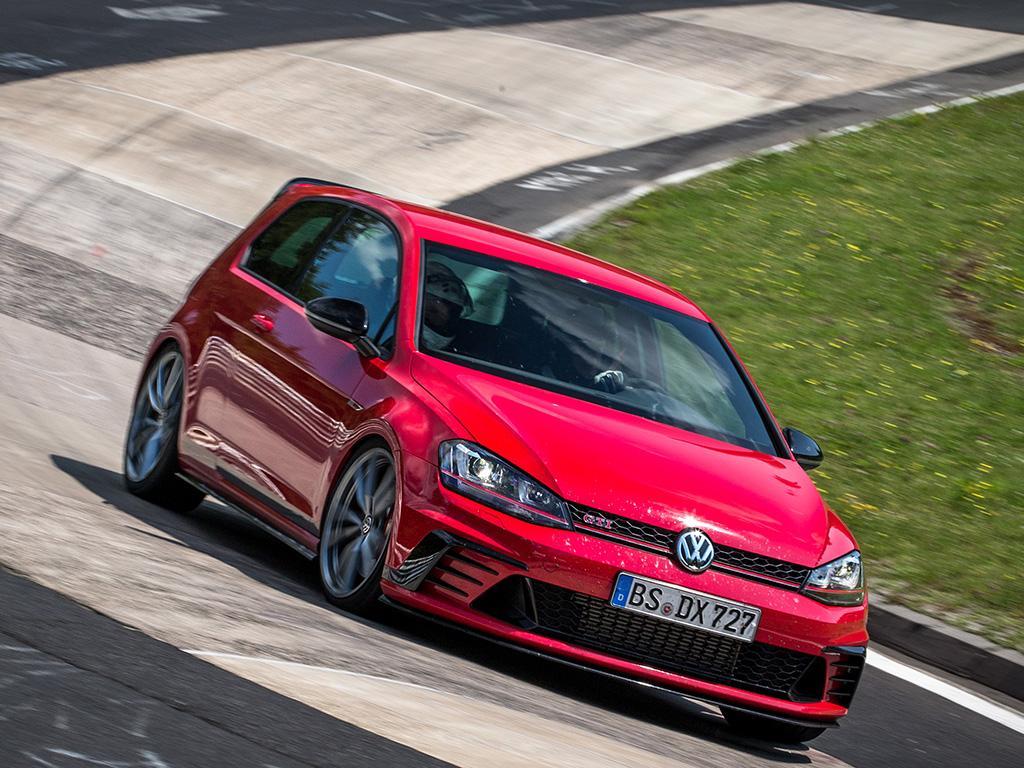 The 150 UK buyers are in for a real treat

It's perhaps over those bumps, kerbs and general imperfect surfaces that the Clubsport S feels so impressive. Sitting close to the Comfort setting on a regular Clubsport, but with much greater lateral body control, the Nurburgring DCC setting delivers a softness to the ride and a fluidity to the damping that's mighty on home turf, and, I suspect, probably rather well suited to our own B-roads.

Up front, Benny thumps across the kerbs, kicking up plumes of dust, hops out of the Mini Karussell and generally straightens out the curves as much as possible. I follow, to a lesser extent, and the Clubsport S just takes it all in its stride, settling quickly so there is never a heart-stopping delay before the next steering response.

If ever there was a place where you needed a good friend and a co-pilot you could put absolute faith in, it's the Nordschleife. And the Clubsport S fills those shoes perfectly, never becoming unsettled, despite my ham-fisted inputs and wayward lines. Sure, it doesn't provide the same sheer thrills and outright drama that you'll enjoy behind the wheel of the Megane or Civic. But there are enough glimpses of magic, enough bespoke components and outright chassis talent to ensure it feels like a special car to drive. It might not be as unhinged as the competition, but we have to applaud Volkswagen for building something so focused and out of character. And we also have a duty to use it properly, and prove Schebsdat wrong when he estimates only 50 out of the 400 will ever be used on track. Over to you, then.

Watch the onboard lap