"The best bike to emerge from Japan in years" says PH2's Jon Urry; here's why 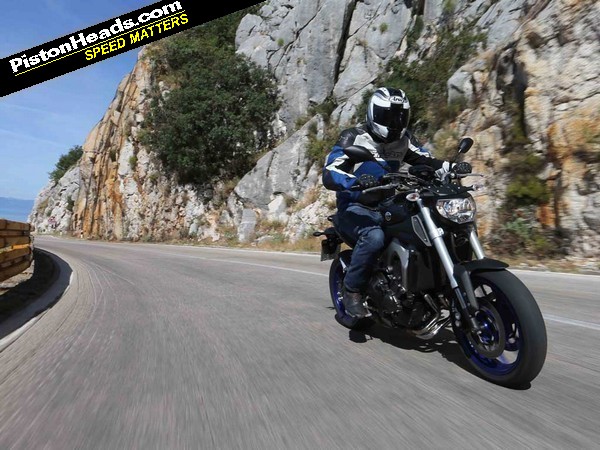 It's hard to remember the last time a new Yamaha product has provoked such excitement. In fact, it is hard to remember anything since the 2009 'cross-plane crank' R1 that was much more than a facelift or re-hash of an existing product, aside from the Super Tenere of course. Well if the MT-09 is anything to go by, Yamaha is a sleeping giant that has now woken up and chugged back its morning espresso. 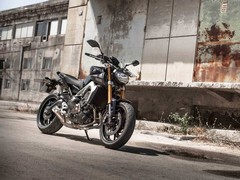 (although to be fair Yamaha had a few triples such as the 1976 XS750 and 1980 XS850), the MT-09 uses a brand new 847cc triple motor that produces a claimed 115hp with 64lb ft of torque. While marketing brochures will speak of 'cross-plane' power (the motor is called the CP3), the truth of the matter is that with a 120-degree crank the engine naturally has an uneven firing order and is essentially the same configuration as the Street Triple. Albeit bigger in capacity.

Naturally the motor comes with the usual variable drive modes and ride-by-wire technology, however the MT-09 also gains a brand new die-cast chassis, sporty wheels in 120/70 and 180/55 size and suspension with preload and rebound adjustment. Impressively, Yamaha claims the bike weighs 171kg dry, 188kg wet, and has a potential lean angle of 51 degrees. Which is the same dangle angle as the R6. But that's not the best part. The MT-09 is priced at £6,799 - considering Yamaha's recent reputation for sky-high prices that represents incredible value for money, even more so when you discover just how good the bike is. 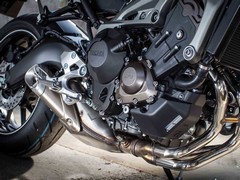 Dark on the inside, fun on the outside

Yamaha has been very keen to stress the MT-09 represents the 'dark side' of Japan and has its own character and soul while still incorporating all the quality and reliability that you expect. I don't really care what the bike represents, because after just a few short miles you will be blown away. To me the MT-09 represents the best bike to emerge from Japan in years - it is, quite simply, brilliant. And yes, brilliant as in Street Triple brilliant. Possibly even better.

The riding position is traditional naked bike with wide bars and low (slightly more so than usual) pegs, It's all pretty standard. Then you fire it up with the funky new switchgear and the triple barks into life. Let out the light clutch and you are away, although at this point caution is required. 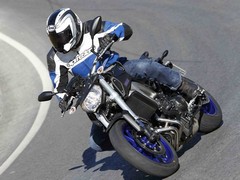 Get hasty with the throttle in first and the Yamaha rears up. It's not intimidating, but if you weren't aware of the torque characteristics of a triple before then you certainly will be now. Into second and the MT is still pulling strongly. Compared to the Street Triple the Yamaha engine is slightly smoother, however it is considerably more powerful and is best thought of as a mix of the Street and Speed Triple - although with a far better gearbox. Flick the clutch in second and the Yamaha will set off on its back wheel with the wonderful throttle response allowing you to balance it through the rev range and then snick third. If you are brave (or more talented than me) fourth is an option at this point, however so is a lengthy licence ban so it is best to get the front down and enjoy the chassis' agility.

Trip(le) the light fantastic
With the triple merrily holding the revs the MT-09 can be thrown into corners with the kind of agility usually only seen on the Triumph. This is no harsh Fazer or portly Speed Triple, the MT-09 is light, nimble and blessed with very good handling. I'm not convinced the suspension is quite as refined as the Triumph's units and doesn't feel quite as plush but I'm sure a bit of fiddling could reduce the brittle edge. 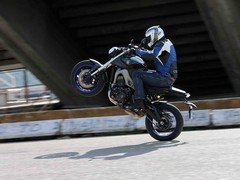 Exiting bends the initial throttle response can feel a little harsh and almost as if the chain is slack (it wasn't), however, putting the bike in 'B' mode calms this feeling down if it really bothers you. To be honest I wasn't overly distressed by it and Yamaha say this bike is aimed at more experienced riders anyway. The brakes are excellent and although the bikes we tested were non-ABS models, an ABS version will arrive in the UK after the standard one with pricing and on-sale date TBC.

The X-Factor
It is hard to say what makes the Street Triple so good, it's just a wonderful blend of handling, performance and character that makes you smile every ride. Well the MT-09 has all this and even more. I can't remember the last time a Japanese bike made me grin so much, laugh out loud and thoroughly enjoy the riding experience. Having seen Yamaha go through some tough times of late and reveal a lacklustre line up year after year, I am overjoyed that eventually it has something worth shouting about. 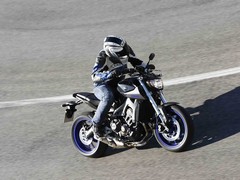 Agile and chuckable, the MT-09 is pure joy

The MT-09's styling may not be to everyone's tastes (in the flesh it looks a lot better), but the build quality and X-Factor is there in abundance and it's replaced the Street Triple as my favourite bike currently for sale. I'm genuinely impressed that Yamaha has made such an excellent machine and then priced it so competitively. It deserves to sell by the shed load.

Every Yamaha dealer will have a demo MT-09 by the end of September or start of October, I strongly urge you to pop down for a test ride, although don't blame me if you end up riding one home!