Not convinced by the updated BMW M5? Good - the alternatives are brilliant

Two significant things happened to the BMW M550i xDrive in 2020: the first was that it was made available in the UK; the second was that along with the rest of the 5 Series range, it went through one of BMW’s Life Cycle Impulses – known to everybody else as a facelift.

Sweeping across the upper edge of each headlamp unit you’ll now see a crisp blue stripe, like Boy George’s eyeliner. Or maybe they’re more like those almost-but-not-quite-concealed blue blinkers that unarmed police cars have wedged into their grilles and headlights. Every single time you catch a glimpse of the M550i in your rear view mirror your stomach does a somersault and your heart skips a beat. This 530hp four-door looks so like an undercover cop car – those thin blue accents, its very stern expression, the ultra-discreet body colour – that even now, when I see a photograph of it on my phone, I think I’m about to be pulled over.

That also means it looks a lot like a getaway car. I like that paradox. Plain clothes police detectives and career criminals might be sworn enemies, but on the subject of motor vehicles they must surely sing from the same rap sheet. Whether the M550i is better suited to escaping the law or enforcing I sadly don’t know, but there can’t be any other vehicle on sale today that’s better suited to those two tasks. 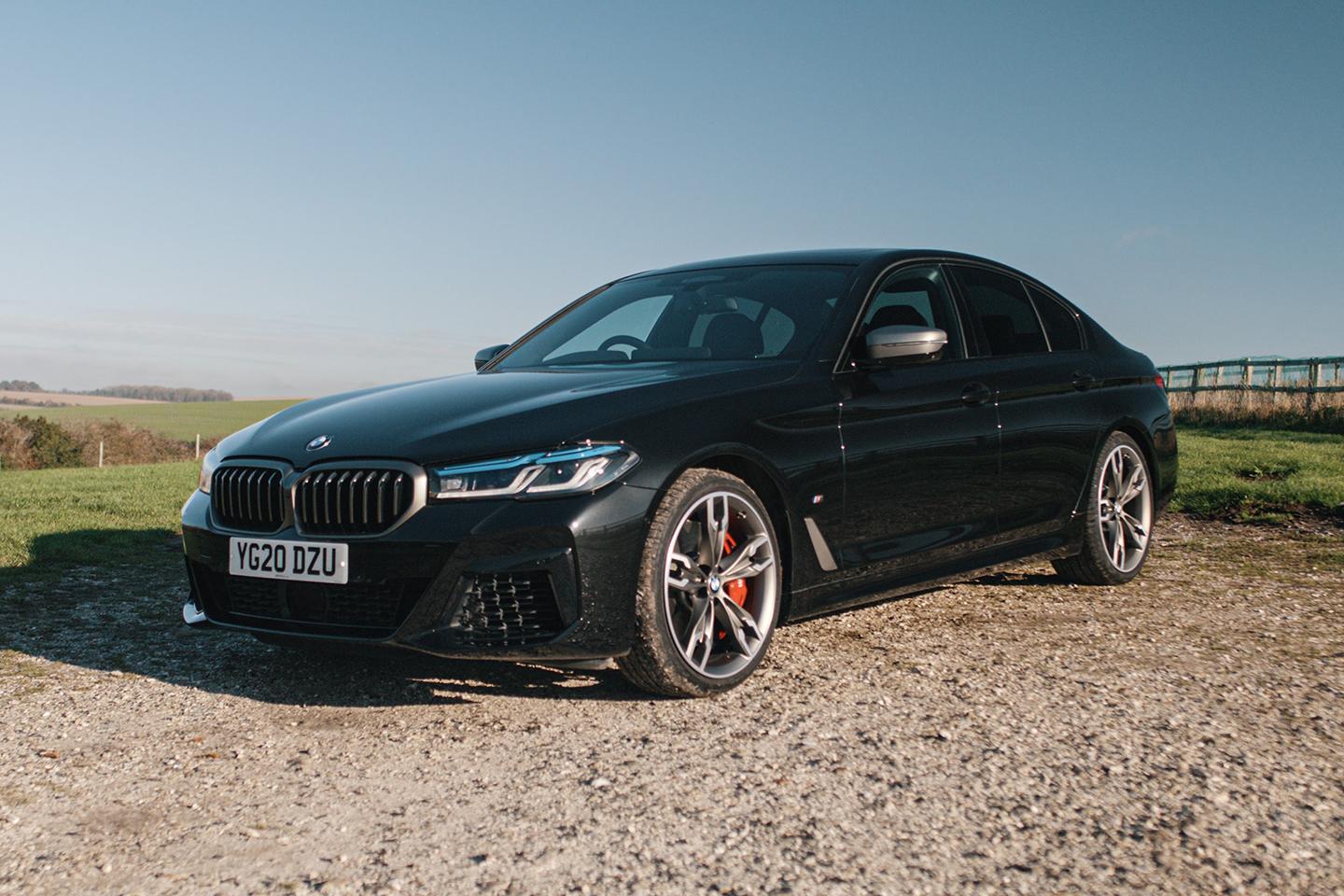 In a sense, the M550i xDrive is BMW ‘doing an Alpina’. It’s far subtler to look at than the full-fat M5 and not so concerned with being lancet-sharp to drive. That means its long-distance and everyday refinement needn’t be compromised by firm suspension or aggressive steering response. It understands that it doesn’t need to be especially good to drive on circuit, so it doesn’t even try. That all sounds very Alpina-ish, does’t it?

The Buchloe-based company has been doing exactly that for five decades now – producing discreet, well-rounded alternatives to the M-division’s relatively highly-strung own-brand stuff. After driving both the M550i xDrive and the Alpina B5 BiTurbo – both supremely luxurious and comfortable rocket sleds with thundering performance and as much agility and precision as you could ever need from this sort of machine – I’m left wondering why you’d ever want the M5. I can’t see how a little less comfort, a fraction more speed and a pinch of added handling response would improve the overall driving or ownership experience one jot.

Give yourself a pat on the back if you’ve already spotted that the M550i we have here is a post-facelift 5 Series (those blue headlight accents are the giveaway), while the B5 is based upon an earlier 5. Alpina has recently launched its updated B5, but that car hasn’t yet made it to the UK. This actually works in our favour because for the £67,595 you’d have to spend on the BMW, you could instead have a two-year old Alpina. Actually, looking at the PH classifieds I reckon you could save yourself £5000 or so by choosing the B5, and that’s before you’ve ticked a single box on the M550i’s options list.

The two cars do of course share a great deal in common. Indeed, this B5 is based upon a pre-facelift M550i, meaning it too has a 4.4-litre V8 with turbochargers, plus an eight-speed automatic gearbox and rear-biased four-wheel drive. The two begin to deviate when you delve into the specifics, or more precisely when you look closely at what Alpina has actually done to its own car. Power, for one thing. The B5 gets bigger turbos and a bespoke, more robust cooling system. There are also custom lower wishbones at the front for more negative camber, plus completely new spring and damper rates.

One deviation I like very much is the Alpina’s unique Comfort+ mode. It winds the adaptive dampers so far back you sometimes wonder if they’re still in there at all and haven’t simply dropped off. That’s great for the car’s ride quality in town and on the motorway, but use that mode when bounding along a three-dimensional B-road and your head will rock and stomach churn. That’s when you flick back to the plain old Comfort mode.

I don’t think I’d ever specify those immediately recognisable Alpina decals on my own B5 – they give too much of the game away. The slightly fussy front bumper and that emblem just above the splitter make it more obvious than I’d like that some fearsome V8 lump lurks beneath the car’s long bonnet as well. But that’s just me. Paradoxically, the M550i makes much aural more noise than the more powerful B5, whose eight-cylinder rumble is of the distant sort, like thunder above the neighbouring village.

So which is it to be? You’ll have to watch the video to find out, but it was a very close call. Did I for one moment while driving the M550i xDrive or B5 BiTurbo find myself wishing for more support at each corner, tauter body control, faster gearshifts, more outright grip, stronger brakes, more supportive seats and a louder soundtrack? Never. And now I wonder what the BMW M5 is even for.