The two best Audis of the 2000s, together on one deserted road - of course we had to video it

Millenia from now, archaeologists will dig in the dirt with little trowels and brushes, slowly unearthing cars that haven't been exposed to the sun's rays for thousands of years. They may even be fossilised. One day, wearing shorts with large pockets, one of our excavators will sweep aside a little mound of dust to reveal four interlinked rings.

"Aha," they'll say enthusiastically. "Now this is very interesting. What we have here is the front end of what the New Elizabethan people, who lived around 2000 A.D., would have called a 'car'. This one originated from southern Germany, I would say around the Ingolstadt area. It probably made its way to Britain very early in its life before being abandoned here much later."

They would dig a little more, revealing before too long a rectangular sheet of plastic, its curious inscription still just about legible. "Well now, this really is fascinating," they would go on to say. "Do you see this marking here? A zero followed by a five. It means this car was built before the year 2006. Now that's significant. It tells me this car was most likely abandoned by its owner because of something called 'understeer'."

What I'm getting at here, is that within months of the B7 RS4 (the second-generation model) going into production in 2006, Audi unveiled the showroom-ready R8 at that year's Paris motor show. There must have been a buzz in the corridors of Audi's Ingolstadt headquarters - and even more so 100 miles to the west in Neckarsulm, where the company's high-performance models are built - for in quick succession, the marque had produced its two finest ever driver's cars. Everybody on Audi's payroll would have known it. 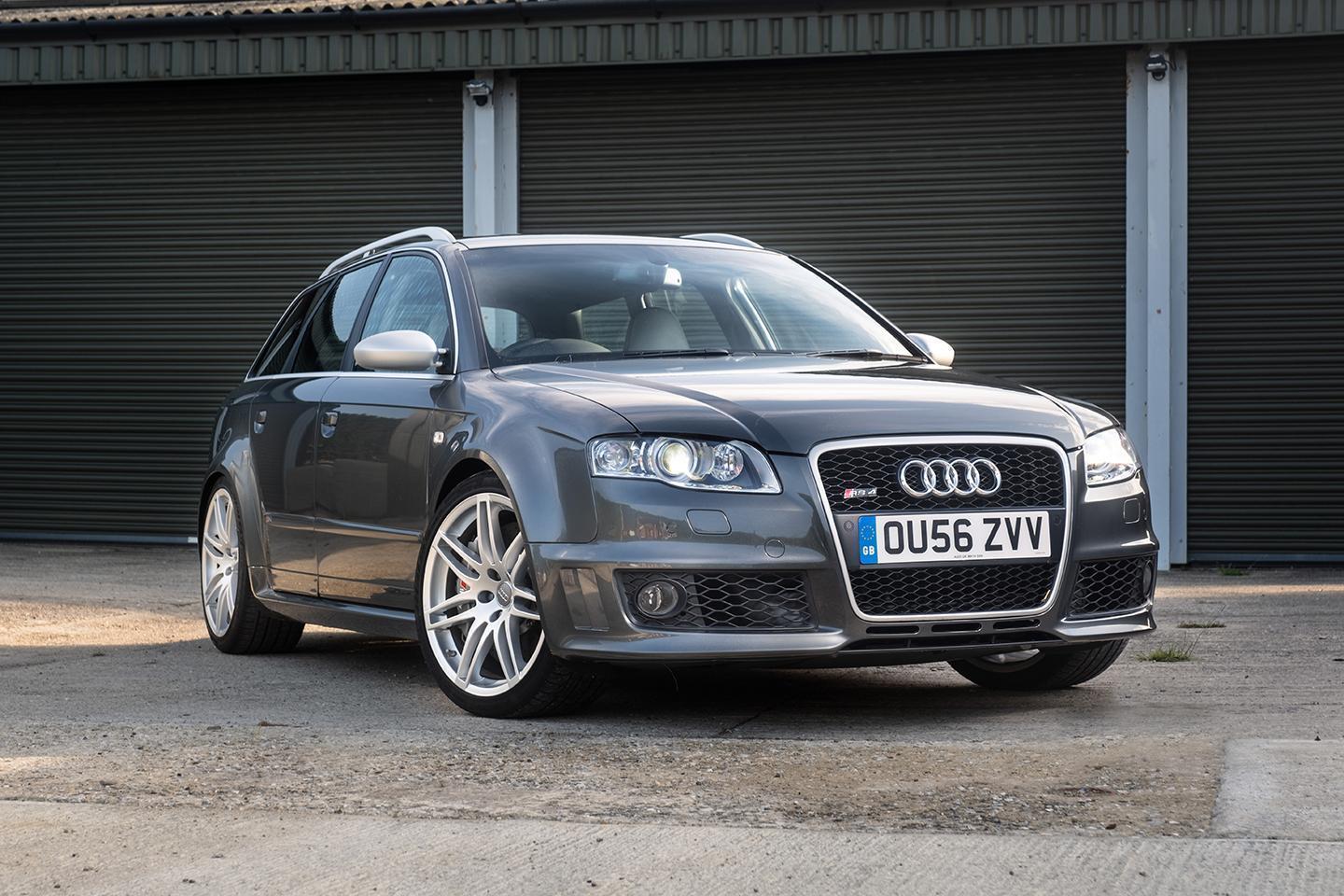 Before the RS4 and R8, fast Audis tended to have a very particular feel - a defiantly nose-led balance, numb steering and no real adjustability, but acres of stability and wet-weather security. That was their MO. But Audi knew its cars could be so much more than that, and in 2006 it proved as much; the RS4 was a better-balanced and more engaging machine than any RS Audi before it, while the mid-engined R8 was so exquisite to drive, many car magazines placed it ahead of the once peerless Porsche 911 in comparison tests.

I have driven both the RS4 and R8 before, but never back-to-back like I did last month. Early in the morning on roads I know well in south Wales, I jumped from one to the other and wondered what made them so different to earlier Audis, and what they had in common.

You'd swear their steering wheels had somehow been mixed up; one is small, grippy and a pleasure to hold, while the other is bigger in diameter, its rim very thin and the leather polished to such a high shine there's barely any friction between it and your fingers. The latter belongs to the R8, and it means you drive with some caution to begin with, worried it might slip from your grasp at the least opportune moment.

Meanwhile, the RS4's wheel makes you feel in command of the car right away. It's essentially the same as the one you would find in a Lamborghini Gallardo - the right size with very prominent thumb grooves, wrapped in perforated leather that your hands seem to stick to. Steering wheels aside, you address the two cars exactly how you'd expect: sitting upright in the RS4 with your feet pressing down onto the pedals, but reclined in the R8 with your feet moving forwards onto the clutch, brake and accelerator.

What they unequivocally have in common, of course, is an engine. Both use the same 4.2-litre V8 that produces 420hp and 317lb ft of torque, revving spiritedly to 8,250rpm as it does so. It's a naturally aspirated, all-alloy unit that never thumps you very hard in the back, but instead pulls ever more urgently as you allow the revs to build and build. In the R8, though, the engine uses a dry sump for better lubrication on track and so it can be mounted lower in the car's body.

It isn't like the animalistic V12 in a Ferrari, so loud and ferocious that it dominates the entire driving experience. In both RS4 and R8, it's far more measured than that, never overshadowing every other part of the car. But this is one of the great modern performance car engines nevertheless. It begs to be wrung out, its soul seeming to soar as you let it spin all the way to the redline. The soundtrack in either installation is just right, a distinctive, high-revving V8 yowl but without the sheer volume and the silly exhaust augmentations we hear so often nowadays. It's just an honest and tuneful eight-cylinder soundtrack.

The unit is relatively torque-light for a V8 and it won't pull a tall gear from low engine speeds with the effortlessness of a modern turbo engine. But that's a big part of its charm. Get down the gears, let it run out all the way and I swear you'll never crave anymore outright performance. For road use at least, both cars are plenty accelerative enough.

Both have good manual gearshifts, too, but the R8's, with its Ferrari-style open gate, is far more satisfying to use. The light click-clacking sound the lever makes as it brushes against the aluminium fingers is as much a part of the experience as the exhaust note.

But what Audi got so right with these cars was their chassis balance. Mechanically they could scarcely be more different, but there is a common gene deep down that makes both behave through corners in what would have seemed like a very un-Audi-like way in 2006. And that's despite the RS4 positioning its V8 mostly ahead of its front axle line, where you'd expect it to make the car plough on in bends the way Audis had tended to for so long.

Push hard enough and that does eventually happen, but at just shy of the limit you can drive the RS4 with enthusiasm and commitment along a twisting country road, trusting the front end to tuck sharply into an apex and feeling the back end rotate willingly around behind it. Under power in the wet you can even feel the car drive away from a corner with real poise and positivity (thanks to a nominal 40:60 torque split for the four-wheel-drive system, which can send even more torque rewards in certain conditions).

This isn't about wild oversteer or big slides. It's far more to do with athleticism in corners, of the sort that makes driving not prescriptive, unrewarding or even frustrating, but fun. It's the difference between a car that makes getting up a 4am to drive on deserted hillside roads worth it, and one that makes you choose your bed instead.

So much has been said and written about how engaging the R8 is to drive. It steers crisply, its ride is supple and composed but body control is good, and like the RS4, there's real balance in the chassis whether you're hurling it into a bend or unleashing the V8 on the way out.

It is that set of characteristics that makes both of these cars far better to drive with any enthusiasm than the Audis that came before. Post-2006 there have, of course, been leaden-footed fast Audis that reverted to understeering type, but so too have there been better balanced and more sporting cars. The outgoing RS3, all versions of the R8 and the latest RS6 all owe much more to the V8-powered duo that arrived 15 years ago than they do the one-dimensional fast Audis of earlier times.

And that's why future generations will categorise all high-performance Audis thus: those that pre-dated the 2006 renaissance, and those that came joyfully after.