The new BMW M3 is very good indeed - but is it the best sports saloon you can buy?

These things are subjective, but I suspect most would agree the Alfa Romeo Giulia Quadrifoglio looks better than the new BMW M3 Competition. The Italian car just doesn't try so hard. But while the Alfa is a prettier and more cohesive thing to behold, the German car has far and away the better cabin. It genuinely feels twice as expensive inside with much higher-grade materials, better switchgear, a far superior infotainment system and much more convincing levels of fit and finish.

Let's call it scores even. That's good because it means we can judge this encounter not on relatively unimportant things like design and cabin quality, but on the stuff that should really matter: engine character, steering precision, handling balance and so on. In those more substantive regards, these two cars are much less alike than you would believe.

On paper, though, the similarities are striking. The BMW organises its six cylinders in a row whereas the Alfa Romeo files them into two banks, but they produce the same 510hp using two turbochargers apiece. Both drive their rear axles (though there will soon be a four-wheel drive M3) via eight-speed automatic gearboxes, too. That's a real departure for the M3. UK buyers will only be offered the higher-powered Competition model, which means the basic M3, available elsewhere with a manual transmission, won't find its way here. But while we mourn the loss of a manual, will we also regret the lack of a snappier dual-clutch transmission?

Where these two machines really diverge is weight. The BMW is the thick end of 200kg heavier than the Alfa, which is an almighty handicap. It's like Lewis Hamilton having to race this season with Nelly the Elephant being piped into his helmet in an effort the level the playing field. The M3 tips the scales at 1,800kg, demonstrating how hurriedly a modern car can put on weight if it's not subject to a costly and ruthless kilo-cutting regime. 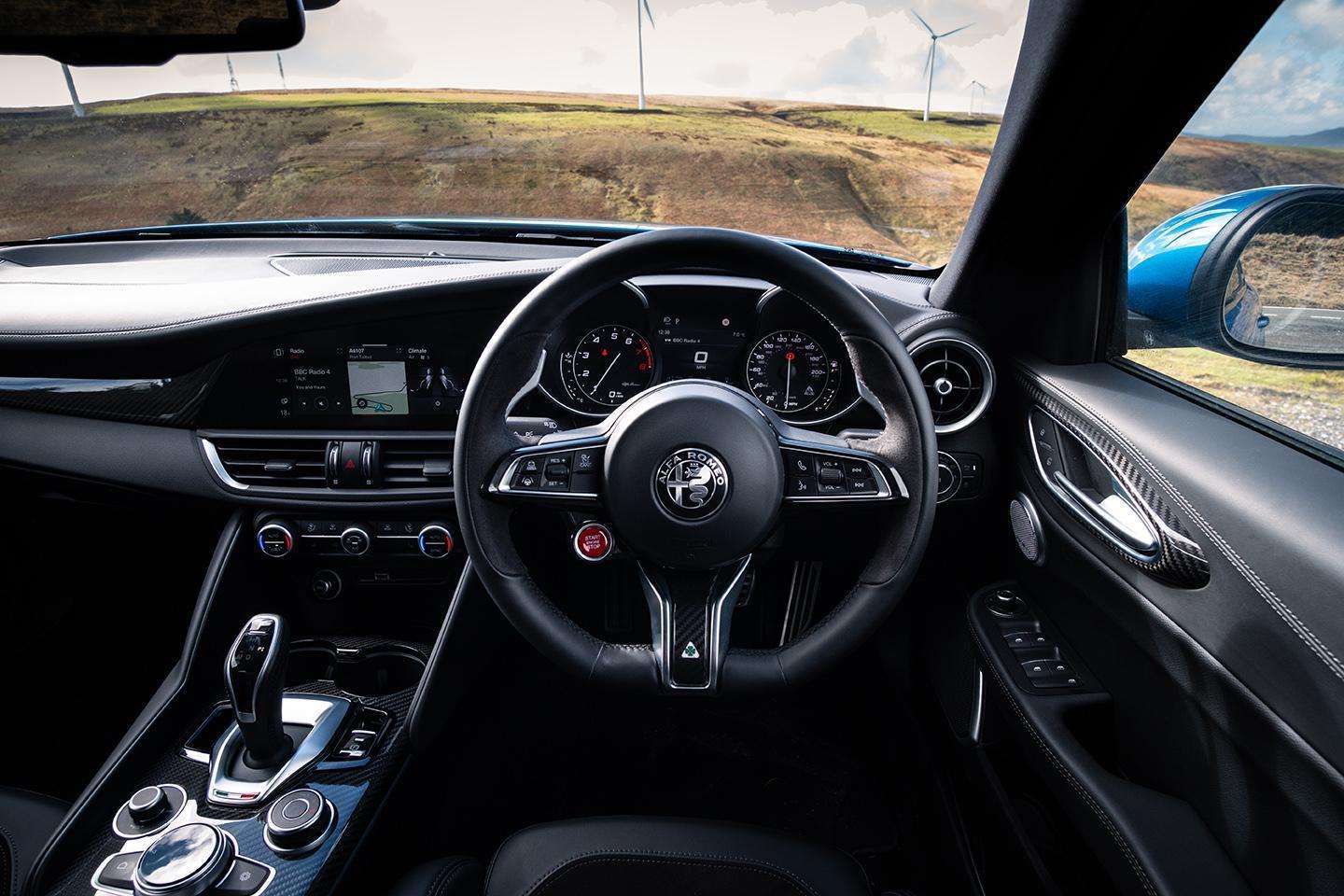 The Giulia Quadrifoglio has been around for a few years now. While a mid-life facelift last year did bring welcome improvements to parts of the cabin and the infotainment system, it is now beginning to feel its years. I have a sense that some of the suspension's trademark suppleness has been eroded post-facelift, but it's a marginal thing and not enough to make this car anything other than the most composed and fluid sports saloon there is. In Dynamic mode you can knock the dampers back a level, which permits the suspension to absorb lumps and bumps in the road surface rather than thump them through to the body. Ride comfort in normal driving is very good indeed, but it's the way the chassis deals with a poor road surface that's really impressive.

Early Giulia Quadrifoglios had hyper-alert steering that almost felt too incisive, at least until you grew accustomed to the exaggerated rate of response. This much later car is more measured in the way it responds to steering inputs and how it darts into an apex, meaning you trust its front axle right away. On Pirelli P Zero Corsa tyres there was very strong cornering grip and traction in the dry, although the tyres could be easily overwhelmed by all the engine torque being dumped through them on damp patches. It's just enough to keep you focused.

Calling this a light car is clearly a stretch. You are aware in the way it blends pliancy over bumps with tight-fisted body control, however, that the chassis isn't having to exert itself to cope with the forces at play. The Giulia Quadrifoglio has always had one of the best sports saloon chassis in the business - that isn't about to change.

Its 2.9-litre V6 is zippy and energetic, and it even manages to sound much more tuneful than the typical modern turbo engine. It's no howling Alfa V6 of days gone by, but nor is it a mute. Impressively, the two rear contact patches put its 443lb ft of torque down to the road with minimal fuss, at least in the dry, meaning you rarely find yourself with your right foot wavering over the throttle pedal, unsure if you're about to send a shock through the entire car. Meanwhile, the auto 'box is mostly very good, but it doesn't row up or down the gears with the intensity of a dual-clutch unit.

Somehow, though, the Alfa Romeo draws more character from its eight-speed auto than the M3 does from its own, despite both cars using the same ZF 8HP gearbox. Maybe it's a perception thing, but even this very good automatic never feels quite at home in an M3. Mostly it shifts gears pretty quickly, but upshifts right at the limiter are laboured. That's where you miss a dual-clutch. That sort of transmission can bring much more than just quicker shift speeds, though. With the very best ones, you can pull the left-hand paddle for a downshift whilst hard on the brakes and feel the new gear slot in, dragging at the rear of the car and stabilising it slightly. And on upshifts, you feel the near instantaneous gearchange as a bolt running through the car from nose to nail, the next gear slotted even before your fingertips have broken contact with the right-hand paddle. The point is, you can get close to matching the raw shift speeds of a dual-clutch with a torque converter, but character and tactility are another matter altogether. A Mercedes-AMG sports saloon seems to get away with an auto, but I'm not yet convinced a BMW M-car does.

And the engine? It's effective and strong, but while an M3's motor was for so long the very heart of the car, that categorically isn't the case here (though nor was it last time out). This new twin-turbo inline six is fairly responsive, but I've tried plenty of modern turbo units that are sharper, and it lacks the energy right at the top end that marks out the very best forced-induction engines of the moment. What's more, it lacks even the Alfa Romeo's faintly sonorous timbre and what sing-song there may be is evidently piped in. All told, this is comfortably the least stirring M3 powertrain there's yet been. But that woolliness permeates only so far. The M3's chassis, thanks heavens, is pure BMW M.

A hallmark of these modern-era M3s is that they simply never understeer on the road. Or if they do, it's on you. This latest one presses so much rubber into the road across its front axle that it never seems likely to let go. You choose your entry speed and just assume the car will be up to it. Its pace along a winding road is staggering as a result. Meanwhile, the steering wheel doesn't exactly chatter away in your fingertips, but the rack is pin sharp and you trust its response and the grip down at road level right away.

The previous M3 could be a frightening thing to hustle, particularly on undulating roads and especially in the wet. It would lose control of its body weight over crests, break traction when you least expected it to and even upset its own rear axle on upshifts. BMW made good improvements to it over the years, but that last M3 always had an edge. Here, it's been buffed away entirely. Traction is much more robust, those more laboured upshifts never excite the rear of the car (an upside to that auto 'box, perhaps) and body control is not just better, but absolutely superb by any measure.

It all means you drive this new M3 with so much more confidence than you did the last. For the most part it manages its weight remarkably well, too, although on really rollicking roads you're well aware of those 1800 kilos. Thing is, all that comes at a price. How do you make a heavy car feel agile, responsive and very keenly controlled? You fit very stiff springs. You feel it from the first metre onwards. Importantly, there's enough quality in the damping to cope with the demands of a bumpy road surface, but in day-to-day driving I have no doubt that very taut ride will begin to grate.

Which brings us back to the supple, composed and undemanding Alfa Romeo. Its chassis is better suited to our roads and it has the more exciting powertrain, and it's still my favourite present day sports saloon as a result. And yet, I'm aware I'll be in the minority with that view. Despite its irritatingly try-hard design, the M3 has a kind of magnetic aura about it. I feel drawn towards it. There's the fact it's an M3 for one thing, plus that brilliant interior for another. Those things aren't enough to make me want one more than I do the Alfa, but I'm certain the vast majority of people will feel otherwise.