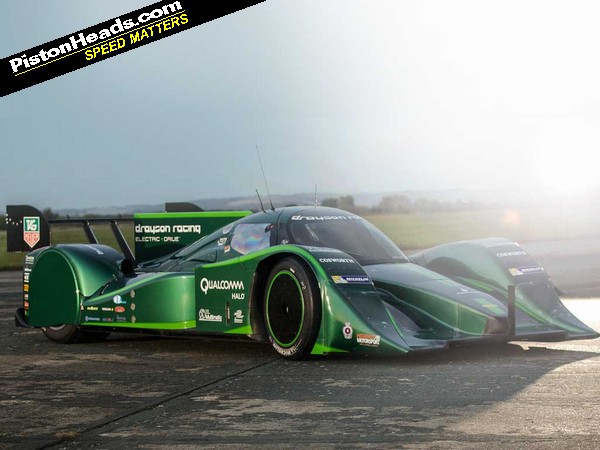 "And how much torque does it have?" This is the slightly glib foreplay that we go through before any shoot. I say glib because I'm often guilty of appearing uninterested during these exchanges - I've been told as much - when the truth is that I'm concentrating on the car and wondering how to keep Neil from imploding due to the perennial lack of shooting time. 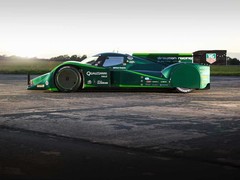 And so I was walking around the stunning

with Chief Engineer Graham Moore and asking the usual questions regarding basic specification that I could memorise for the in-car talking bit of the video. Removing the fuel tank and internal combustion engine and adding four electric motors with fuel cells rated at a potential 850hp has only added around 40kg. The power figure today is more like 800hp, which is enough to make me gawp slightly, especially given the calmness with which Moore delivers the message.

And then we come to the matter of torque. "Four thousand Newton metres", he replies with all the drama of a man asked the result of last week's Strictly. That's 2,950lb ft. 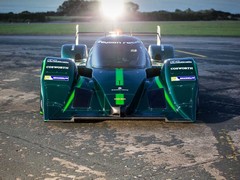 Drayson pulled apart a Lola to make it

The wind is causing a right old kerfuffle around the awning, and I don't hear too well anyway. "Ha! I thought you said 4,000Nm for a minute."

"I did." says Moore, doing a reasonable impression of Ivan Drago from Rocky IV.

I become even more unimpressive than usual. What I want to do is ask how a conventional rear axle can handle such a twisting force but the words won't form correctly because my limited cerebral capacity is completely baffled by the information. So I just walk around the back of the car muttering stuff. "Just not possible; can't be possible; that can't be done."

Eventually something vaguely cogent forms. "Does it just shred the tyres?"

"On hot slicks it's pretty incredible," says Moore. I guess we'd better drive it and find out how incredible. 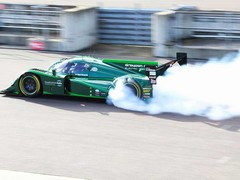 This car is one of the great automotive follies of the motoring era - and I mean that in the correct sense of the word. It's a non-commercial, scientific journey for a man who wanted to explore the unknown and was willing to underwrite the costs himself. That man is

, or Paul Drayson when you shake his hand.

The car is based on a Lola B10/60. The carbon passenger cell is unmodified, but everything rear of the bulkhead has been redesigned to accommodate the battery cells. The four axial flux Oxford YASA motors sit roughly where the gearbox would have been and are British designed and built. According to both Moore and Drayson they're the best money can buy.

So why build an electric LMP1 car? 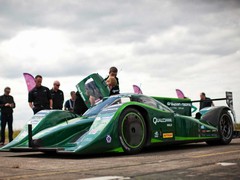 Drayson now has a new speed record of 205.1mph

Drayson is clear on his reasons, and they slightly undermine my definition of his being non-commercial. He rightly speaks with an inevitability about the emergence of electric vehicles, and he is very much focused on next year's Formula E championship in which he will be running a car. But he reserves a special grin for the series in 2015. "Next year we all have to race the same car, the following year we can develop our own; this is a perfect way to develop the technology."

So in part this is motorsport going back its roots as a development exercise. Everything learnt here will somehow impact on the way we interact with electric cars in the future and with his business head in place, Drayson sees this being a natural continuation of UK dominance in motorsport. We have the skills to be the pre-eminent makers of electric racing cars in the future, just as we are the dominant force in petrol power at the moment.

And why an LMP1 car? "Well, we already had this one, so it seemed a good idea." 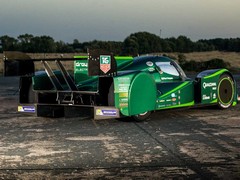 Pulling apart a beautiful Lola that you raced at Le Mans would have caused me some soul-searching but apparently not Paul. Does he miss driving the car with the petrol motor? "Not at all: once you've driven it, you'll see why", he smirks. Would he go back to Le Mans to race in a car with a 'normal' engine? "No."

My first contact with this new fusion of electricity and motor racing wasn't positive. I drove a Nissan Leaf thing at Goodwood: it was slow, dull-witted and utterly characterless. The first impression of the Drayson B12/69EV is one of rank contradiction. The car's visuals are absolutely immense: an LMP1 car is a vast thing, festooned with winglets and scoops, and for me the silent anger of the thing sitting at rest is a precursor for the moment it yelps into life.

But of course that never happens. 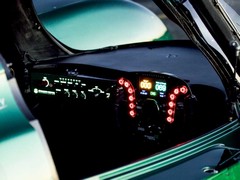 You bolt yourself in and look around the cabin for controls. Very little is familiar on the main dash, the steering wheel has settings for the traction control and is reasonably conventional, but the start procedure is quite spooky. The main switch has two positions, the first allows the car's systems to start, the second allows the thing to prime itself and move. Graham talks me through the procedure calmly - in fact I don't appreciate the serenity of the moment because there's no chuntering motor and slapping dog-box behind me, but he then says "push the high-voltage button please" - a great big red number surrounded by a protective collar just like the fire extinguisher manual release.

I hit it and a bank of lights appear above it, Graham is silent as the lap-top brains monitor what's going on and I have to say, I'm sitting there not feeling entirely comfortable. Large voltages are lurking somewhere near my testicles and their silence is malevolent.

A reasonable push on the throttle pedal sends the car creeping backwards. Then it's out onto Elvington runway to experience 4,000Nm of torque. I'm a little apprehensive. "Leave the traction control in position six for now, you're on wet tyres but you'll be surprised how much grip there is." 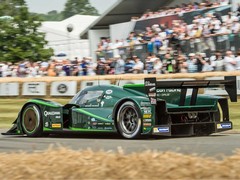 The dash is set to the most simple piece of information: percentage of charge remaining. We have 100 showing, but the car will only run about five laps of this short one-and-a-bit-mile circuit before it needs recharging. The batteries cannot be allowed to discharge fully either, so at 10 per cent remaining you pit.

The thrust is hard to comprehend at first, - actually, scratch that, summoning the courage to push the long-travel throttle pedal to the floor is more difficult. For the first loop I don't manage it, and still the car seemingly is picked up and flung into the next corner. Next time around I try full throttle - or whatever the new phrase for maximum everything will be on electric racers - and the effect numbs the brain. Because it is so instant. It just happens.

We think we understand the phrase 'throttle response' when in fact we've been messing about on the fringes for a century. You push your right foot, you end up 200 yards away from where you were and your head says "How did that happen?" I'm guilty of over-using the word, but it's extraordinary. Does it feel like three times the thrust of a Veyron pushing half the kerbweight? No, it doesn't. Because that would feel like a fighter jet doing aerobatics.

And it's problematic. Firstly, my brain just isn't calibrated to either deal or enjoy the immediacy - to channel a slightly crude analogy: the gratification just doesn't last long enough. I actually had to prepare my brain in advance to be ready to think about what was going to happen. The initial thrust is so great, think Veyron-and-some-more, that when it subsides after a few seconds into something less physical your brain and body are less than impressed. In reality, you are still accruing speed at an indecent rate. In complete silence. But that initial surge is so violent that what follows is less thrilling - much as it is in a heavily turbocharged, low-compression combustion engine once the boost has subsided. 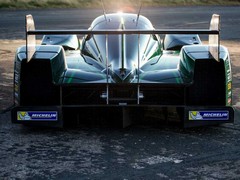 I don't know how I feel about the silence. It certainly cements a fascinating contradiction between the serenity of the powertrain and the violence of the acceleration but boy did I miss the conventional race car soundtrack - about as much as I missed having a gearbox to fiddle with. The steering is assisted and light, the chassis has far too much grip for me to explore on an airfield and, as is always the case with electric cars, the lack of mechanical noises from the engine bay just leaves you with a rather apologetic collection of graunches and squeaks from the chassis. At least wearing a helmet and radio set reduces their collective volume.

The brakes are insanely good. You can hit them as hard as you can push the pedal from 140mph and they won't lock. Even on cold wet-weather tyres, in the dry.

And then the charge ran out, so we headed back to base. Now I expected this first experimental machine to have reduced range, but being able to run at full for just 10 minutes is still a little disappointing: it slightly undermines the crazy straight line performance. Battery technology is improving and Paul reckons that we're five years away from a car with this level of electric performance being able to run a full stint at Le Mans. Sebastian Vettel won his first Grand Prix five years ago.

I've now had time to digest what I experienced at Elvington, and I have mostly positive thoughts. In fact everything about the quantity of the performance on offer, and the way Drayson and his team have already managed to keep the weight low (admittedly by not having enough battery cell to allow much running) is very impressive. 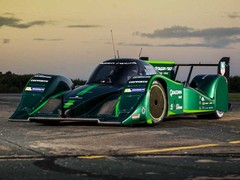 How long until we see pure EVs at Le Mans?

What worries me is the silence - and here I disagree with Paul. We'll post a video in the coming weeks, in it Paul presents a passionate endorsement of this kind of silent, electric performance as the future for fast road cars. He is actively excited by the thought of owning a car that performs in this manner. I find the thought quite chilling. Being thwacked down the Queen's Highway at some ludicrous velocity, in near silence might appeal to me as a passenger in a limousine, but not as someone who loves driving. What Paul sees as a new technological dawn is, to me, potentially the end of emotional driving. I suppose I always knew that to be the case, it's just that this car presented me with a full realisation of the situation.

For the likes of us, the next 20 years are going to be about adding an emotional cloak to this electric revolution - of that I'm sure.

And I don't doubt that Paul Drayson will fulfil his dream and race an electric car at Le Mans.