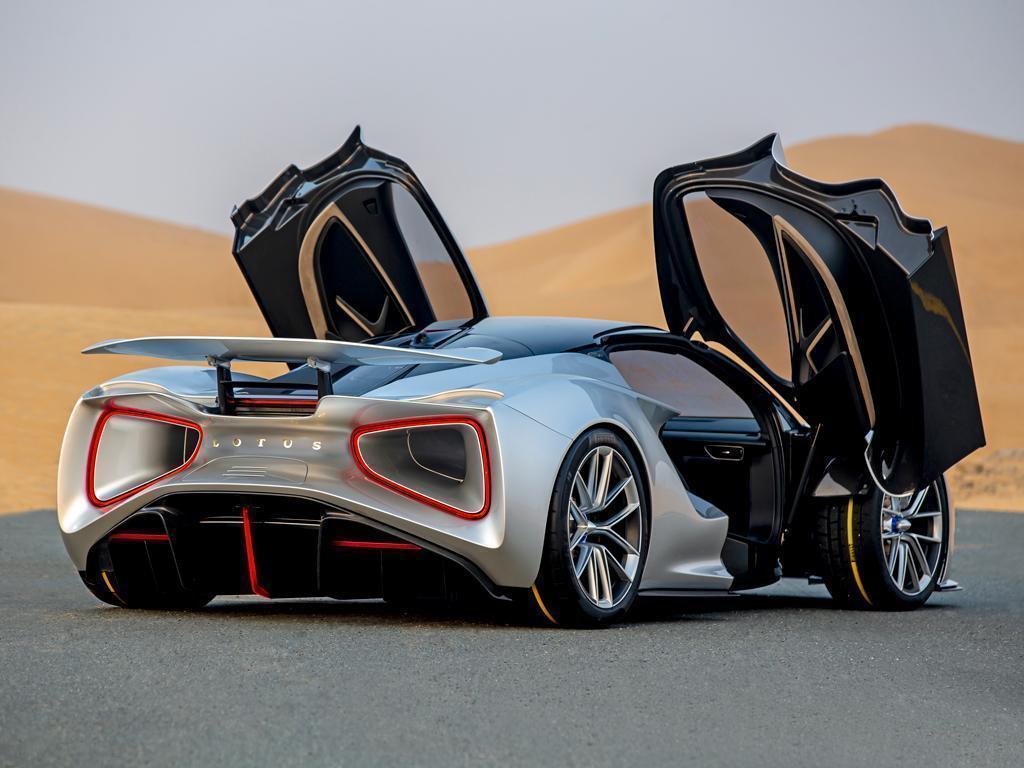 You can understand why Lotus has been so cagey about revealing certain details regarding the Evija. As the model tasked with leading the firm into a new era, it is justified in wanting to ensure that claims are validated 100 times over. While the 2,000hp hypercar’s design is now set in stone – or, rather, carbon – its calibrations are not, so engineers still face the challenge of tying together easily the most complex road car to come out of Norfolk. Not just in the all-new EV powertrain, either, but also in terms of the porosity of its aerodynamics, as well.

“The packaging opportunities of an EV have opened up big opportunities for aerodynamics,” chief Lotus aerodynamicist, Richard Hill, explains. “With no internal combustion engine to work around, battery profile and distribution allows us to try new things with the shape. The main one here being the directing of air flow through the vehicle. The Evija acts like one inverted wing at high speed.”

Hill – who joined Lotus in 1986 – says he has “been banging on about the concept of perosity for donkeys years” but has always been restricted due to “packaging arrangements”. So, as soon as it was agreed the brand was going to do a battery electric hypercar, “bang, that was it”. From day one of the Evija project, this innovative aero solution was at the heart of it all and that’s what gives the Evija its distinctive rear openings.

Hill explains that as soon as air interacts with the car’s frontmost features, it’s being directed in order to generate downforce. The floor underneath, for example, is sculpted so it induces a negative camber on the car, angling it like an inverted wing – the opposite of a plane during take-off. Airflow is also channelled through the front openings and diverted around the cockpit, with the intention of affecting pressure and also to keep powertrain components at operating temperature. That’s something Hill says was a particular headache in the design phase.

“It’s different and more complicated to cool the batteries of an EV like this than one with an engine, not because the levels [of cooling] need to be higher, but because there are more components and each has a narrower and more specific required level,” he says. “As such, we’ve got a very complex cooling system, which is so effective that there are no active grille shutters. It’s supplemented by an electric pump cooling system so there’s variable control via that, as well.”

Hill’s team – which he says has continued with the same small number of talented employees in recent years despite the injection of cash from parent company Geely – was able to utilise experience from motorsport and also external consultancy projects Lotus has had its hand in, to ensure that the airflow’s effects towards the rear of the car “reduce wake and exit air at a higher Z plane than at the front”. This, Hill explains, “introduces a negative camber”, with the “actual overall profile on both the top and bottom surfaces working together to induce this angle.

This brings back memories of Adrien Newey-designed Red Bull F1 cars, from the days when they would pierce through the air with an aggressive forward rake to achieve their championship-winning levels of downforce. Of course, there is a world of difference between a single-seater and an electric hypercar: “Formula 1 drivers will want a car to be semi unstable so they can get it rotated into corners, where as a road car must be extremely well balance and stable at high speed,” Hill says. “As such, this sort of car requires that high level of downforce but it should only produce it at the right time. So with the Evija design, we wind off the workload at low speed to create the efficiency needed for range, then at higher speed our design induces the downforce so the performance is there.”

Lotus has certainly proven the concept with its track machinery – several PHers have shared their first-hand experiences of the Motorsport Elise’s sculpted bodyshape in the forums. But in a road car, where the manufacturer is best known for ultra-intuitive chassis balance and exceptional tactility, will something this focussed on aerodynamics and driven by four Integral Powertrain electric motors, still feel like a Lotus? Is it even possible?

“Absolutely,” is the reply. “Because we have a proportionally balanced format and high level of lateral grip, without vast amounts of oversteer or understeer, just like our sportscars", so far as to say that the Evija is “more aligned with normal Lotuses than a motorsport product”, and because of its price point - £1.7 million plus duties and taxes – it’s got a higher level of “comfort and practicality, as the occupants [of this sort of machine] are more demanding of what they get.” He says that “it’s a road car but also the ultimate track car”.

Because the Lotus weighs 1,680kg – a figure that makes it lighter than several conventional supercars, including the 992 911 Turbo – it doesn’t need the additional suspension hardware so many of its rivals require to ensure high mechanical limits. It’s suspended on Multimatic's in-board adaptive dampers and 20- and 21-inch Magnesium wheels front and rear, like a racing car that uses a conventional powerplant. Only with a lower centre of gravity. And much greater traction. And all that aerodynamic performance. Suffice it to say that the longer you speak to Hill, the more you feel your expectations growing.

“Porosity is the part I’m most proud of, but to engineer it so it works with the styling and the aesthetics of the Evija, that’s also highly satisfying,” adds Hill. “It’s somewhat easy for us to design aero features that do what they need to do but sometimes they’re not the prettiest. But to work hand and glove with the designers – who I took down to the wind tunnel before they showed me the design studios – and make it all work, it’s come together to make something beautiful.”

Hill and his colleagues are understandably excited by the outcome, so barring one last hurrah for the internal combustion engine Lotus (click here to read about that), the brand is going into the future with electric power front of mind, and its head held high. Hill reckons the Evija has enabled the brand to hit the ground running, because despite being its first battery electric vehicle, the complexity of the project means everyone’s “learned a lot about the subtlety of how we design other EV products”.

“Those lessons will be carried into other cars,” says Hill. “It's no secret that Evija is intended to be a statement of intent of where Lotus wants to be in the future.”