The classic PistonHeads argument, played out for real between a brand-new Mazda and a second-hand Porsche... 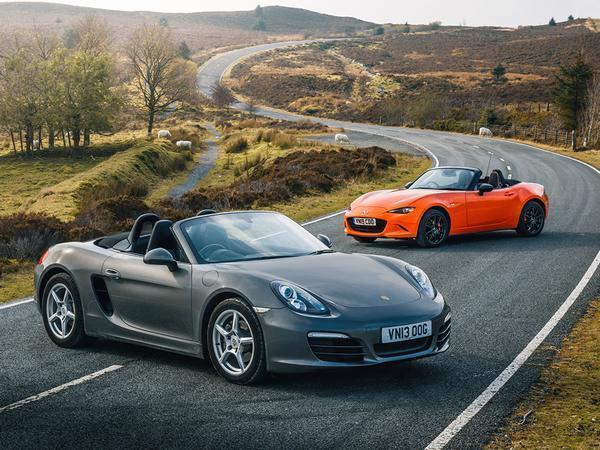 PistonHeads law states that within the first 10 forum comments after a new car review someone will pipe up "How much? You could have a used whatever for that!" These discussions have fuelled many a PH thread but, even if you could have a C63 or BMW M3 for the list price of that new hot hatch, the realities of buying and running one rarely stand up to scrutiny. And the same applies at every price point

I'll argue this one properly tests the theory though. Because once I'd got over the phwoar factor of the bright orange paint, Rays wheels, Recaro seats and Brembo brakes included in the 30th Anniversary Edition's spec I couldn't help reflecting that £28,095 is pretty punchy for a 184hp MX-5. And, for how you might use it, raises some pretty tempting used alternatives.

PH reflexes demanded I head to the classifieds, specifically to see how much approved used 981 Boxster you could get at for similar money and a sense of the new car Official Porsche Centre buying experience. Turns out quite a lot, a £30K ceiling getting a decent choice of low-mileage examples with the reassurance of factory parts servicing, fresh tyres, full 111-point mechanical inspections, extended warranties and all the rest.

Sadly 'all the rest' includes indifference to returning calls or emails regarding a seemingly perfect 13,000-mile, £29K manual Boxster with the two-year Porsche Approved Warranty, rather confirming the stereotype OPCs are more interested in folks optioning up Macans and Cayennes to score a place on the next GT3 shortlist than 'my first Porsche' used buyers. No matter, obliging Boxster owner Malcolm Quick was more than happy to play out, his manual, low-miles and warrantied 2.7 the perfect 'look at what you could have won' alternative to a brand-new MX-5.

There are, of course, two main considerations here. The fun one is comparing car against car, marvelling in the extra status, cylinders or horsepower the classifieds open up at the designated price. Hold that thought though, the real world is at the door.

Obvious attractions in buying new range from financial flexibility for how it ends up on your driveway, a fresh registration, the famed new-car smell and the reassurance that any issues are the dealership's problem and not yours. Pitfalls of going used are similarly clear, Malcolm's experience with the 987 this car replaced a textbook example of how reality can bite, a niggle with the hill-hold assist escalating into a persistent electrical glitch that repeated trips to specialists never quite resolved.

You're a sensible PHer who knows how to play the classifieds though, equipped with the support of fellow owners and some solid expert advice. So, to the fun bit. Which of these two cars offers the more enjoyable return on your £30K?

Sufficient purple prose has been lavished on the current MX-5 to make its appeal obvious. The exclusivity of the 30th Anniversary Edition - 370 Convertibles and 180 RF versions will make it to the UK - and desirability of its extra features are tempting enough for the fanboys, the gorgeous wheels and Recaros enough on their own to justify the extra two grand. Or, as we found out recently, you could lavish that same cash on a standard 2.0 and end up with an MX-5 that actually goes and sounds better, thanks to the dealer fit Cup Pack springs and exhaust package.

Without wishing to go full Queef the shafts of sunlight piercing the Snowdonian cloud, colour-matched autumnal shades complementing the orange paint and fiercely toasty heated seats make this a perfect day to be out in an MX-5. From the precision of its steering to the revviness of the engine and lovely short-shift manual its reputation for delivering a particularly innocent brand of fun is well deserved; this is exactly the kind of car you'd take out purely for the hell of it. That it is enjoyable under the radar of averaged sections of twisty A-road just underlines its relevance.

And then we meet Malcolm and his Porsche. Like the Mazda, 'baby' Boxsters like the 981 2.7 are unfairly dismissed by those hung up on statistical measurements of performance and prowess. Sure, 265hp and 206lb ft are not big numbers. And Malcolm's car is showing an unfashionable amount of sidewall on its standard 18s, at least by modern standards. But, as ever with Porsches, the opportunity to drive one in relatively basic trim simply underlines the quality of the base product.

I've been a staunch defender of the four-cylinder 718 engine. But the flat-six bark at start-up, turbine-smooth response to the throttle and howl beyond the VarioCam switchover are exactly the kind of emotional touchpoints that make this car a league of exotic beyond the Mazda. Manual 981s are hard to find but worth holding out for, the relationship between inputs to shifter and pedals and outputs in speed and sound more than making up for supposedly modest performance. The electric steering may lack the detail of the 986 and 987 but the 981 is only one generation from current and, compared with its contemporaries, a lesson in control weights and response.

Colour me predictable but the gearing is the only frustration, strangling the engine to a degree and leaving contrived shifts as your alternative to cruising everywhere in third. Fun in its way, though it feels like there's huge untapped potential and I'd happily trade top speed bragging rights for closer-stacked ratios like the Mazda.

In your every interaction with the Porsche it feels every penny the premium, sophisticated product, rewarding at any speed, as mature and composed on a cruise as it is on sweeping A-roads and just a lovely place to be. Although it's putting down a lot more rubber than the Mazda it's a refreshing change to be in a Porsche with a relatively modest wheel and tyre combo too, a little bit of squirm in the sidewalls no concern at road speeds and more appropriate to the 2.7's power output than the optional 20s worn by many.

I switch back to the Mazda and it immediately feels cramped, cheaply assembled and more in keeping with outdated stereotypes of Japanese cars. It's stylish and modern inside and out, and the Alcantara flourishes of the 30th Anniversary Edition lift it a little but it can't compete with the Porsche on perceived quality. It can in terms of driving appeal though.

Both engines relish revs, peak power in the Porsche coming at 6,700rpm (with over a 1,000 still to go before the redline) and the Mazda eagerly revving out to the 7,000rpm required to deliver its 184hp. Thanks to the gearing the MX-5 feels so much more zingy and alert though, the fact it weighs some 285kg less than the Boxster also a massive factor in its sense of playfulness and agility.

Where the Porsche feels planted and composed the MX-5 is always on its toes, the relatively soft springs and lofty standard ride height meaning it can get a little lively as the weight moves around. To the extent you need to be ready with a correction if you hit a crest with even a degree of lock on, the rear axle snapping as the tyres unweight. Fun in its way but I think I'd be spending that two grand on the lowering springs rather than the orange paint and anniversary plaques.

It's a shot of adrenaline after the more mature vibe of the Porsche, a cheeky little scamp of a car always egging you on to use more revs, push a little harder and try for more out of the experience. The Boxster has nothing to prove and risks feeling aloof at sensible road speeds. The Mazda is always up for it though. Fine when you are. Possibly a little tiring when you're not.

All of which is me conspicuously ducking the issue of which is actually the better proposition - new Mazda or used Porsche? Flexibility of buying, hassle-free ownership and the fact you can still buy a brand-new sports car with rear-wheel drive, a manual gearbox and fizzy naturally-aspirated engine remains a huge win for Mazda.

That the same exists recently enough in Porsche's back catalogue to be available with the reassurance of official support is, however, a powerful argument for the used option in this case and removes much of the apparent risk.

For the drive I'm calling it for the Mazda, while as an ownership proposition and something to cherish it has to be the Porsche. No, wait, the other way around. Oh hell. See you in the comments thread...

Search for a ND Mazda MX-5

Search for a 981 Porsche Boxster