£30k seems the entry to new hot hatch ownership; here are the best buys for half that 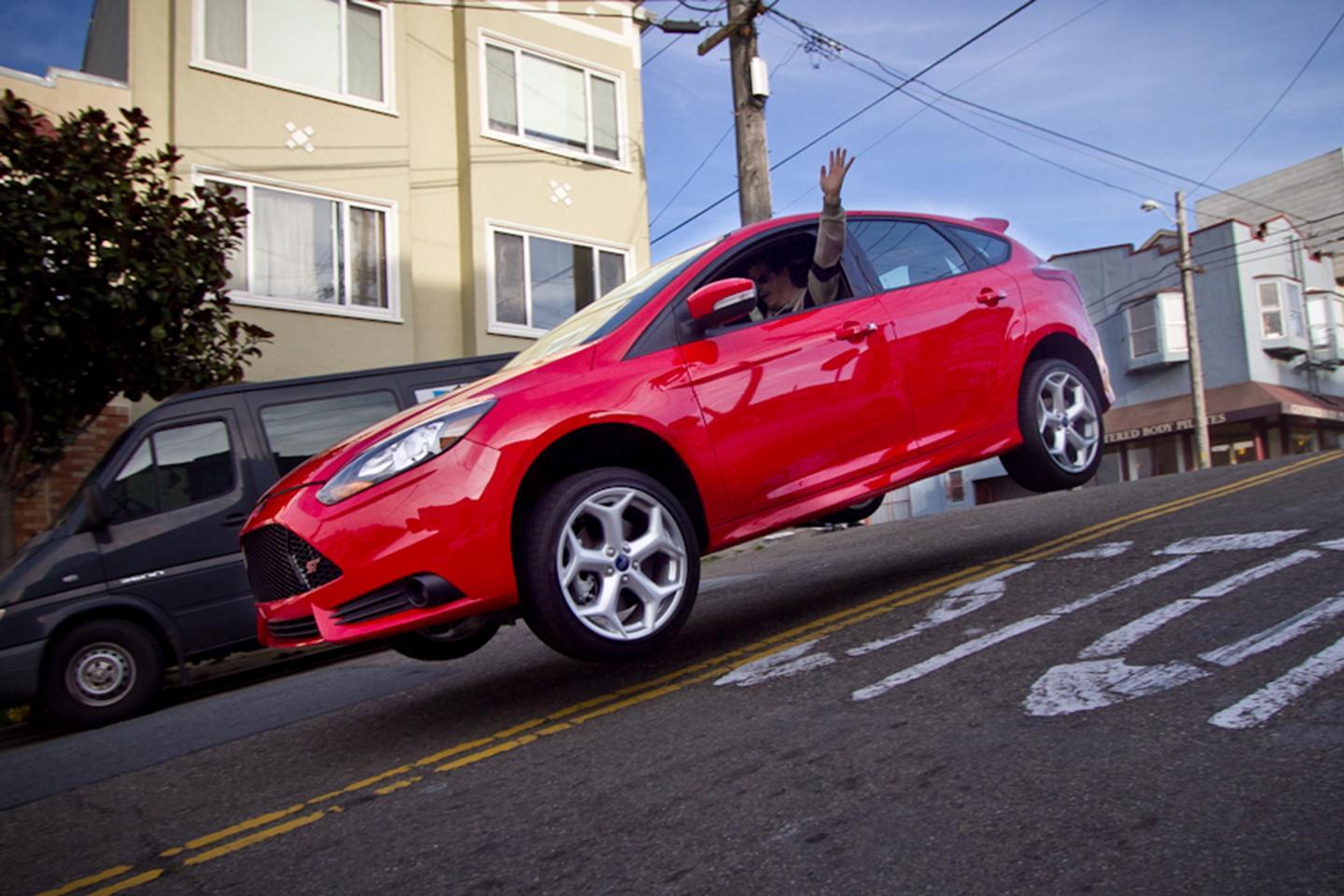 'The best hot hatch' question comes up so often because it remains such a perennially relevant buying decision. These are, after all, the do-it-all fast cars, as appealing to the singleton as to the parent, and used for everything from track days to staycations; if ever a single genre was going to crop up in discussion the most, it's the hot hatch. Because for so many people and so many situations, something fast, fun, and practical is exactly what's desired.

Even better, we've enjoyed a brilliant few years for the sector in the past decade, as almost 300hp has become the norm. There's yet to be a hot hatch improved by electrification, though - but it can't be far off - and the push to drive down emissions has killed some of them off already. Both Peugeot and Vauxhall seem unlikely to resurrect their performance brands under Stellantis, Ford has said no to another Focus RS, and Renault Sport will soon be no more (albeit with Alpine replacements coming).

So now looks like the time to pounce on a hot hatch from the purple patch just passed. Even with some great new cars just introduced, it seems unlikely that the variety seen in the very recent past - with everything from a six-cylinder, three-door BMW to a 1.6-litre, 270hp Peugeot on the market - will be replicated any time soon, even if they are the do-it-all heroes of automotive. Here goes...

Let's be clear from the off: as standard, there are better cars to drive in this list than the BMW M135i. Despite three doors and six manual gears as standard, it was more a shrunken GT than true pocket rocket. Great though the big straight-six was, its sheer size robbed the 1 Series of any true nimbleness, and BMW's bizarre decision not to fit a limited-slip diff as standard meant the engine's grunt could feel to be getting the better of the car. And that wasn't much fun.

But almost as soon as those complaints emerged, so did a raft of upgrades to get the most from BMW's M Performance hatch. Now, almost a decade after launch, a couple of thousand pounds spent makes the M135i into the car it always should have been, with better traction, composure, and fun on offer. And with the four-cylinder replacement having nowhere near the emotional pull of the original, so the appeal of a 3.0-litre car increases. It's a lot easier to improve a couple of suspension parts than it is an engine...

This one looks ideal; an M135i is enjoyable as standard, let's not forget. This Estoril Blue three-door has the six-speed manual for full old-school charm, but the eight-speed ZF auto is a excellent alternative also. It arguably suits the package better, in fact. But add a short shift kit into your aftermarket basket and the appeal of an automatic may well wane, even if the £15k initial spend will have gone as well. But if ever a car is worth spending a little extra money on, the M135i is it.

For a car launched with two-tone paint and a specific output like an old touring car, the 308 GTI stayed off the radar for many hot hatch fans. A shame, as its ability deserved wider recognition, but it meant a few canny buyers bagged the first great C-segment Peugeot hot hatch since the 306. That praise certainly still applies used, too.

Despite mellow looks, the Peugeot Sport 308 was a serious hot hatch. As standard, there was a Torsen LSD, enormous 380mm Alcon brakes, wider tracks, new front suspension, and Michelin tyres. With up to 270hp and less than 1,300kg to shift around, the GTI was significantly faster than it looked, too. Plus, the 1.6-litre four-cylinder turbo revved well and sounded good. Alright, the manual gearbox was a bit baggy and the interior occasionally infuriating, but the 308 deserved more success than it received.

Still, a less than favourable reception makes it look a bargain second hand. This GTI is the cheapest of our sextet at £13,995, yet there are three other pricier cars here with more than its 47,000 miles. It does have the Coupe Franche two-tone paint, which will put some off, but it should be noted that the Alcon calipers have been rebuilt (albeit with discs now from a different brand) - and that's not a cheap job. With a full dealer service history including one just a few hundred miles ago, plus refurbed wheels, it's a smart looking 308 - don't buy a hot hatch at this money without considering it.

With the latest Golf GTI, Cupra Leon and Octavia vRS having now been out for a while, the suspicions of many have been confirmed: for every single model, the last generation was superior. Not quite as sharp to drive maybe, but better looking and with a more intuitive interior. Just as fast, too.

The Golf comes later in the list, but the Leon Cupra was the obvious pick from the MQB cars, more fun than the Skoda and little more expensive. Without the brand cachet of the VW or the affordability of the Octavia, the Leon perhaps didn't sell in droves, but it was easy to recommend. With sharp looks, plentiful performance and handling that traded a bit of the Golf's smoothness for some traditional hot hatch rawness, it was competitive in a packed segment. A Nurburgring lap record, however contentiously earned and swiftly topped, added to its enthusiast appeal, as did an estate.

This Leon Cupra is how you'll find most: five doors and DSG, because - in case you hadn't heard - those are the hot hatches people actually buy. Track days are still possible in the family friendly one, after all; getting people into the back of a three-door is never going to become easier. While the ad is big on words and short on detail (and seemingly illustrated with pictures from a Blackberry), this looks a great way to spend £15k on a hatch. Three-door, manual ones are out there, too...

A predictable choice, sure, but for good reason: for a very long time, Renault made the best front-wheel-drive performance cars out there. Its current Megane is actually very good, too, but it seems unlikely to earn icon status like the old one. From a pretty humdrum Renault hatchback came a front-wheel-drive world beater, one that's still attracting new fans to this day. And it was Renault Sport's unflinching focus that made it so.

It's easy to forget now, given it went out of production half a decade ago, just how uncompromising the Megane was as a performance car. A three-door body with six-speed manual was decided for you, then the choice was to have a stripped-out Cup model or add those chassis settings to a regular model. Because a Cup chassis meant a limited-slip diff, and you had to have that. Then probably the figure hugging Recaro seats, the very nerdy onboard telemetry... the Megane wasn't really about fripperies. It was about being as fast and as fun as possible with front-wheel drive, a job it excelled at.

Which is probably why this 2012 car commands the same amount of money as newer, more powerful rivals. The lower mileage will have something to do with it also, but the Megane's appeal to a dedicated bunch of enthusiasts shouldn't be underestimated. Given the perfect spec of this 265 - Recaro seats, Cup chassis but 18-inch wheels - it's a surprise only 22,000 miles have been covered. Adding to that total will be a pleasure.

Though the Fiesta ST has become the fast-Ford poster car of late, there's plenty to recommend for the Focus. Primarily, in fact, because lots of the Fiesta's traits transferred to the larger car: it was great value, a hoot to drive, and plenty quick enough thanks to a gutsy turbocharged engine.

With £15,000 to spend, the facelifted version of the previous Focus ST is available, and it's well worth seeking out. As well as sharper styling, it tamed a few of the original's wayward handling tendencies, retaining the hooligan nature but smoothing off a few edges. There's never been a bad-driving fast Focus in 20 years, and the ST is certainly one of the best, offering engagement, entertainment, and refinement in equal measure. There aren't many cars you'll cover the length of France in a day with and still be happy to drive.

The ST's talents and value meant plenty were sold, so you're spoilt for choice second-hand. Though the top-of-the-range ST-3 is desirable, an ST-2 like this Deep Impact Blue one will have most of the equipment you'll need. Time won't have been kind to Ford's SYNC infotainment, however, so best invest in a phone mount at the least. But otherwise, the Focus ST should provide a huge amount of fun for not a great deal of money - just as a great fast Ford ought to.

This list needed a classic, and the R32 is it. Which might be a surprise, really, given many will imagine a Mk1 and Mk2 as a classic Golf, and this Mk5 still looks pretty contemporary. But if not a fizzy four-cylinder icon like those early GTIs, there's plenty that makes the R32 seem classic. Now it's no longer possible to buy a three-door, manual Golf, the layout of this one is interesting; plus more importantly, the VR6 sounded superb against other six-cylinder engines. Imagine the noise against droning four-cylinders - or electric motors...

Nobody is going to suggest that the R32 is the best driving modern Golf; the switch to four cylinders eventually led us to the all-conquering Rs we know today. But much like the BMW mentioned earlier, a memorable engine holds even more appeal in 2021 than ever. And the VW VR6, here at 3.2-litres and 250hp (only surpassed by the Passat R36), really was fantastic. A point not lost on those trying to sell R32s - though cars are available from £8k, you'll need more than £10,000 for one with fewer than 100,000 miles. The more desirable Mk4s can command anywhere up to £20k...

This Deep Pearl Blue R32 appeals with a recent Haldex service as well as a Milltek exhaust for even more snarl from the V6 and KW V3 suspension, which ought to help the doughy handling. The best part of £15k is a lot more than they used to be, and reflects the growing fondness for a nose-heavy Golf that wasn't any faster than the GTI. Now that's what a great engine can do.