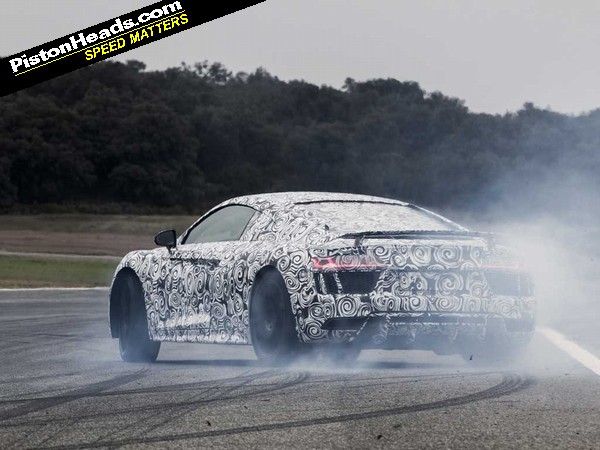 From the moment it launched

was the superlative useable supercar that somehow, eight years on, still challenges much newer rivals. But life's about to get a whole lot tougher. Soon it will have to battle with the

, Ferrari 488 GTB and any number of 911 variants from GT3s to Turbos. Not to mention the

with which it shares a platform.

Quite a job for the engineers. 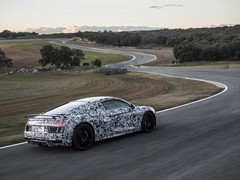 Can't be accused of not looking like an R8

The father of the R8, project manager Roland Schala, insists that from day one engineers had free rein in choosing how to evolve the R8 concept. That's why, according to Schala, the new second-generation R8 comes with a normally aspirated 5.2-litre V10 - instead of following its rivals down the smaller, turbocharged V8 route. This is one of the more surprising revelations on this pre-Geneva passenger ride.

But nothing, Schala says, matches the razor sharp throttle response or linear power delivery of a large capacity V10. With you there sir.

Curveball
The decision is all the more surprising given Audi has a perfectly acceptable 4.0-litre V8 twin-turbo under the bonnet of the RS6, RS7 and also used to great effect by Bentley. That engine, say engineers, can easily be tweaked to match the 540hp and 610hp the V10 will be sold with the added benefits appreciably more torque, lower emissions and better fuel consumption. The V8 could have also have helped define the character of the R8 compared to the Huracan, as discussed previously on PH.

Whatever the reasons, like the Lambo, the V10's been thoroughly reworked for both cars and gains new heads, crankcase, pistons and an all-new injection system. As mentioned, there will be two power outputs, Audi breaking with tradition by offering the most powerful 610hp Plus model from launch. 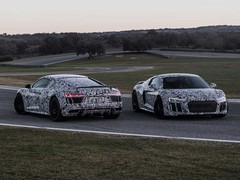 Disguise or not design is clearly evolutionary

Revving to a heroic 8,850rpm, the R8's V10 is expected to have been calibrated differently by Audi engineers to see it deliver its peak 413lb ft of torque lower in the rev range than the Lamborghini's 6,500rpm. But against the clock performance is near identical, the R8 taking the same 3.8 seconds to the 62mph benchmark but pipping its brother by 3mph to record a 205mph vmax, suggesting the Audi has fractionally less drag over the double ton.

Efficiency has also been boosted considerably with the new engine, incorporating tech like direct injection, stop-start, cylinder deactivation and coasting.

No manual labour
So it remains normally aspirated, but say goodbye to the R8's wonderful manual transmission. According to Schala, lack of demand ultimately killed off the R8's do-it-yourself shifter. But former Nurburgring 24-hour winner and Audi development driver, Frank Stippler, tells us on the event that even if a manual shift was offered the frenetic nature of the new engine, along with a power outputs well north of 500hp, would mean life spent on the rev limiter as you struggle to keep up with the shifts.

Instead, the R8 gets the same seven-speed Graziano-supplied dual-clutch gearbox as the Huracan - contributing to a 48:52 front/rear weight distribution. Again, like the Lambo, a Haldex 5 derived four-wheel drive system can distribute torque from the default 30:70 front/rear to 100:0 or 0:100, depending on the conditions. 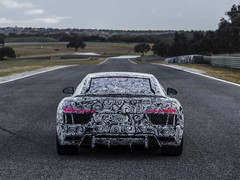 Snow and ice driving were also considerations in the R8. Apparently owners of the first generation happily used their cars come winter and found it didn't quite live up to its Quattro badge. That forced engineers to develop a specific 'snow' mode for one of the seven ESP settings.

Speaking of which, unlike equivalent Ferraris, there will be no ESP setting for controlled oversteer shenanigans because head of Audi's vehicle dynamics, Victor Underberg, despises slide-slip control. But not because he's a spoilsport.

"I hate the thought of programming in a 30-degree slip angle into my car," he says. "Sure, maybe once you'd try it but our system allows you to make the decision how far you can push. Synthetic drifts are also slower and take away all the enjoyment of balancing a car on the throttle. Where's the fun in that?"

What lies beneath
Like the Huracan, the Audi R8 is based on the all-new 'Modular Sportscar System'platform (MSS) that blends an aluminium spaceframe with plenty of carbon fibre to save weight. Schala says the new platform has been the R8's greatest advance over the old model. The new MSS underpinnings offer 40 per cent more structural rigidity, despite bringing a weight saving of 15kg.

Further weight is saved from using composite materials to make roof panel and the bonnet, but overall the R8, on average, is only 40-50kg lighter than the outgoing car, weighing in at 1,454kg for the V10 Plus. 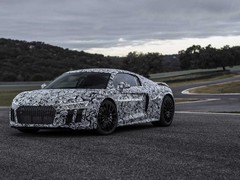 540hp and 610hp Plus versions confirmed

By this point it might be easy to imagine the R8 simply as a rebodied Huracan, but the spaceframe chassis is where both cars differ.

The story goes that Lamborghini designers were insistent that their car would have the traditionally aggressive short front overhang with a raked bonnet that can trace its origins back to the Countach. This meant the Huracan ended up 30mm shorter than the R8. Since Audi engineers had more room for manoeuvre they then stretched the MSS platform's wheelbase by a corresponding 30mm - a huge amount in engineering terms. And it's this length that, one insider slyly suggested, has had a transformative effect on the handling compared to its Sant'Agata brother.

Where the Lamborghini offers hyperactive responses and immense grip, at the absolute limit it falls into understeer. The Audi R8, on the other hand, should be more neutral-to-oversteer at the limit - hence the reason Audi engineers have added a quicker steering rack to gather up those drifts. And worry not, passive rather than the horrid 'Dynamic' steering is standard. 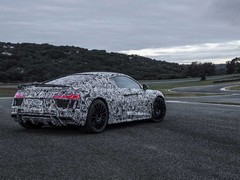 When we asked why the R8 lacked deformable spoilers, or blown rear wings or vortex generators to maximise downforce and minimise drag, Schala's response is blunt. "We got it right first time. Seriously, the shape of the R8 means it doesn't need any other tricks to improve its aero on the move - and if we did add some it will only increase weight."

Schala points to a simple adjustable front splitter that was in consideration but added a substantial 18kg to the kerbweight - all in the wrong place without a noticeable benefit to the driver.

Tyres were crucial in the R8's development especially since Audi wanted it to be far more useable than the McLaren 650S and Ferrari 488GTB. Victor Underberg again. "Unlike some supercar makers Audi worked with three different tyre makers to create a summer, winter and semi-slick performance option. We would give each tyre maker our specific performance targets and, after many weeks and months of development, they'd return with a tyre that matched our every wish. As soon as that would happen we'd go back to them and say 'Sure, these tyres are perfect but now we need you to go away again and make them more comfortable'. We didn't make their lives easy."

So what about the cabin? "Expect less TT and more bespoke instruments that are more specific to the R8," says Schala. Having said that the R8 interior is dominated by the same 12.3-inch TFT customisable display from the new TT, and, indeed, the Huracan. That's no bad thing of course, especially how well it works in the junior Audi coupe. And Schala says the benchmark for interior quality was the A8, which bodes well. 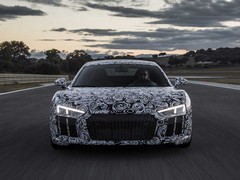 Meanwhile he point blank refuses to discuss the return of a V8 to the R8 range. Instead he prefers to hammer home how Audi's supercar will be used as a technical flagship. You could therefore speculate the aforementioned turbo V8 will return with the rumoured plug-in hybrid powertrain for green cred and/or torque filling purposes. The on/off (pun intended) all-electric R8 E-Tron is also expected to return as a full production vehicle but far more exciting is the prospect of an R8 'GT3' road car spun off the race version that runs down the same production line.

Victor Underberg confirms many lightweight parts, like the firm's carbon fibre reinforced plastic springs and anti-roll bars, plus a whole host of other carbon fibre parts already in development. They only missed out this time because Audi wanted a 'highly competitive' price for the R8.

Which brings us to rivals, Audi as much as anyone keenly anticipating arrival to market of cars like Honda's hybrid NSX. With that car rumoured to cost £150,000 when it eventually lands this summer, we'd be amazed if the current R8 Plus costs more than £140,000.