Alpina BMW X7 in the works

Alpina purists, avert your gaze - the uber X7 is on the way... 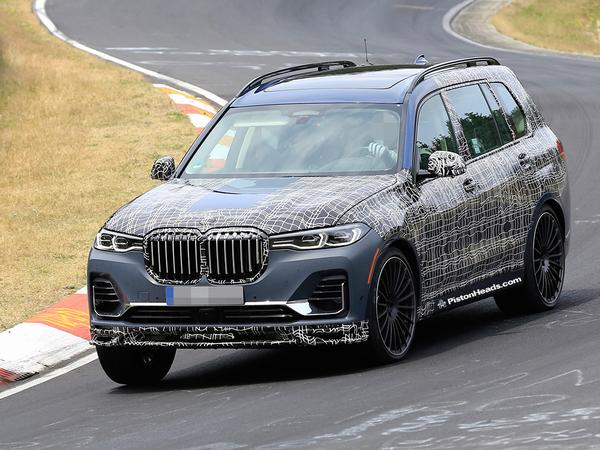 It was kind of inevitable, wasn't it? BMW is making more and more SUVs to cater for demand, as well as extra performance variants for those who want them, while Alpina made its first venture into SUVs a few years back, with fair success. Without an X7 M confirmed as yet, an Alpina X7 was something of a certainty.

And here it is. Just in case an X7 didn't have enough presence - if indeed that is the right word - as standard, the usual Alpina accoutrements have been fitted for even greater impact. The multispoke wheels - surely 22-inches here, or larger - and bodykit arguably have a more pronounced impact, just because everything is so enormous. Note also the trademark blue calipers (on discs made to look like saucers behind those wheels) but not the quad exhausts typically found on Buchloe 'bahnstormers.

At the moment the Alpina X7's powertrain is unknown; the 3.0-litre straight-six M50d would make the ideal rival for something like the Audi SQ7, its 400hp/560lb ft maximums surely tweakable to somewhere beyond the Audi's 435hp and 627lb ft. Otherwise the 40i petrol would be the donor vehicle, though its crucial stats are much less potent: 340hp and 332lb ft. A tweaked version of that engine would pitch an Alpina'd X7 against... well, we're not sure. The full-fat AMG Mercedes GLS uses a V8 with a lot more power, as of course does a Porsche Cayenne Turbo.

Still, Alpina is going to find a way, either with petrol or diesel, to spin its own take on the X7. Given its work on more conventional sporty BMWs - see the B4 and B5 as examples - there's a reasonable likelihood that it'll be really quite good as well, painful though that might be to admit. Our sources have suggested that the XB7 or XD7 will make a debut towards the end of the year, which is probably just the right time to remind you that the LA auto show takes place in November...