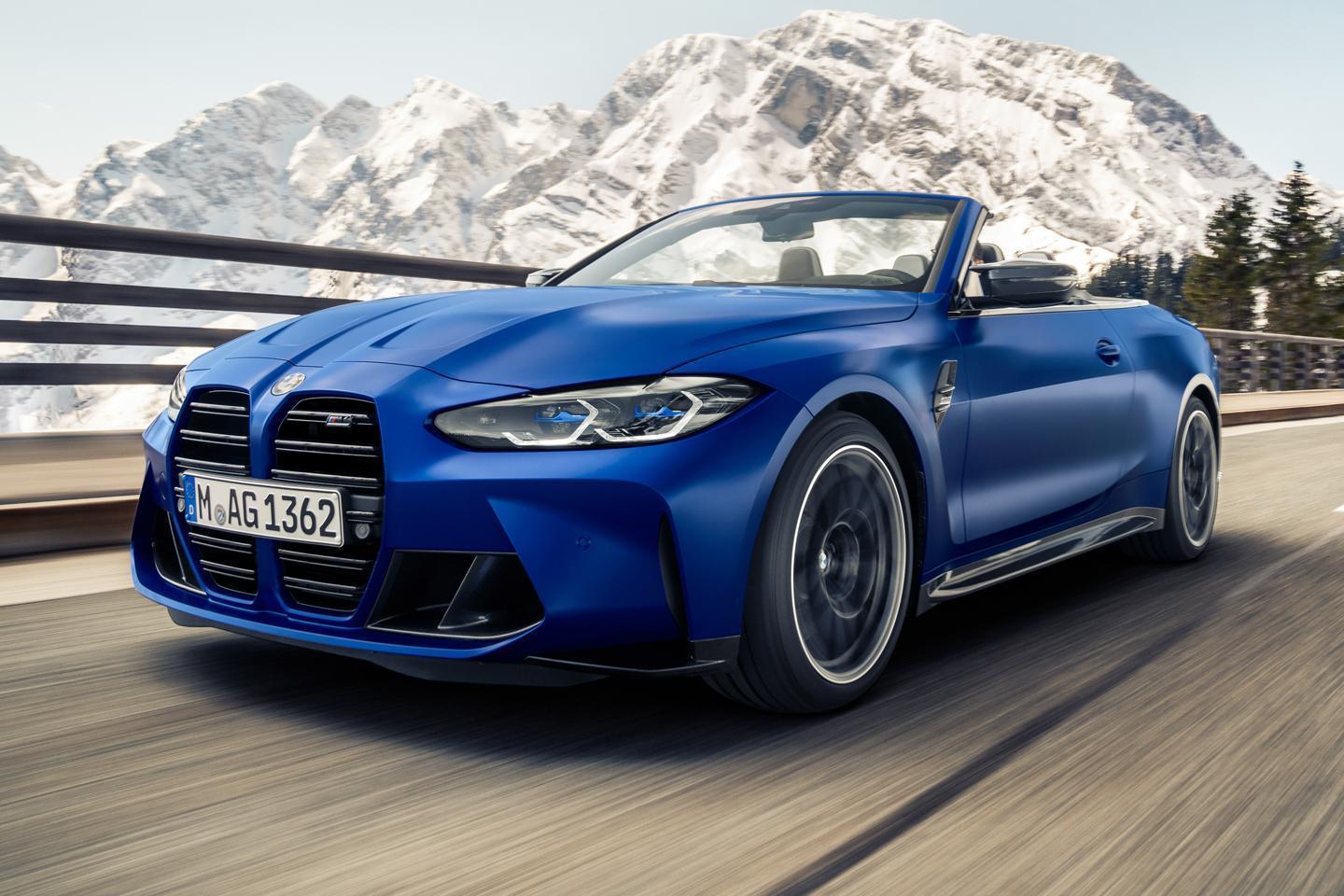 BMW has revealed the G83 M4 Competition Convertible before it goes into production this July, confirming that it’ll deliver 510hp through an xDrive chassis as standard – and switch to a folding fabric top. Combined with the standard-fit eight-speed automatic gearbox, the two-door model can sprint from 0-62mph in 3.7 seconds, making it the first open-top M4 to crack four-seconds. As with the tintop xDrive variant, BMW promises rear-biased performance, although those wanting the purest setup will be disappointed to learn that no rear-wheel drive version is planned for the UK.

In fact, the grade of car pictured is going to be the sole specification of M4 convertible launched in Britain, because BMW doesn’t offer manual gearboxes with any of its xDrive models. Moreover, buyers here tend to spec high performance drop-tops enthusiastically, meaning that car on offer is intended to appease the anticipated demand. That makes the pricing simple to explain at least; the new model starts from £81,915.

The technical setup is familiar enough, with the S58 straight-six producing 479lb ft of torque alongside that outright power figure, easily enough to ensure the convertible has to be limited to 155mph like its coupe sibling. The only notable differences between the regular and convertible versions are, of course, related to the soft-top. BMW switched to a folding fabric roof for the M4, to save weight – it’s 40 per cent lighter than the F83’s lid – but it claims no loss in refinement as a result. It can be folded down at speeds of up to 31mph in 18 seconds.

Certainly, the claimed weight saving of the rag-top bodes well for the convertible’s handling, with the G83 platform coming with the same claims for boosted structural rigidity as the G82. Of course, losing the roof has required significant additional underfloor bracing, and the drop-top also gets unique torsion struts at the back. As with all xDrive models there is a specific double-joint spring strut design for the front axle, alongside bespoke axle geometry and steering ratio. As standard, the convertible gets 19- and 20-inch wheels (front and rear).

The rest is M4 Competition as we already know it, including those ever-divisive front grilles. Which, dare we say it, might be growing on us (or possibly just growing.) But it's conceivable that the convertible bodyshape helps soften the front end somewhat. Or perhaps we’re just becoming normalised to the look eight months after the G-generation M cars were first revealed... Either way, expect the convertible car to be as popular as ever with UK buyers. The timing of the car’s reveal just before a bank holiday weekend that promises sunshine shouldn’t do the customer enquiry list any harm, either.

Nor will the introduction of two new sub-M 4 Series models with all-wheel drive, the 430i xDrive and 420i xDrive, which both arrive in July, along with the 430d Convertible. Additionally, BMW's top non-M4 variant, the M440i, will now be rear-wheel drive as standard, likely lowering its starting price (presently £54k) and apparently appeasing customer demand. Turns out not everyone wants their 374hp two-door with xDrive. Who'd have thought it?