S-Class seem a bit old hat? The EQS is Mercedes' luxury EV future - and there's a 760hp one coming, too 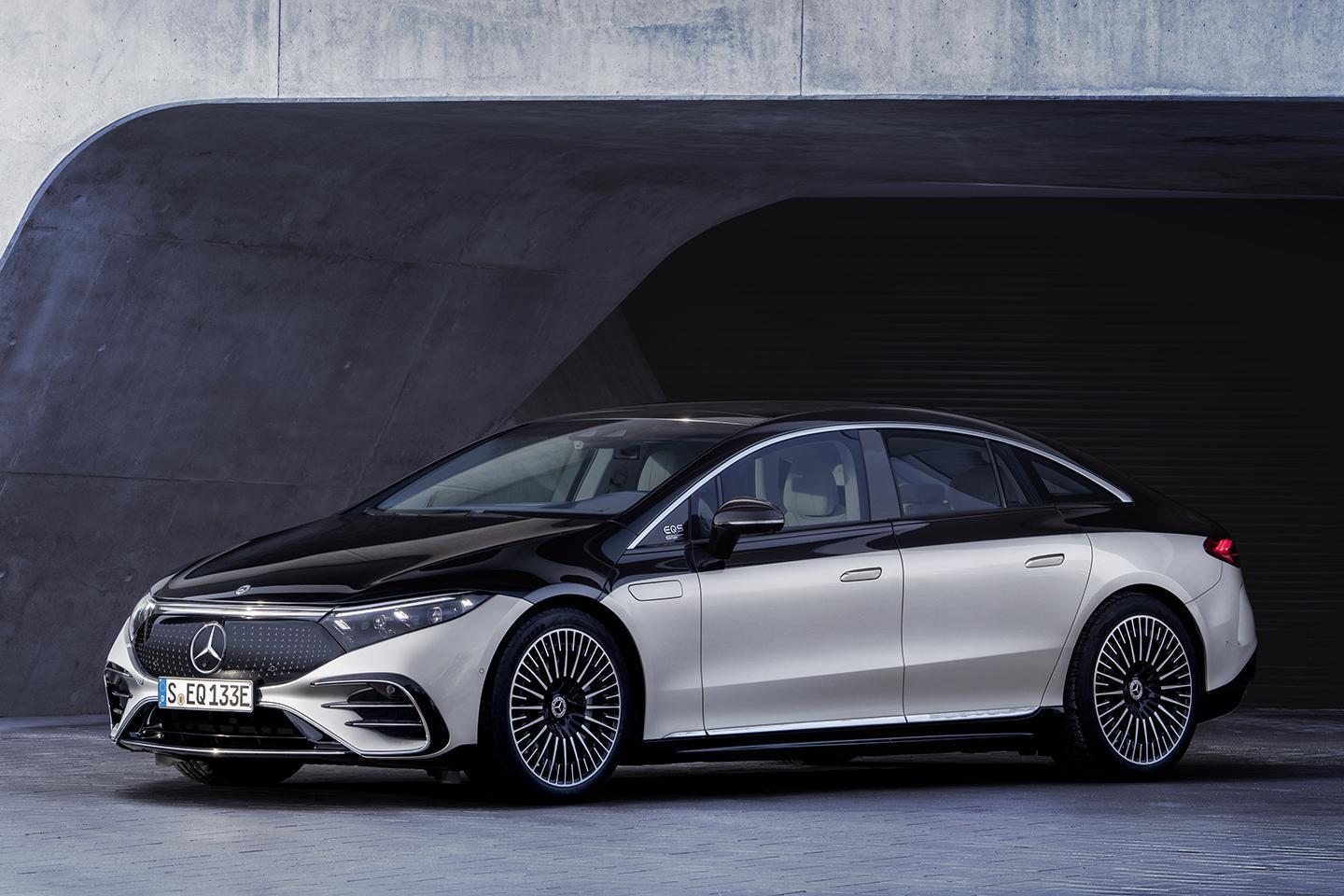 The idea of a dedicated electric luxury car has been discussed for a good while now. It was going to be the core strategy for Lagonda's relaunch, Bentley has committed to building nothing but BEVs from 2030 and Jaguar says it will do the same five years sooner. The Porsche Taycan and Audi e-tron GT are conclusive proof already that big four-door models can certainly work with electric power. But they're better classed as sports saloons; this Mercedes EQS is the first all-electric luxury four-door. The first of many, it would seem...

Certainly there's not going to be any missing it. The EQS is more than five metres long and quite unlike any other Mercedes ever before seen. There are cues familiar from other members of the EQ family, including an EQC-style light bar and a grille familiar from the EQA, but the sheer scale of a luxury saloon ensures it has a look all its own. For what it's worth, Mercedes describes the design as characterised by "reduced lines, precise gaps and flowing transitions", a "new purism" realised "in superior fashion".

Some might have an alternative view. The design freedom permitted by the bespoke electric platform underpinning the EQS create proportions not exactly reminiscent of the traditional Merc flagship. But, then again, that's probably the point - buyers after a traditional Benz flagship can still have an S-Class. Importantly, the manufacturer says the look ensures the EQS is the most aerodynamically efficient car in production, with a drag co-efficient of just 0.20Cd. The original Honda Insight scored 0.25, so that's quite some achievement from Mercedes.

Low drag has benefits for range and refinement, obviously, both of which are going to be crucial to the EQS's reception. A new generation of in-house developed energy dense batteries means up to 107.8kWh usable content. Depending on the model, Mercedes claims a range of up to 770km (478 miles), too, which ought to be enough to alleviate any lingering range anxiety. Naturally any updates will reach the EQS over the air.

Initially, the car is going to be offered as either a rear-wheel drive EQS 450+ with 333hp or a 4Matic EQS 580 (which adds another of the eATS electric powertrains on the front axle) with 523hp. Both cars have a limited top speed of 130mph; the 450 reaches 62mph in 6.2 seconds, the 580 just 4.3. Which is quite something for a car with a 2,585kg kerbweight. Mercedes says that a performance version of the EQS with more than 760hp is coming, too, which sounds worth waiting for.

Perhaps of more relevance - at least to most customers - will be the ability of the EQS to charge at up to 200 kW, meaning a theoretical 15-minute charge for 186 miles of range. The Mercedes me Charge network has 200,000 charge networks in Europe, and co-founded the Ionity network. To put that into context, a Porsche Taycan is only able to charge at 150 kW. Home charging for the EQS is possible at up to 22kW AC using the onboard charger, meaning even the bigger battery should be well topped up after a good night's rest.

That said, given the look of this interior, customers may not want to leave their EQS for measly homes. Expect to hear a lot regarding the MBUX Hyperscreen in the coming months - the entire dash here is one enormous, 141cm widescreen. So enjoy seeing one without grubby prints over it! Mercedes says an all-new approach to the interior was in keeping with the car's remit as its first model built on an all-electric platform, as digitisation continues to revolutionise buyers' expectations. It's said that all the important applications of the user interface require no sub menus and there are 12 actuators for haptic feedback under the screen surface; should you need to delve into the system further. As should eight CPU cores, 24GB RAM and 46.4GB per second RAM memory bandwidth. And you thought CarPlay was a significant development for infotainment...

There's so much more besides, too: buyers can have four automatic doors if they wish, rear-axle steering can turn as much as 10 degrees, more than 350 sensors monitor everything about the car (including the driver) and the navigation will even estimate the cost of charging on your chosen route. And we've barely even scratched the surface of Mercedes' 32,000-word epic on the EQS. Plainly the manufacturer is going all in on the electric luxury saloon; in a way this feels as significant as the W140 S-Class did, potentially redefining expectations of both Mercedes and the genre.

"The EQS is designed to exceed the expectations of even our most demanding customers. That's exactly what a Mercedes has to do to earn the letter 'S' in its name. Because we don't award that letter lightly." explained Ola Källenius, CEO of Daimler and Mercedes-Benz. Those demanding customers won't have long to wait, either, with the EQS expected on UK roads in the summer.