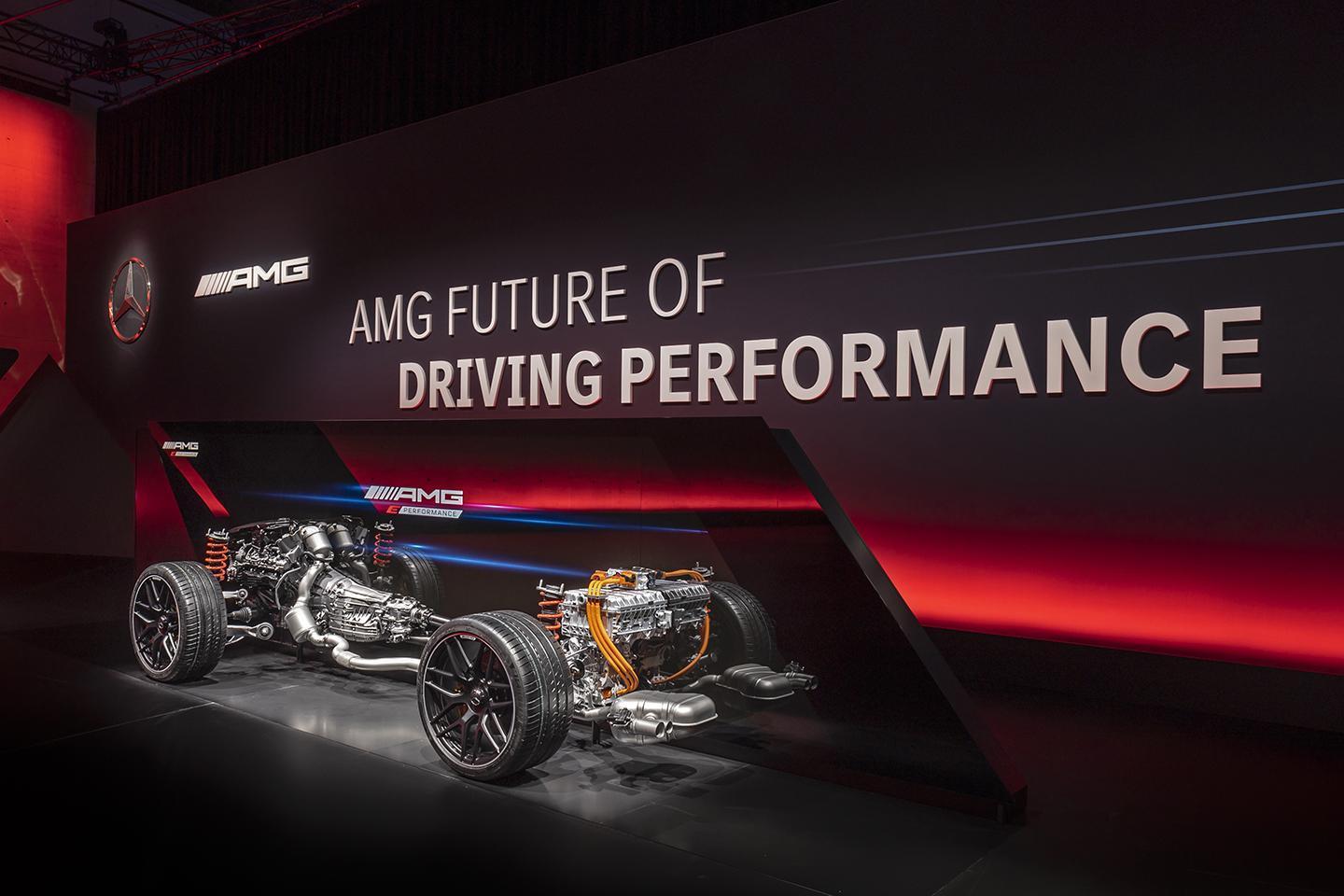 So it’s official now and beyond doubt: Mercedes-AMG will remake its much-loved V8 C63 as a hybrid four-cylinder model by the end of 2021. Using a comprehensively reworked version of the A45’s turbocharged 2.0-litre along with a rear-mounted electric drive unit, the incoming BMW M3 rival will have around 650hp, 201hp of which will come from the in-house-developed electrical gubbins. No doubt it’ll be rapid. But it won’t be an AMG V8.

Of course, the writing has been on the wall for yonks, and you could argue that for Mercedes-AMG, a firm long synonymous with thumping V8s, to make such a significant switch to electrification this early in the decade is a bold move. It’ll still make V8s, with the division confirming to PH in a recent invite-only press conference that the GT four-door 73 is indeed due this summer with a hybrid V8 E Performance setup offering over 800hp and 738lb ft of torque combined. The first customer Project Ones are also due for delivery late this year. Big stuff, but as expected. Losing the nose-heavy C63 will still hurt.

Predictably, AMG used its E-performance presentation to really hammer home the technical capability of its all-new hybrid setup. The modular hardware is to be largely identical in the opening 73 and 63 series models, and several more after them, using a fully in-house developed rear-mounted battery pack with 650 individually water-cooled lithium-ion cells, to enable consistent peak performance. HPB80, as it’s called internally, is a 6.1kWh battery said to dispense and absorb energy much faster than conventional alternatives thanks to a power density that’s double the industry average. The tech has apparently been pulled straight from Lewis Hamilton’s F1 car, and developed by AMG’s UK-based High Performance Powertrains to enable 94hp of constant power and a 201hp peak.

To ensure punchy low-speed performance and continued supply of torque at high speed, the 18,000rpm electric motor will drive through a two-speed gearbox. Second is engaged from 87mph, with the ratios set to be set to ensure “a good match to the engine’s wide window of torque”. Key to the character of AMG’s future hybrid models will be the division of petrol and electric power in this architecture; in both the eight and four-cylinder cars, the battery will power the rear-mounted motor exclusively, although interestingly, the prop shaft that connects both ends will allow for torque to travel in both directions. This comes as part of the layout’s active torque juggling in order to boost traction; should the rear be slipping too much, electric torque can be sent to the front axle. If that has you scratching your head, you’re not alone.

All in, the electric hardware adds 200kg to the car, but AMG’s team assured PH that in the C63 at least, the added mass is somewhat countered by a lightened engine. Not only is the 2.0-litre, mounted in the C63 longitudinally, obviously going to be lighter than the 4.0-litre V8, it’s said to use more lightweight components in a bid to counteract the weight gain. We’ve no numbers yet, but we’re told to expect a “near perfect” weight distribution, as well as tight packaging at the rear, with the axle’s limited slip differential integrated into the electric drive unit itself. AMG confirmed that both 73 and 63 models will be full electric capable, but the ranges – neither of which were even hinted at – aren’t set to be particularly large. The focus here, we’re told, is on performance and efficiency in hybrid modes.

Emphasising that is the next C63’s engine, which gets plenty of its own innovations in a new M139 specification. Producing 443hp alone, the four-pot gets an electric turbocharger said to offer the “benefits of both small and large turbos”, and the throttle response of a naturally-aspirated engine. It uses a 400v power supply to spin at speeds of up to 156,000 rpm, with the blower and electric motor “connected to the high-temperature cooling circuit” of the engine for optimum temperatures throughout. Additionally, both the four-pot and V8 engines get belt-driven starter generators for an extra 14hp boost and more throttle reactivity.

Somewhat inevitably, the four-pot C63 will have the naked performance to match the present V8 model, with the added benefit of all that extra traction. The 800hp-plus 73 will obviously take a step forward compared with the performance of its siblings – a 171hp power advantage over the 63 S ensures that. You can drive both in a conventional manner, which is to say leave them in hybrid and leave the regenerative tech in its most relaxed setting, where coasting is possible. But you can also wind up the regen to its maximum 90kW recovery level, where one-pedal driving is possible. AMG admits this might be annoying on a track, but that it’s the most efficient mode for road driving. And before you ask, thanks to the quick charge of the battery, you’re never left without enough electric power to provide maximum hybrid performance. Those peak figures are permanently possible. AMG is yet to reveal plug-in charge times.

Following these two first series run AMG hybrids, more will follow using the same split of front-mounted four- or eight-cylinder and rear-mounted electric motor. The electric setup is said to be modular, so larger, more range-focused batteries could be added, but it doesn’t look like there are immediate plans to integrate the inline-six currently used in mild-hybrid forms. AMG CEO Philip Schiemer hinted that an all-electric platform is in the works, but ensured nobody could question him on the matter – “that’s not for today,” he said. For AMG, like every major brand, increasing electrification is inevitable, but it’s to be a gradual process. One that, Mercedes assured us, takes into account the importance of emotion and character in its core models. It’s ingenuity in that regard is about to be put to the test.