Audi's range-topping Q8 remains on course for its RS badge 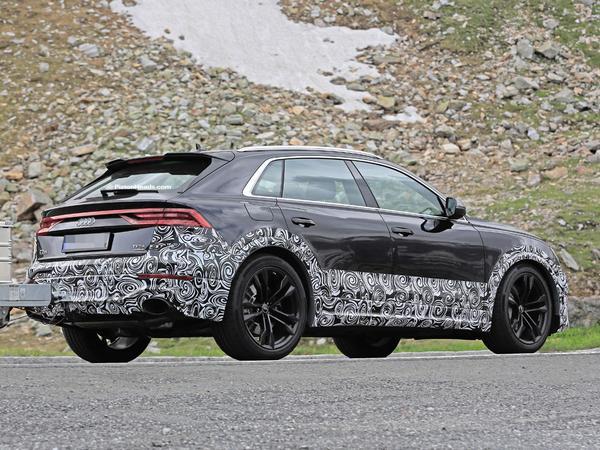 UPDATE - 23-07-18
Hear that? It's the turbocharged V8 heart of Audi Sport's next RS Q8, which has been filmed testing at the Nürburgring by our everdiligent spy snapper. Due out next year as a rival to the Range Rover Sport SVR, the high performance heavyweight - unconfirmed by Audi Sport but, well, there in the video - shares its underpinnings with the Bentayga and Urus.

All the detail remain pinned to Ingolstadt's chest, although it seems almost certain that the same electric anti-roll bars appearing in the Audi as they do in the other high performance versions of the MLBevo platform (given its apparent lack of roll on video). No sign of the new RS6 on the same afternoon sadly, but naturally we'll keep you posted on the progress of Audi Sport's much more interesting wagon...

ORIGINAL STORY - 12-06-18
No rest for the wicked, eh? With the dust barely settled on the Q8 unveil, our bush-bothering snapper has already caught what appears to be an RS version testing (towing, in fact) on German roads. Naturally there's no official confirmation yet on whether or not a fully-fledged Audi Sport variant is inbound - but it does rather make sense given the model's direct rivals (the Range Rover Sport SVR among them) and the fact that its shared underpinnings have already been made to go very fast indeed by both Bentley and Lamborghini.

See the humungous tailpipes? You can bet whatever is left of your lunch money that those are connected to the twin-turbocharged 4.0-litre V8 that fills out the engine bay of most of its siblings. See those brakes? They're humungous, too. All the better for stopping two-tonnes of offensively fast SUV. Expect that camo to conceal what appears to be a fairly modest reworking of bumper and sill. And expect, as well, circa 600hp if it is an RS (because that's more than a Bentayga, less than a Urus) - unless, of course, Audi has snuck a newfangled hybrid powertrain into the SUV mix. In which case all bets are off.

Adding credence to the range-topping speculation is the proximity (like right in front) of a next generation RS6 mule. In this case, the 55 TFSI badge is fooling no-one; again we get the giveaway oval exhaust pipes, but we also get the telltale flared arches - indicative of the widened track the model has worn since forever. No prizes for guessing which engine is most likely to feature here, too - nor its output, with the internet already speculating about a 650hp figure to improve upon the 605hp the previous Performance version departed with. Which would also coincidentally exceed the 625hp produced by the forthcoming BMW M5 Competition.

While we wait for the conjecture to be confirmed one way or the other, let's dwell briefly on looks. The outgoing model, no doubt about it, was the Anthony Joshua of the estate car division. No matter what you thought of the car underneath, it undisputedly looked the part. The new one? Possibly not so much. The current RS4 and 5 have already been toned down for a 'sleeker' appearance; seems the RS6 is destined to follow. Which is a shame, no? Sleek is for supercars and two-door GTs - hugely powerful wagons are best when dressed like Yakuza.