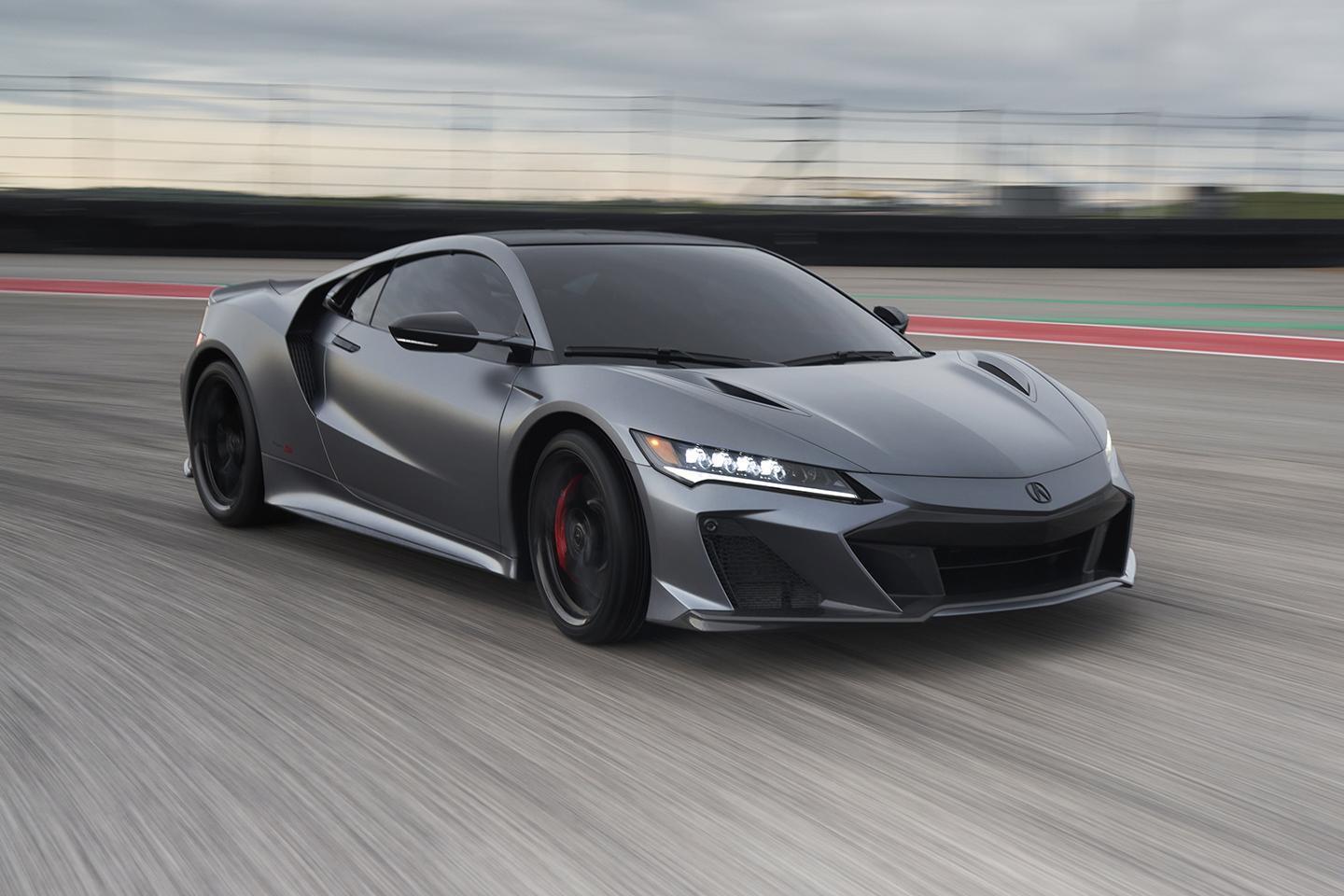 There was a suspicion that the current Honda NSX (or Acura NSX, as it's known in the USA) would leave production with a whimper. Despite plenty of accolades it hasn't sold spectacularly well (in Europe, at least) and the odds of a direct replacement look slim. If Honda does a supercar again, it's surely going to be all electric. It's pleasing, then, to confirm that the run-out Type S - the runout special for the hybrid NSX - sounds like the real deal. This is not simply tacking on an evocative badge to shift the last few cars.

Power and torque are up marginally from standard, the totals now standing at 600hp and 492lb ft respectively. Though just 27hp and 16lb ft more than standard, the methods employed to achieve the gains are interesting. The pair of turbochargers are borrowed from the GT3 racer (upping the boost to 1.1 bar), the injectors are new and faster flowing, and the intercoolers are uprated as well. Combined, they mean the 3.5-litre, 75-degree V6 is contributing 520hp and 443lb ft to the grand total on its own. (Previously those figures were 500hp and 406lb ft.)

Honda says the Intelligent Power Unit that powers the motors is "used more efficiently", that usable battery capacity if up by 20 per cent and power by 10 per cent. There's even been a change of ratio for the front motor unit, to boost torque and improve the launch. All told this means more input dynamically from the electric side and a greater EV range, though Honda still won't actually quote one. So don't expect much.

The dual-clutch gearbox has been tweaked to reflect the new remit of the Type S, including a new Rapid Downshift feature (hold the downshift paddle for six tenths of a second for the lowest possible gear), more aggressive downshifts if you want to go down one by one and faster upshifts in Sport and Sport+ as well. Given the DCT was very good without being great before, these sound like welcome improvements. And that's before mentioning the most notable, which is a tweak in Track mode that allows downshifts a substantial 1,500rpm sooner than previously. Think of the difference, say, being able to change down at 6,000rpm rather than 4,500rpm might make on a circuit.

The chassis modifications suggest the NSX Type S would relish track driving, too. The offset of the new forged wheels increases the track by 10mm up front and 20mm at the rear, with standard Brembo brakes (six-piston front calipers, four-piston rear) behind them. There are new bespoke Pirelli P Zero tyres, in addition to reworked aerodynamics, with a rear diffuser inspired by the GT3 car, a larger front grille for more radiator air and a carbon spoiler to reduce lift at the front. The really committed can spec a Lightweight Package for their Type S, which saves 26kg. Mostly that's through the fitment of ceramic brakes - a carbon engine cover and caron steering wheel accents won't help much - but any saving on what's always been quite a heavy car is welcome.

Marshalling all this are the same drive modes familiar from the standard NSX. 'Quiet' focuses on that improved EV range to make silent progress wherever possible, Sport tenses up the dampers and makes the AWD system a bit more fun, Sport+ ramps up the torque vectoring even further (with quicker shifts, too) and Track is where the Type S really gets to strut its stuff: as well as the downshift changes, new sound profiles should ensure it sounds as good as it looks.

It's hard not to think this is how the NSX should have appeared back in 2015. Even in the muted Gotham Grey launch colour (nine others are available), there's presence and and a fair bit more aggression to this NSX - thank the new aero bits and the track increase for that. And very welcome it is, too. Additional tweaks include dark-tinted lights front and rear, 'Type S' decals, Berlina Black exhausts, and a carbon roof.

Another Monterey debutant, Acura says the NSX "is the ultimate expression of the brand's commitment to Precision Crafted Performance and firmly establishes Type S as Acura's performance halo." Hard to agree entirely on that given it's being established in very limited numbers for a very short time, but a few track-focused NSXes are better than none at all.

Which brings us to the bad news. Honda/Acura will make just 350 Type S NSXes (and only 70 in Gotham Grey), but 300 of those are already allocated for North America. And 30 are going to Japan from the Marysville Performance Manufacturing Centre where all the hybrid NSXes have been built. Which leaves just 20 remaining, and an awful lot of the world. Hopefully one or two can make it to the UK, though it seems unlikely given how few of the standard car sold. Fingers crossed, eh?