Partners on track, rivals on the road but who does the 'everyday exotic' better?

Yes, another outing for 'the PH McLaren'. Hopefully, this is a worthy and interesting comparison though, because it certainly proves so on the road and provides a 'missing link' from our

against the Porsche 911 Turbo S and Audi R8. In

the McLaren rather left the others behind, at least on a sense of occasion. But then you'd hope so, given its £155K basic list price would get you the Audi or Porsche with a healthy options spend in the bag. And our long-termer as specced is a £180K car. 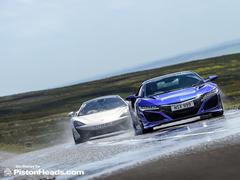 McLaren wishes the GT to combine a sense of the supercar exotic with everyday usability though. Just as Honda wants

to do, the two cars closely matched on paper with the Honda's 581hp, £149K starting price and as-tested figure coming up at £180,250. Further spice is added to the comparison by the shared F1 heritage and a historic partnership that has seen the pair earn countless victories togeth- ... oh.

This at least spares us speculation about McLaren tapping up Honda for the NSX's hybrid powertrain for future road car use, the 570GT taking a more single-minded and minimalist approach where Honda has thrown the kitchen sink at the NSX and brought hybrid hypercar tech to the junior supercar price point. The two cars start and finish at similar places. But their routes there are completely different. Begging the question, are McLaren and Honda better as rivals than they are as partners? Let's find out!

is a dazzlingly complex car. You could lose yourself in the tech - and that will appeal to some - but in some ways, it's better to just put it to the back of your mind and deal with what you have. Which is to say an Integrated Dynamics System controlling 11 parameters influencing how the car drives, bundled into four modes going from Quiet to Track, via Sport and Sport+. 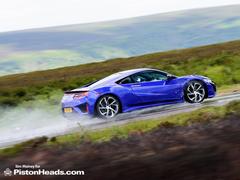 Quiet is nicely relaxed, the NSX far more isolating on a long run than the McLaren. On a very, very gentle throttle, it'll give you EV only mode but you can't manually select it. Still, it's fun seeing the rev needle drop and humming through villages on electric power alone. Interestingly over the same motorway/A-road run and for all its hybrid cleverness, the NSX's trip computer records slightly worse mpg than the McLaren; that both can cruise at high 20s or even low 30s is commendable though. And in town, the NSX's hybridness can come into its own.

We're out in the wilds though. Here Sport is probably the NSX's most natural mode, the steering feeling direct but not edgy and the ride still smooth and controlled. The shift to Sport+ is dramatic, the V6 announcing its arrival at the party with a bang, turn-in much more aggressive and the whole character of the car taking a decisive step toward 'supercar'. It's exciting but as you start pushing harder the McLaren feels like it is easing into its comfort zone where the Honda feels like it is contriving its responses into a more digitally enhanced impression. Both cars use 'braked' wheels to help them turn in but the McLaren's steering feels less corrupted and you roll it into the turns with one smooth input. In the Honda it's all a lot more urgent, the way the front axle motors can tug the front end into the corner often meaning you need to wind lock back off, the suspicion being that it needs to 'feel' artificially agile to offset the extra weight. 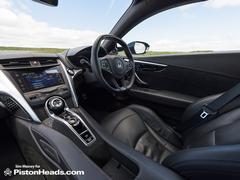 If the NSX is a 'simulation' it's a very, very good one though and the calibration of the various systems is impressive. The instant punch of the electrically assisted powertrain can catch the McLaren napping and the NSX always feels capable of dramatic acceleration, with noise to match from the V6. With so many gears you quickly lose the will to shift yourself though, robbing you of an important interaction. And on wet roads in Sport or Sport+ that instantaneous throttle response can destabilise the car to surprising degrees - get greedy on the throttle on a wet roundabout and you need to be ready with the correction because most of that 581hp is going to the rear wheels. Immediately. And the NSX can feel surprisingly snappy.

An absolute credit to Honda though. Given the complexity of what's going on underneath the NSX is a surprisingly natural feeling car from the get-go. And one with a sense of much to learn further down the road. First impressions are good. But you also get the sense there's much more to learn as you go and the rewards will keep coming.

Plenty has been said about this car on PistonHeads already but this comparison proves compelling from the moment your bum hits the seat of either. OK, in the McLaren that involves navigating novelty doors and a chunky sill but once in position both are keen to present a clear picture of the road ahead. 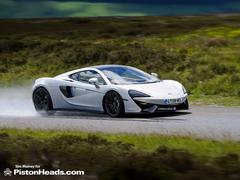 As previously discussed the McLaren's scuttle is incredibly low, the glass roof adding to the sense of airiness and the pillars seemingly tucked out of the way to give you the best possible view. In keeping with the original NSX's user-friendly ethos Honda has worked hard on this too, using fancy '3D quenched' steel to keep the A-pillars as slim as possible. Neither car is small and the illusion of Elise-like dimensions vanishes when you come to park up. But credit due that on a challenging road both give you confidence to place them accurately and then appreciate the very different ways they go about their business.

The on-paper stats are remarkably similar too. The McLaren is just 9hp down on the Honda's combination of electric and internal combustion power, the 3.8-litre twin-turbo V8 not far off on torque either at 443lb ft against the Honda's combined 476lb ft. You need more than double the revs to achieve that though, this being the first hint towards the drastically different characters of these powertrains. 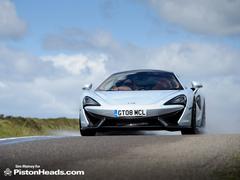 Lag is the dominant impression of the McLaren off the back of driving the Honda. Caught in the wrong gear it can take what feels like an age for the turbos to spool up. But, boy, when they do the GT really takes off, that explosive surge beyond 4,000rpm never less than extraordinary. That'll be something to do with the fact the McLaren weighs around 300kg less than the Honda. That's a lot. And it informs plenty about how two cars with comparable on-paper stats can be totally different to drive.

The McLaren's lack of weight means it can afford to move around more on its springs than the Honda, the brilliant damping meaning this is beautifully contained but much more informative of what the car is up to, where the weight and grip is in the chassis and offering a sense of flow you don't get in the NSX. It's a lot more raw, cats eyes thumping through the tub, camber changes rippling through the wheel and the traction easier to manage than the all or nothing Honda.

It's a very simple car to understand the McLaren and rewarding of those who really appreciate the nuance of feel and feedback. From steering weight to brake pedal feel there's a mutual respect between car and driver that makes it a delightful thing to engage with.

For all their similarities and comparable price and performance the way these two cars operate is so different as to pick a 'winner' seems unfair. 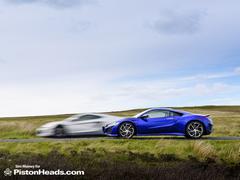 Saying one is 'better' than the other would be like asking respective fans to choose between Apple and Android. Or, to put it another way, two identical burgers made from prime beef cooked to absolute perfection. If the McLaren is enjoying the subtle flavours and quality with the minimum of garnish the Honda is the same but packed with all the trimmings. Blue cheese. Bacon. Onion rings. Gherkins. The lot. Nothing wrong with either approach. And satisfying in their own way. But appealing to different tastes.

There are objective qualities that can be picked out though. The McLaren is a richer experience and one that never entirely switches off its eagerness to communicate the fine detail of road surface, grip levels and all the rest. For a car with 'GT' in its name, it's still a long way down the sports car end of the spectrum. The Honda has a broader range of abilities, albeit less focus in any one of them. But it'll waft in comfort and silence you don't get in the McLaren. And when you do want to go maximum attack do a properly convincing impression of the 570GT's sharpness, up to a point that most drivers would be satisfied with. 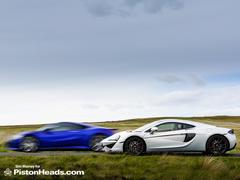 It's also a bigger stretch for a mainstream carmaker like Honda to build a convincing supercar of this complexity from scratch than it is a pure sports car brand like McLaren a slightly more comfortable version of an existing product. Respect to Honda for that, and perhaps mitigation for the time it took the NSX to come to market.

Praise for its focus as a driving tool and its sense of occasion will be a recurring theme in any verdict involving the McLaren. But as an achievement and a product - and for bringing what was previously million-quid hypercar tech within reach of 'regular' supercar buyers - the Honda makes for a fascinating and compelling alternative. Maybe they are better as rivals than as partners.