Hybrid hypercar tech for the masses or needless over-complication of a classic formula? PH drives the new NSX...

The technical presentation for the new Honda NSX is interesting for more than just the innovation packed into this 21st century remix of a 20th century classic. Extravagantly mustachioed vehicle dynamics boss Nick Robinson represents the US side of the new NSX's

and puts an outgoing American twist on the earnest enthusiasm that characterises Honda's engineering culture. But it's his description of the

as a 'disruptive' car that catches the attention.

It was certainly a wake-up call to a somewhat lax establishment. Here was an exotic, mid-engined junior supercar as focused and pure as any Porsche or Ferrari. But as demanding to own and drive as an Accord. Driving gods like Senna endorsed it. But you didn't need his talent to enjoy it.

Over a quarter of a century later, does the new NSX's relative democratisation of hybrid hypercar tech achieve the same aim of shaking up a complacent performance car world? 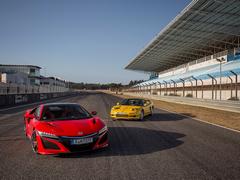 Here we are at last!

We'll attempt to answer that. But before getting too bogged down in jargon-heavy Hondaspeak it's best to just get behind the wheel. Which is exactly how it goes. Before we're even talked around the car it's straight out onto the intimidatingly fast and old-school Estoril circuit.

After what feels like years under the motor show spotlights (oh, it HAS been years), out in the real world the NSX looks refreshingly neat and compact. The complex styling is a nice analogy for what's underneath but, at the wheel, that all fades into the background and it feels approachable and friendly. Exactly like the original.

There's a four-step rotary dial controlling the Integrated Dynamics System; given the surroundings it seems appropriate to hold it all the way to the right, wait for the warning chime and select Track mode. This dials up the most extreme settings of 11 different control systems, slackens the reins of the stability control and gives you the most alert and aggressive NSX at your disposal.

Immediately it feels like a proper supercar. This is no BMW i8 future vision of a frugal, eco-conscious performance car. Like the McLaren P1, Porsche 918 Spyder and LaFerrari it simply embraces hybridisation as a means of going faster. For a tenth of the money. 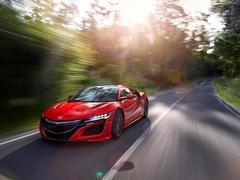 Heart of the matter

Electrically assisted or not that 3.5-litre, twin-turbo, dry-sump V6 is the dominant force in proceedings. As it is on paper, contributing 507hp and 406lb ft to the combined system total of 581hp and 476lb ft. It's unique to the NSX, the unusual 75-degree bank angle helping lower the centre of gravity while relatively low-pressure turbocharging permits higher than usual 10:1 compression and a revvier nature. The 48hp Direct Drive Motor sitting between it and the nine-speed dual-clutch gearbox help fill in the blanks before the turbos spin up. But the sound and sensation is pure internal combustion.

Pitched into the tight exit from the pits the steering is fast, light and direct, the front end diving eagerly into the turn. As we learn later, the two front motors assist here, the inside one able to apply retarding force, the outer driving into the bend. Meanwhile at the back Agile Handling Assist offers a similar effect to McLaren's 'too trick for F1' Brake Steer tech, though the NSX also has a conventional limited-slip differential. Suffice it to say, there's a lot encouraging the NSX into the corners. And, once there, even more inspiring an explosive exit. 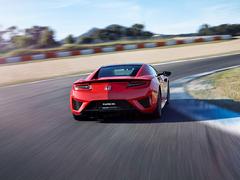 Turn in and get on that throttle!

With the front end so quick to turn in, and the lock already winding off, the invitation is there to get on the power hard and fast. Immediately there's a clearly communicated sense of rear-biased rotation, which isn't surprising given that's where the vast majority of the power is going. With no mechanical connection to the rear axle the front motors don't have to wait for diffs to lock up, as they might in a four-wheel drive 911 Turbo or an R8. And they only contribute a maximum of 37hp to each of the front wheels, so the balance under power is always into oversteer. If subtle their stablising effect is important though, the pull from the front helping you exploit and enjoy the push from the rear.

Three laps in and there's already confidence to get hard on the throttle very early in the turn, the V6 responsive and eager to rev out to its 7,500rpm peak, the sound channelled from an additional intake chamber and into the cabin via speaker-like exits behind the seats. Nine ratios may seem like a lot to be going on with but with first for launch and ninth for cruising third, fourth and fifth give you all the options you need for most corners and make manual control via the paddles a natural choice. No doubt, this is proper!

Powerfully built
Comparisons with driving the equivalently priced McLaren 570S, 911 Turbo S and Audi R8 V10 Plus in a similar context are inevitable; immediate impressions are that the NSX feels both punchier and more playful than the R8, as stable and fast as the 911 and as agile, readable and fun as the McLaren. Despite being the heaviest of all of them by a long shot and a whole 400kg more than the latter.

Back in the pits as the heart rate returns to normal a more cool-headed appraisal of the car is possible. The NSX we've driven on track benefits from nearly £10K's worth of carbon fibre aerodynamic embellishments, not to mention £8,400 carbon ceramic brakes and - slightly cheeky - Pirelli P Zero Trofeo tyres. No wonder it feels so sharp on the track... 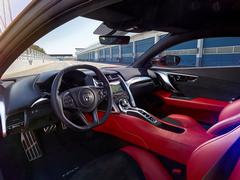 That central rotary dial is the important bit

Out on the road there's a little more time for objective assessment of a more representative NSX as a package and a product. The interior is stylish and well made but at a tactile level the plasticky switchgear isn't going to give Porsche or Audi any sleepless nights. And the navigation system would be considered second rate in a Civic, let alone a six-figure supercar. For all the complexity of the powertrain the rotary Integrated Dynamics dial makes it easy to slip between Quiet, Sport and Sport+ modes, the former changing the exhaust routing from near-as straight through out of the centre two pipes to a silenced path to the grouped outer ones. Indeed, the vocal range varies by as much as 25db as a result. Even at their most relaxed the two-step magneto-rheological dampers are a little brittle at low speeds but, overall, the chassis has an impressive balance and cruising refinement is very good. Quiet also encourages short stretches of EV-only propulsion, though even the slightest tickle of right foot reawakens the petrol engine. Hybrid it may be, but this ain't no Prius.

At road speeds the V6 is a little more droney than at its high-revving, maximum attack mode. But the whole Advanced Sports Package (Honda jargon for the powertrain) slips seamlessly between EV, torque-filling hybrid power and regenerative charging of the battery while coasting or braking. The complex brake by wire system juggles retardation between discs and regeneration and shows some inconsistencies on track - harsh snatches where you were only asking for a stabilising dab for instance - but feels more natural at road speeds. Under deceleration you can hear a whine from the front motors as they switch to generator mode but there's clearly been some very clever calibration work throughout and the tech is mainly unobtrusive. 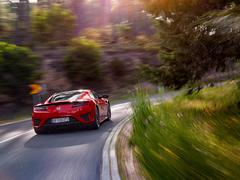 No doubt it's very good, but some doubts remain

And that's the overriding impression the NSX leaves on you. Technology that just a couple of years ago was the preserve of million-pound super exotica is now available at what most would consider the entry level for proper supercars. That is genuinely 'disruptive', living up to the original NSX's brief.

But for all the cleverness there remains a nagging doubt. The package works. But with 507hp and 406lb ft on its own the petrol engine already has the firepower - and character - to keep up with the rivals at this price point. And what would this car feel like with 300kg stripped out? It's a tantalising thought. Doubly so when you consider there's a GT3 race car that does exactly that, removing the hybrid gubbins and leaving good old suck-squeeze-bang-blow to get the job done.

That being said, Honda needed something to make the NSX stand out from the crowd at its chosen price point. Simply delivering a fast, good-looking and usable mid-engined sports car wouldn't have been enough anymore - the establishment heeded the original wake-up call. So hybrid hypercar tech for entry-level supercar money is Honda's chosen provocation. Achieved with some style. Given the NSX would probably do similar numbers without the battery pack and motors to what end though? Commence the head scratching!

Watch the Estoril onboard lap