It's already fairly bonkers as standard, so what's a Type R like with 385hp?

It won't have escaped your attention mainstream performance cars have, for the most part, lost a bit of edge. Sure, emissions and safety regulations will have contributed, but buyer expectations have changed too. We apparently want our cars to be fast, economical, safe, fun, torquey, revvy, high quality and low price - you get the picture. It's how you end up with cars like the Golf R, its flawless delivery on all of the above oddly its biggest weakness. 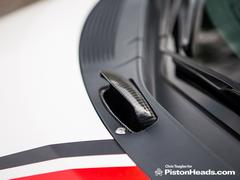 has been forced to adapt. Sure, the engine is the big change, but remember too that it's now five-door only (because that's what people are buying), that it comes with a lot more standard equipment and that its road manners are far better than previous generations. But what if you want a bit of rawness and edge added to your Civic Type R? Dream Automotive may well be worth a call.

The car you see here its Safety Car for the Honda VTEC Challenge race series, so look beyond the stickers if you can. What's underneath is, to these eyes at least, not only a more assertive and cohesive looking Civic Type R, but one with a few quirky details we thought had been lost as tuned cars like these get less common. Like white Rota Grids on a Championship White car, and the Eventuri intake right up by the windscreen. Some may like them, others certainly will not. 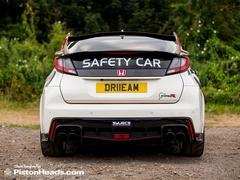 It doesn't start auspiciously, to be honest. Though this will no doubt sound like the complaint of an Insight driver, the combination of that intake with Dream's own sports cat and a Mongoose 3.0-inch exhaust is loud. Really, really loud. It's not especially tuneful either, nothing yet seemingly able to address the Civic Type R's rather anodyne sound. And the intake makes a lot of very prominent hissing noises every time you lift off. Which is quite frequently in traffic around Watford.

You'll need the brakes too, which squeal in admonishment because you're not trying hard enough.

And everyone looks. Everyone. That's a far more subjective drawback than the above - some may love the attention - but through a combination of the looks, the graphics and the noise, there's no possibility of making subtle progress in the Dream Type R.

However the flipside to all this, and what so many all-rounder cars lack by comparison, is a feral, wild, intoxicating side when the opportunity is there. Sure, this makes it a car about highs and lows, but when you and the car are on one of those highs it becomes impossible to consider the comedown. Not only does it feel every one of those claimed 385hp, the Civic makes use of them too. Initial throttle openings on some more interesting roads are conservative for fear of bonfiring the front tyres (still the same 235-section as standard), but it just keeps digging in as you get greedier and greedier with the accelerator. Then you'll begin to notice some slip driving through second, and the two black lines left in your wake. Which are pretty cool. Still though, it feels like it's driving forwards convincingly at this point, not squandering the power. And it's so damn fast! 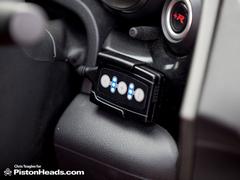 But let's go back a few steps to the corner approach, because there's a lot more to learn about the Dream Civic. Where they had frustrated in town the brakes are mighty away from it, the Tarox floating front discs and upgraded pads providing yet more stopping power and confidence over an already very good standard car. The pedal is almost race car firm but there's progression to it as well; it's easy to forget how enjoyable good brakes can be until you try something like this.

Those Toyo R888R tyres not only help traction, but they give the Type R a welcome hit of extra turn-in bite too. While the standard car is quick to respond from the wheel, it's not always the most precise for hitting an apex. This car is certainly improved, the suspension drop surely helping that sense of heightened agility and eagerness. They don't adversely affect the ride earlier, and would probably be our first modification on a new Civic Type R.

Even more than the standard car, this Civic feels like it's begging to be used on a track. But just on the road, the right road at least, it's outrageously good fun. Those brake, tyre and suspension tweaks have raised its abilities to a level you marvel at but can still appreciate day to day, and the additional power that's been liberated is addictive. The delivery is quite old-school too; boost arrives at around the same point as the standard car but because it punches harder it feels like you've been waiting longer.

In the right circumstance (that caveat again), it feels absolutely, hilariously brilliant. The Remus Responder fitted by Dream is worth a mention here as well, offering different throttle maps independent of the +R mode. Given throttle response is one of the biggest bugbears of the standard car, this simple tweak is another one well worth having - the pedal responds far more immediately, making that rush of boost all the more exciting. 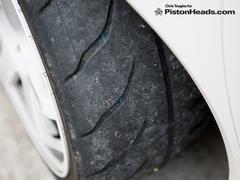 But very soon you're heading back along the dual carriageway, the fun is over and the Type R becomes a little wearing again. The comedown is here. Moreover, as standard cars get more and more capable, the window for tuners to operate in arguably gets narrower still. Or sillier presumably, depending on your viewpoint. Think where the last Civic Type R was in terms of circuit ability compared to the current car.

There are, however, a couple of points worth mentioning here. This car is Dream's test bed, where all the parts are evaluated to see which works best. As a customer you can pick and choose your favourites, of which there are a few that stand out.

Take the springs, certainly, and some more aggressive tyres. The Toyos might be a bit much if you're not planning track use, but they would definitely be worth a try for a circuit goer on standard power. Same goes for brakes - Phil at Dream has already tried three sets of pads on the Type R, rating the Project Mu HC800 as the best. They would probably be best suited for road and occasional circuit use, the disc upgrade there for the more committed.

As for power, it feels like you would want all of the chassis upgrades for 385hp. But once 385hp in a Civic has been experienced, it's pretty hard to think about going for less power! From this test, the trouble would be with the additional noise. If you can live with it then great, but it would be well worth investigating all the options to obtain that headline figure before committing.

Whatever you decide on, it's nice to see further potential already being realised in the Civic Type R. While it may not objectively be the best FWD car ever, this Dream Safety Car is easily the most exciting front-driver I've ever driven. And isn't that what tuning is all about? Bring on Honda's Type RR.