British motorsport in all its eclectic, eccentric glory as viewed from the sharp end of the Birkett Six Hour 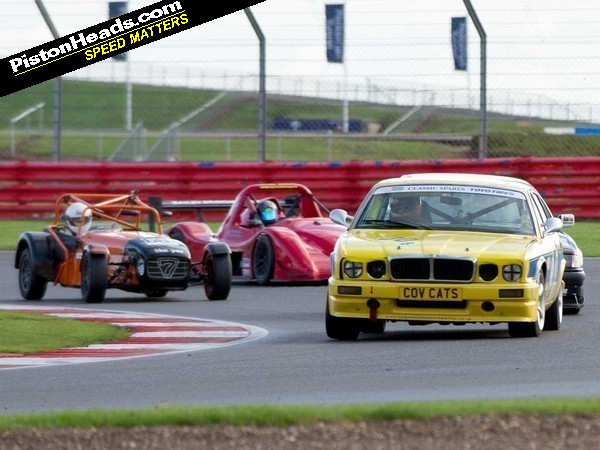 You'd hope by now I'd have an idea of exactly what the Birkett Six Hour Relay was all about, at least in racing terms. Nope. A Tweet from teammate Gareth Evans some way into Saturday night revealed a scratch result of 45th and a handicap position of 53rd for Mazda Motorsports Team Jota in which I played some small part. Is this impressive? Disappointing? I still have no idea. 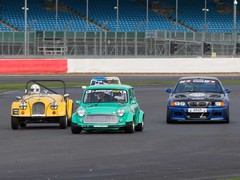 Diversity? Name of the game at the Birkett

What I can tell you is that the Birkett brings together a huge and diverse range of teams, cars and people to Silverstone for no reason other than to share a common passion for grassroots motorsport. Whether you compete Smart cars or 70s Camaros, turn up in your race car with your helmet and toolbox on the passenger seat or have a full factory support truck and team of mechanics (that will have been us then) the unifying force is a passion for competition and putting on a show.

The racing certainly does that too. Where else are you going to get a stripped and caged Saxo put together on a shoestring sharing a corner with a (literally) fire breathing Porsche 935? Even reading the programme was entertaining, gasping at the range of cars and chuckling at some of the team names - special mention to Shake And Bake, The Blat Pack, Not Fast But Furious, Cliff & Richard's Young Ones, Drive It Like You Stole It and more. A bustling paddock, friendly sense of cooperation within crowded garages and distinctively British sense of eccentricity all added to the flavour, all topped off with some fabulous cars and hard racing out on the track. Even if nobody actually has a clue who they're actually competing with for position until the numbers are crunched afterwards.

The sun even came out for race day!

The drying track still had some greasy patches at the 11:45am start, as many found to their cost with cars flying off left right and centre. An indication of the speed differential on the grid was obvious when the leading Radicals were nibbling at the heels of tail enders within a lap and from there it was pure racing anarchy. We started on wets, team driver Mark Ticehurst into the 2min 39s - a small matter of 25 seconds better than I managed in the wet the previous day. Gulp. We opted to go and spectate from Stowe for a bit, driving round and watching fellow team driver Owen Mildenhall up the pace further before double waved yellows appeared at Club and we decided to drive back to the pits. As we passed the end of the wing we glanced across to see ... a three-wheeled Mazda going onto the back of a flatbed and Owen tramping across the gravel. Oh. Just then the other car passed, the relay system meaning we were still in the race but a heartbroken Owen revealing the wheel hub had failed, pitching him into the gravel. A lift back to the paddock was small consolation. 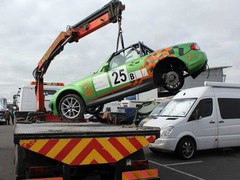 Back in the pits the Jota boys wasted no time at all, setting at a civilian MX-5 parked next to the truck (I'm assuming it was something to do with us and not just parked there by some unsuspecting member of the public!) with jacks and spanners, ripping out its hub and driveshaft and swapping them into 'my' car in what seemed like minutes. Amazing stuff - at one point there were five people under the race car with a chorus of ratchet spanners going like crazy as they put it all back together for my stint. Time to suit up and get ready to go out. Frustratingly this ended up being behind the safety car for what seemed like an absolute age, despite there being no obvious cause. I was getting frustrated. Then a green flag and we were off again.

In the previous blog I likened it to being on the M25 in rush hour and, frankly, the analogy stuck. Looking ahead you're thinking 'right, I'll be able to out-brake that M3 but that Caterham on his inside will probably have the corner but there's a Radical coming up the outside that'll have us all and - oops, where the hell did that come from...' Repeat for every corner and you have an idea. 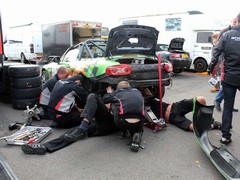 Turns out you can get quicker than a Kwikfit fitter

I had an amusing ding-dong with a very rapid Dolomite Sprint, got smoked by an old Tuscan racer and then got totally mugged into Copse by a BMW of some sort, my panic pitching me into a spin that thankfully didn't end in the gravel. I saw one big crash, an open top car go up in flames with the driver sprinting away across the gravel and spins galore and before long the safety car was out again to sweep up the mess. Back in the pits I was christened 'safety car Dan' and promised the final stint to make up for it, which was very generous of the team.

By the time I got back in the car the autumnal sun was low, the track dry and attrition had weeded out the hapless and unfortunate. Meaning, basically, everyone left was flying and I was being overtaken all the time, despite getting down into the 2min 37s and seeing a '36. Still three seconds off Ticehurst's best but I was happy with that, the Mazda possessed of great brakes and superb corner speed but rather lacking in power on the way out. The job of squeezing every last mph out of the little thing was all consuming, tiny errors in corners having huge knock-on effects on the straights. A great challenge though, the car feeling great even with its donated rear suspension. 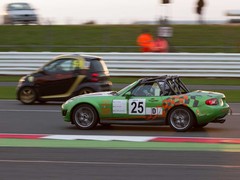 I got so lost in the zone I was battling for position with a BMW Compact into Woodcote and didn't even see the chequered flag, only realising it was over when I caught up with a load of Caterhams with drivers waving at the marshals! Pulling into a pitlane lined with mechanics and supporters from all teams applauding every car was a touching end to the event, mutual respect to all finishers entirely befitting the traditions of the this most eccentric race.

A shame to end on a downbeat note then. To a family lunch the following day I was greeted by an ashen faced father-in-law with news that a neighbour was in a critical condition after crashing his car at Silverstone. This, it turned out, was the driver of the Radical that went off in front of teammate James Mills after connecting with a BMW and prompting the safety car period I ended up in. A sobering end to what was otherwise a fabulous celebration of the breadth and passion of all those involved in British motorsport - our best wishes to the driver involved and his family.

Dan has a scrap with a V8 MG