When this is the sensible daily hack in your fleet you know you've got it bad... 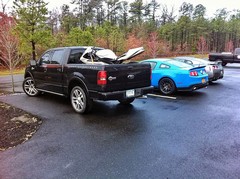 Why I bought it:
"Being British and moving to NYC when I was 23 I'd grown up with small displacement hot hatches. Having a somehow managed to assemble a fleet of cars in various states of repair I bought an F-150 Harley Davidson Edition from Texas. Love affair with pick-ups started there. Long story short I worked back in UK for a year and sold it. When I got back to America the first thing I did was decide to buy a another pick-up truck for the track towing and parts hauling purposes. Being a total idiot I moved swiftly from a base F-150 to a Hennessey tuned Raptor." [Check out Hennessey's customer car gallery for further inspiration...] 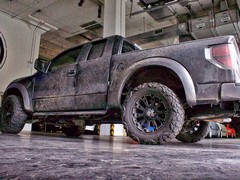 What I wish I'd known:

"I think the main mistake I made was going with one with giant rims/off-road tires. They look great and enable spontaneous forays into mud and gravel filled messes but on the road they are a) noisy (think WWII kamikaze dive bombing sound) and b) make the car do massive understeer skips when you hit uneven road sections on corners. Terrifying."

Things I love:
"I love the engine sound. Impossible to describe really. Having locking diffs and switchable two- and four-wheel drive is amazing. When driving it back from Texas the most amusing thing was to be travelling down some empty country road somewhere in Tennessee and, at 70mph, be able to just decide to drive through the adjacent field instead. Then, when time to get back on the road, do so by driving up the bank and flying six feet in the air before bouncing back onto the tarmac. It's also super easy to self maintain. I almost forgot suicide doors too ... so many boxes ticked." 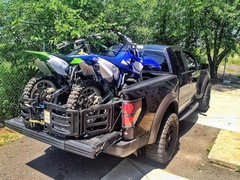 Could you get any more boys' toys than that?

"After I got it I took it to my local Ford dealership to have them look it over. Big mistake. They sucked. Not the truck's fault really. The front seats are really poor material quality and are now really showing wear. Small gripe."

Where I've been:
"Driving home from Texas was a blast. Driving through Manhattan in a foot of snow is always hilarious. Any time it rains turning off traction control makes every journey an adventure." 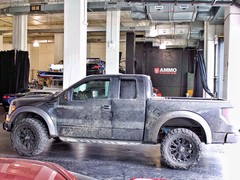 "Too busy with other projects to do too much to an already great car. In the back of my mind I want to do a manual conversion but that's a few years away."