This PHer wanted a fun car to replace his Impreza; you could say he's quite pleased with his purchase... 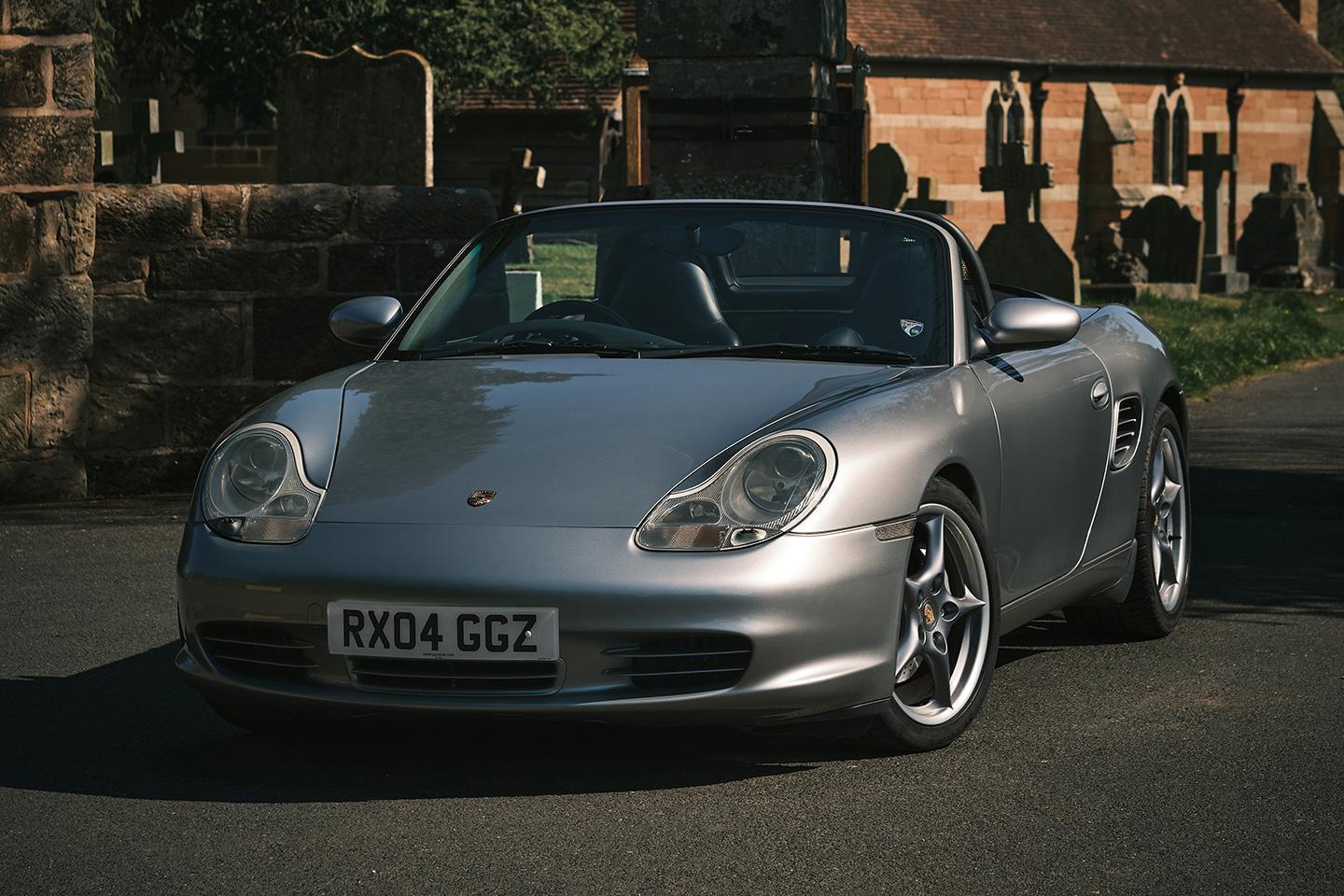 Why I bought it:
"I was on the hunt for a fun second car. I had owned a string of five Subarus in the hunt for the perfect all-rounder and the STI hatchback came pretty close, but driving it to work on the motorway day in, day out just seemed wrong; so, I bought a diesel mile muncher and the Scooby became a fun car. The trouble was, it just stopped being as much fun once it became a second car. It was just too powerful, which probably seems crazy as it only had 330hp and that's not a lot these days. It was ballistic, though, being a Prodrive car, and there were very few opportunities to really drive it as it should have been. And, as standard, it was not ­well suited to being used on a track. Rather than give it a diet, I put it on the market and started the search for a different type of car. I had some non-negotiables and that narrowed the field.

"Firstly, with our turbocharged present and electric future firmly established, I wanted natural aspiration and at least six cylinders. I wanted a really characterful powertrain that would make every journey special; turns out that's difficult to find when you also want rear-wheel drive and a manual... On top of that, I wanted it to have a classic feel but without being ancient and unreliable and I wanted it to have the X factor but didn't want it to cost the earth like most cars with that certain something tend to. Finally, if possible, I wanted it to be a convertible, as I'd never owned one and it looked like fun. Truth be told, once the budget constraints were in place there were not many options (!). Obviously the four-cylinder sports car options were straight out, as were the drop-top Mercs and Jags. Cheaper Maseratis and 911s were considered, but even at almost £20k it seemed only ropey examples were around, and nothing seemed to have the X factor thing I was after. Neither did Boxsters, to be brutally honest, but at least the budget meant a whole host of them were available. So, I started giving them a proper look...

"I knew instantly that it had to be a 986. They're now almost classics, yet from that period of the late 1990s and early 2000s when so many greats were launched. Also, due to my age the first gen one with the lights everyone hates is the Boxster look of my childhood and I really do love it.

"I was still lamenting the lack of X factor when I stumbled on the 50 Jahre 550 anniversary edition and knew I had found exactly what I was after. It just looked right. I quickly learnt that it had GT Silver paint that was not available on other 986s. It had two tone lightweight Carrera alloys unique to the model with 5mm spacers and M030 suspension, dropping the car by 10mm. This explained why it just grabbed me instantly, but I went on to learn about a whole host of minor changes that make it a very different car. It is certainly more than just a plaque, although it does have a numbered one. It has the air intake from the 987 Boxster and a unique double stacked exhaust that an extra 6hp, which may not seem like much, but it seems to add something much more and definitely turns up the soundtrack. Inside it has every option box ticked, but also has body coloured trim, a unique aluminium gear knob and chrome ringed dials that just add a little something to the cabin and echo the 550 Spyder it was created to honour.

"All of this creates a special feeling without breaking the bank. I managed to find one for sale with a lovely couple, who sent me videos of every request to the extent that I could buy it without seeing it due to the lockdown. Once I did see it, I knew I had made the right choice and I haven't shut up about it since."

What I wish I'd known:
"Cliche alert: I wish I'd known just how good it is. I expected it to be nice, but I never expected it to blow me away like it has. I keep on saying 'balance' the word to sum it up. Not just the balance of the chassis, but how its relative position in the modern world means that it now has just the right amount of power to have fun on real roads. It is pretty grippy, but you can wag the tail any time you like. It's light, but still feels solid. It feels like a classic, but it is easy to use. Above all else, it is just so much fun; I cannot stop driving and I really hadn't intended on putting so many miles on it. I have had to accept that any notion of keeping it nice and selling for a profit in 10 years is out of the window. It will now be used constantly and never sold."

Things I love:
"There are so many things that I love I could just say everything, but there are some stand outs. First off is the paint. It was created for the Carrera GT, and it really is a supercar paint job. I keep mine in good order and it just gleams in a way very little else does. I love the looks. I just go out and stare at it for a while sometimes. I feel a lot of modern cars trade beauty for presence, and I prefer a little more elegance. Some say it looks the same from the front or the back, but remember racecar is the same spelled backwards or forwards as well. There is a subtlety and simplicity to the lines that linger and it's a shape that just keeps growing on me. I think it has aged very gracefully and it is really coming into its own.

"You'd probably expect to find this in the 'Things I hate' section to follow, but I love the IMS bearing issues and it's pretty obvious why: depreciation. The 3.2 litre engine in the S was originally meant to be the launch engine for the 911 until they decided to go with a 3.4, so you are getting a 911 engine with the whole front end of a 911, interior of a 911, gearbox of a 911 and a chassis that is better balanced. To be able to get a Boxster S right now for £8,000 in very good condition and then change the clutch and IMS bearing for £1,500 makes it the bargain of the century for less than £10k. When you consider that the anniversary editions were generally looked after a little better and did fewer miles means the extra outlay is usually worth it, before even thinking about all the extra you're getting.

"I have come from a 2.5 STI and those flat fours were regarded by the internet as chocolate engines to stay away from. Buy a nice JDM import one instead they'll tell you. I chose to ignore this as the price was favourable and I was experienced with Subarus at that point. Things could have gone wrong, but I theorised that a little mechanical sympathy and regular servicing would get me through - and it did. During my four years of ownership, it cost less than any car I had owned before it. The car I had before it was a 2.0-litre import, the bottom end went and I forked out for a full rebuild, so my advice is stay away from those chocolate import engines! Needless to say, there are horror stories surrounding many cars as they are complicated beasts, but if you talk to an actual specialist about these IMS issues they will generally put your mind a rest. It saddens me to think of how many people could have been enjoying a Boxster but aren't because of something they read on the internet.

"Probably the best thing is the sound. Once on the second cam profile it just screams to the redline with a proper howl that is addictive. There are better sounding cars, many from Porsche, but it must be right up there. I was surprised when I took my best mate for a spin who has a DB9 and suggested it was probably nothing compared to his V12 soundtrack. He said he was a little disappointed with the Aston noise and he was surprised a Boxster could sound like that, which I wasn't expecting. It has got a beautiful voice, and that's the thing I love the most."

Things I hate:
"I don't mind the hairdresser's car thing, as I trust my hairdresser with my style regularly and they always get it right. I don't even mind the poor man's Porsche jibes, either. I do hate the idea that some people consider it not to be a proper Porsche. It is so closely related to the 911 of the same era that they are almost the same car, and with so many Porsches over the years having quite some VW influence, it's a little odd it even got tarred with that brush. Thankfully, this does seem to be changing and I think the existence of the Boxster and its part in saving the brand means it gets a little more love these days. Additionally, although I have rather enjoyed methodically treating every squeak and creak in the interior to get it silent, there is one that I just can't solve. I hate that particular squeak; there, I said it."

Costs:
"In terms of running it, the tax and insurance is less than my STI and it uses less fuel, so I'm pretty happy from that perspective. I have had to get the headlight washers changed and the fitted price of £400 was not too bad, but the parts were over £300 of that for little bits of plastic, so I am wary of the Porsche tax. I have bought some nice new wheels bolts as well as the originals were a little worse for wear so that was another £200, and I am going to change the centre caps shortly for about the same. The reverse light microswitch has failed which will be seen to at the next service, but other than that it is in fine fettle and feeling good. Naturally I'm expecting having written that that everything is going to fail now and should that happen, I'll update in the comments."

Where I've been:
"Sadly, due to buying during the Covid situation I have not had the option to do a great deal. I was able to take a little trip to Broadway in the Cotswolds and have a pub lunch in December, but other than that it has just become a part time commuter when the sun is out and the less-than-direct route is calling."

What's next: "I have joined the Porsche Club of Great Britain, which it turns out had its first ever meeting in my hometown 60 years ago. I will likely start taking part in some of their organised activities once things are back to normal. I am certainly looking forward to my first track day, but whenever and wherever I can drive it, it always manages to make my day - I hope that continues for a good long while."

Want to share your car with PHers? Email us! Drop a line to carpool@pistonheads.com - we look forward to hearing from you!