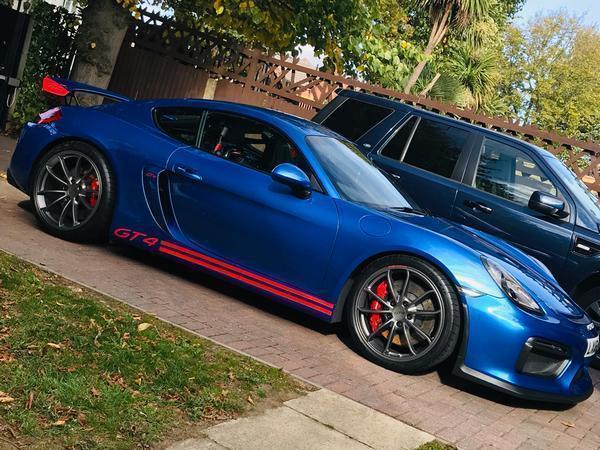 Why I bought it:
"A simple answer: this won evo Car of the Year in 2015, beating astonishingly powerful competition like the sublime GT3 RS and mesmerising McLaren 675 LT. If ever there was a David vs. Goliath victory (relatively speaking), this was it!

"I always liked the idea of a compact mid-engined Porsche, and drove an early Cayman S many years ago. I recall that the handling was great but it felt a little underpowered. And ultimately, image-wise, it could still be unfairly considered by the uninitiated as the poor man's 911.

"Fast forward nearly 10 years, and as a last swansong of the naturally-aspirated Cayman, the GT4 emerges. By the time I realised there was such a thing as a GT4 and made the desperate call to Porsche, the entire allocation had been sold out. And then, completely out of the blue, in early 2016 I received a call from my local dealer, Porsche East London, informing me that I had been allocated a slot from the second build wave and that my car, if I decided to put down a deposit, would be due for delivery in March! I was stunned. I am ashamed to admit it but I shed a tear or two."

What I wish I'd known:
"This was the first Porsche I had bought new and the cost of the must-have options was a bit of a shock.

"I find it very difficult to find any faults with the actual car, though. Not surprising perhaps, as it has received such unabashed adulation from the motoring press.

"However, after nearly three years of ownership, I have come to the conclusion that perhaps the GT4 could do with a little more power. It can't really catapult down the straights like a 911 GT3, but then I suppose that rather has to be the point."

Things I love:
"I like the look of the standard Cayman but, festooned with wings and beefy bodykit, I love the look of the GT4. Even though it is a compact car, it does have road presence particularly in the Sapphire Blue paint job.

"The GT4 has that feeling of Germanic quality running through it; from the very moment you close the heavy doors and sit firmly ensconced in the 918 Spyder carbon bucket seats. You sit very upright but not in an uncomfortable way, more like you have been told not to slouch by your authoritarian school teacher! And if you are of average height you have to sit closer to the steering wheel than initially feels natural. The cabin is well built, perhaps a little claustrophobic, but with the various carbon fibre options, feels high quality. The stubby, Alcantara-clad gear lever is a tactile treat, ideal height and distance from the driver, and is effortless to engage. Undoubtedly, by far the best manual box I have ever experienced. After the monumentally heavy clutch of my 997.1 GT3, the GT4's clutch feels pretty user-friendly and shifting through the gears is a delight. The brakes are confidence inspiring (see below) and can be modulated very precisely to shave off just the right amount of speed to retain poise and balance in the corners.

"The GT4 is surprisingly loud as it starts up and goes through its warm-up cycle. The sound is purposeful; quite gruff and mechanical. More race car than exotic. The GT4 always feels compact and easy to manoeuvre, be it through towns or down country lanes. Lambos, in contrast, feel quite wide and the size generally holds me back from deploying the full ability. That is the beauty of the GT4; being relatively modestly powered at 385hp, you can make use of most of that power on your favourite roads so that you return from your Sunday morning blast with a deeper sense of satisfaction. With my Performante, it is always a case of 'what ifs?' - what if the road was that bit wider, that bit smoother, that bit longer - I could have deployed more of that Nurburgring-record-smashing performance!

"Yes, the gearing is too long in the GT4: in second the redline doesn't arrive until after the motorway speed limit! So you can't generally chase the revs as frequently as might want to, but so be it. The car is good on so many levels that you can forgive this weakness. Engage the sport button and switch on the sports exhaust and suddenly you have a much more serious sounding GT product. People do comment on how loud the GT4 is from factory, particularly at low revs. Keep that accelerator buried, windows down, and the sound climbs to a wonderful rasping howl that is raw motorsport. And once you hit 5,000rpm there is another delicious hit of power. I do love the sound and tunnel runs are sought out as an aural treat.

"Last but not least, the GT4 handles fantastically. Forget the tests of straight-line speed; instead hunt down your favourite country roads and let the car off its leash. The GT4 is incredibly well-balanced and as long as you drive smoothly, it will carry extraordinary speed through the corners regardless of camber and gradient changes, and to a large extent regardless of the quality of the road surface. I honestly think I can drive the GT4 as quick as the Performante down many of my local country roads, which on paper would seem ludicrous. There is an incredibly gifted driver who owns a GT4 and regularly uploads videos to YouTube of him chasing down and toying with much more powerful exotica on the Nurburgring. There is no doubt that in the hands of an expert, the pocket-rocket GT4 is a potent track day weapon."

Things I hate:
"I am honestly struggling here. If we are being very picky, I have a slight aversion towards the built in sat-nav, but isn't that why we have Google Maps on our phones?

"I ordered mine with the Clubsport package including the bright red Sabelt multi-point racing harnesses. The seat belts are still present and correct. However, if you do use the racing harness, the fasten-your-seatbelt alert chimes continuously. To preserve my sanity, I had to buy a separate seat belt buckle to fasten into the seat-belt holder when using the racing harness!

"There was no lifting-gear option for the GT4 and the chin spoiler is dreadfully low. A lot of care needs to be exercised on uneven terrain and sleeping policeman might as well be hillocks."

Costs:
"This is where the GT4 excels as an ownership prospect. After the first year, Porsche East London kindly invited me to take my GT4 for a complimentary check-up by their master technician. The service intervals are every two years and my one and only service to date has cost a few hundred pounds. The build quality is outstanding and it is quite possibly bomb-proof. If you also take into account the incredible residuals, there are few cars (if any) at this price point that can match the solid financial case for GT4 ownership (from new, at least). Even the new generation Cup tyres have much better longevity under normal road use and I have acres of tread left on all four.

"Road tax is £540 per annum. The tracker subscription is around £250 per annum and insurance for an ageing petrolhead like me is very reasonable."

Where I've been:
"With the purchase of a new Porsche you are usually given a complimentary trip to the excellent Porsche Centre at Silverstone to test-drive the equivalent model of your purchased car. The Centre's GT4 felt very capable round the short tracks and it was an unforgettable experience.

"Last month I took my own GT4 to the Centre and had an even more absorbing time. The Centre's instructors are excellent and the track is very safe. It felt good to extend the delicious handling of the GT4 in a safe environment. Trail-braking was particularly effective in the GT4 and kept the car much better balanced through the corners. Also impressive was the gut-wrenching, hit-a-brick-wall, 60-0 mph braking ability of the GT4. There were also some squeaky bottom opposite-lock moments on the low-friction surface; even scarier was the fact that the so-called traction/stability control (fully engaged) chastised me on only one run. Apparently we GT drivers do not like the purity of our driving experience being marred by obtrusive electronic Germanic nannying but, believe me, when I am going sideways feel free to nanny me as much as you like! The instructor told me rather sagely that the GT cars are only equipped with the very ancient versions of the Porsche traction and stability control!"

What next?
"The only cars that I would think of part exchanging the GT4 for are the 991.2 GT3 manual, or perhaps for the GT4 RS - if it happens. I have come to the conclusion that even after some lovely Ferraris and Lambos have come and gone, I should always - always - have a Porsche GT product in my garage. It is the ubiquitous bottle of ketchup in your fridge - goes well with everything, and you can't help but keep coming back for a drop more!"

Want to share your car with fellow PHers? Drop us a line on news@pistonheads.com