UK tarmac has been the undoing of many a fast Audi; Harris puts the new RS6 to the ultimate test

The two most inexplicable things in the motoring world are surely the inexorable rise of the electronic handbrake (have you ever met anyone who actually likes them?) and of course the mystifyingly variable results that flow from Audi's go-faster RS bunker. One day it produces a complete clunker, the next it is the purveyor of such genius you fear for its rivals. 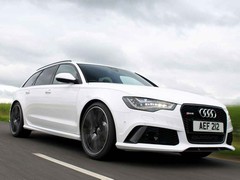 Big - everything about the RS6 is big

is the low-achiever of the range. Ever since 2001 this model has served to underline how much more is required of a very fast exec saloon or estate than simply adding a pair of turbochargers and rolling the wings. They were fast cars and, yes, many people loved owning them for their all-weather stealth and straight line speed. But they offered very little to enjoy behind the wheel and, worst of all, they tended to ride like a GP2 car.

And so, true to its completely erratic form, the new RS6 is now the pick of the RS range. I can't think of a more impressive model-to-model transformation in recent years than from C6 shape RS6 to the new C7. I made the unforgivable error of jumping into this car and assuming it would be the usual RS6 fare: shoddy steering, terrible ride comfort and Costa Concordia levels of understeer.

Business as usual?
When I collected the car the suspension was set to Dynamic, its firmest setting, so for the first few miles I thought Audi had outdone itself and produced the worst riding car available in the UK. But calming the dampers back to Comfort transformed its behavior. 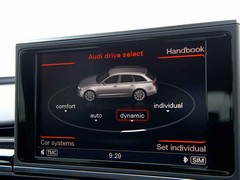 The low speed ride isn't S-Class smooth, and you're still aware of what's underneath you, but it takes the edges of anything but the very worst craters. It's a little more relaxing than the CLS63 Shooting Brake, and that's a revelation for an RS6.

Strangely, the DRC (Dynamic Ride Control) suspension with steel springs and dampers is an option in the UK, air suspension is standard. People say it's more supple on air, but after this experience I'd be very tempted to opt for the DRC and leave it in Comfort. The dampers are hydraulically connected diagonally, front-to-rear, a bit like the McLaren 12C. It works very well on UK roads.

A la mode
The steering takes some getting used to. I left it in the lightest Comfort setting because the Dynamic approach was too heavy and disconcerting for me. Like this there's no sense of connection to the road, but it's a fast rack and even in the softest mode the chassis can summon enough support to respond to its commands. On a bumpy A-road the RS is compliant and, dare I say it, even rather good fun to hustle along. With the rear Sport Differential set to Dynamic (yes, there's a fair amount of configuring to do here) the RS6 never feels rear driven, but neither does it have anything like the same sense of the centre of mass being somewhere three feet ahead of the front headlights - which is the set of dynamics its predecessor presented to the world. Grip from the vast 275-section 21-inch optional rubber is suitably silly 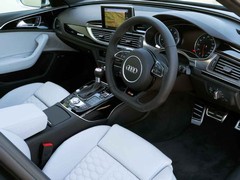 Business as usual in here - no bad thing

The new twin-turbo V8 is lighter and less powerful than the old V10. The only thing existing C6 owners will miss is some noise. Like the M5, this motor squeezes its blowers in between the engine's vee, and the Audi also runs cylinder deactivation at low loads - not a perfect musical platform. At times its sounds a little fake, but combined with the exceptional ZF eight-speed auto, the RS6 demolishes its predecessor for thrust and response.

Knuckle dragger
This is a brutal powertrain that finally takes the game straight to M and AMG. With 560hp and 516lb ft, it loses out on a few key numbers to both brands, but with eight forward ratios there's no wastage. This 1,935kg wagon (unladen) will nail all of its rivals in a straight line. Ours went under four seconds to 60 and well under nine to 100mph. And it just keeps pulling. I have to assume that the press car was fitted with the optional 189mph 'limiter' because it was still steaming forwards at an indicated 180mph. Perfect for that quick blast from Calais to Zermatt. 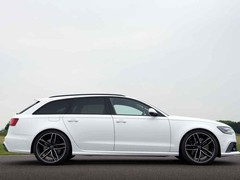 The lurking danger for any rival of Audi RS products has always been the showroom attraction of the base Audi product it is based on. The C7 A6 Avant is a seriously attractive car in 2.0 TDi form, adding wider arches and a heap of aggression to the front styling has resulted in something so good looking (to my eyes) that you'd probably live with a few dynamic faults. Same with the cabin, which is typically Audi-brilliant but for a few cheap plastics where you might expect something a little smarter given Audi wants £76,985, before you've attacked the extras column. But there is no longer any need to make allowances for the way the RS6 drives.

No excuses
Audi is shouting loudly about improved fuel economy. Admittedly its predecessor made Freddie Flintoff appear parsimonious, but all this talk of 28.8mpg on the combined cycle is nonsense. A normal day's driving gave around 19.5mpg, running faster - something you will inevitably do in this car - returned 17.5mpg. The cost of the fossil juice will be immaterial to those who can afford the car, the potential range given the 75-litre tank may be more of an issue. By way of comparison, I regularly see 25mpg in the CLS63. 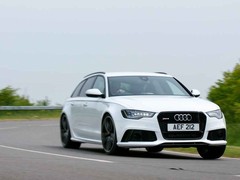 RS Audi in willingness to turn in shocker!

The RS6 wont carry as much clobber as

, or even a '63 Shooting Brake, but it is a mighty desirable machine. It more than makes up for

- in fact its supple ride and vast, accessible performance are just what the smaller machine would need to be a more enjoyable road car. I should probably add that the front seats are very, very good too.

Close relations
What does the RS6 do badly? The brake pedal isn't the most reassuring, and they can be grabby at low speed. Also, the gearbox calibration in normal automatic mode can be a little slow-witted when you want to overtake when the car is dawdling along using just four cylinders. Leave it in Sport and it flies the moment you look at the right pedal. I also find some of the ergonomics baffling on these new Audis, but after a week I didn't really give that a second thought.

Which brings us back to the way Audi RS develops its cars - and more specifically the engineering teams behind each separate model. They must be just that: completely separate groups. This car is touched with a genius glaringly missing in the RS4. Whereas it is possible to trace a core DNA through the other German high performance brands, I can find nothing in common here with any other RS model, and that is the highest praise I can bestow upon the RS6.

Here's hoping this is the start of a range of cars that follow in its footsteps.

Watch out for a head-to-head video against an AMG product soon...