A supercar that makes sense every day? Very nearly...

Alright, I have a slight confession to make: there's not much of the McLaren's mileage allowance left. And still another report to file after this one. Whoops. But if you were given access to one of the best supercars of the moment in the summer months you wouldn't worry about miles covered, would you? And there's more than enough to talk about, trust me... 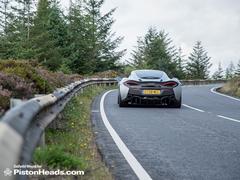 We'll deal with the bad stuff - and there certainly are some gripes - in the emotional farewell next month; for now, however, I'd like to tell you what a mostly fabulous car the 570GT is to use on a regular basis.

Having wrestled the keys from Dan with only about 1,200 miles left, I had to be careful about how often the car was used. Hearts will bleed, I'm sure. Despite that, when a c. 350-mile journey to Wales and back was proposed it wasn't to be refused - the miles had to go at some point, after all.

It was the perfect demonstration of the McLaren's abilities, and a brilliant journey to get to know the car. Driving out of London it drew all manner of positive attention, from school kids to grandparents, and when the traffic snarled up on the M4 it was excellent: plenty of light comes in through the roof, the B&W stereo is fantastic and the tan leather makes the car feel all the more exotic. Yes, we really were stationary for quite a while. 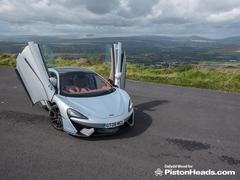 When the M4 finally moved, the McLaren sat at a quiet cruise (as long as I avoided the cat's eyes) returning nearly 30mpg in great comfort. Even the indicators were nice to use, the slender titanium stalks having a really satisfying weight to them. The GT's additional luggage space also meant there was space in the front to stop off for beer en route...

On some more interesting roads the next day - specifically the A470 and A4059 through the Brecon Beacons - the car was even better. Of course it's ballistically quick if you want it to be, but immensely satisfying at any speed because of how well sorted every control is. Just using the throttle, brakes and steering is enjoyable because of how nicely calibrated they are. The P Zero Corsas give the front end an additional edge, enough of one in fact that I'd probably spec a GT with them again. Combined with the low scuttle that's become a McLaren trademark, the GT is a very easy car to place and a lovely car to drive. It was a brilliant weekend. 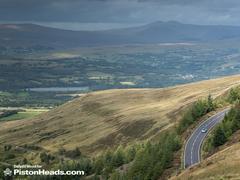 Moreover, the car is fabulous on normal journeys too, helping to justify the cost to an extent and offering a perfect riposte to those who say you can't use supercars in the UK. Sure, it's a big car for some parking spaces, but the quality of the materials, sense of huge latent performance, and public reaction are always enjoyable. And I love the doors.

So yes, despite worrying that there probably wouldn't be opportunity to fully explore such a car, the very opposite has been true. I don't want to stop using it in fact, but I have to; that will be a sad day, but more on that next time...

Previous updates:
The joy of specs
Taking delivery
570 GT videoblog
Enjoying the new supercar smell
It's no track car... but it's pretty good on track!
Off to the dealer to sort a few squeaks and rattles
Is it time to try the option tyre? Of Corsa!