Why have one wedding car when four will do?

That I'm a big fan of my Eunos won't come as especially shocking news to you. But I'm not the only one in the family, as the lead picture reveals. Yes, that's the Trent clan out for a drive - four brothers, four Mazdas, a whole of fun. 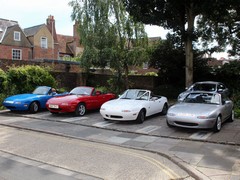 Of course the white one was getting the ribbons

Now, an MX-5/Eunos wouldn't seem the most useful of wedding cars there being a distinct lack of seating for bride, groom and driver and the whole wind-in-the-hair thing apparently not especially compatible with fancy wedding hairdos. But as any poor lady unfortunate enough to marry into the Trent family soon discovers we're a bunch of stubborn gits who'll drive about with the roof down until there are icicles coming out of our noses and we can't actually blink it's so cold.

Just as well brother number two (blue car) chose a summer wedding then. Brother number four doesn't actually own his own MX-5 - yet - but thankfully Rotechniks where brother number three (white car) gets his serviced kindly offered up its red courtesy car to complete the set and have a patriotically flavoured red, white and blue theme particularly appropriate given the groom's membership of the armed forces. Thanks guys! 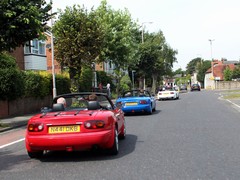 Meep-meep, the Trents are coming!

The Trents are in town

So there we were, four brothers, four Mazdas and a very jolly day involving only minor hairdo trauma and a fabulously noisy and overexcitable drive from the registry office in Chichester and along some appropriately twisty Hampshire back roads. On the way we passed a more conventionally equipped wedding party in a Bentley who quite literally turned their noses up at the sight of our little convoy. No matter, we were having more fun.

A diminished party enjoyed another fun drive home the following day and it was nice to get out in the Eunos after a bit of inactivity over the last few weeks. And though it scrubbed up nicely there are a few character features I really must address, the battery leads' unwillingness to stay attached and a bit of a bodged earth among them. It also looks like my undertray needs a bit of attention - well, replacing - and I must, must, must get round to swapping back to the 14s. 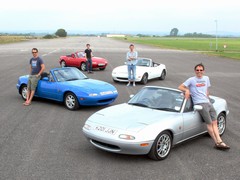 Is it nature or nurture to blame for this?

Money where your mouth is

I'm a total hypocrite on this matter too. I'll blather on about how over-wheeling has

. And then bling up my own car, ruin the ride and destroy the balance in the name of running some flashy looking rims. The OZs do look gorgeous. But they thump and clatter into hard-edged bumps my brothers' cars on their 14s simply glide over. And the innocent low-speed skidding is gone too. Curse my vanity!

So if there's anyone out there with a single 14-inch 'daisy' wheel out there taking up space let me know. One of mine is badly dinged and this is the main reason I haven't put them back on. 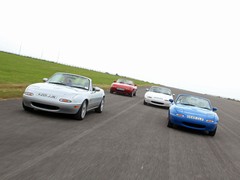 . Exhaust noise - and there's lots of it on my car - is for show-offs. Induction noise is much classier. But I must be sensible...

Previous reports:
Look, I was kidding about the downforce, right?
The Eunos returns to Scotland for another road trip
Has Dan killed his Eunos?
Snowed-in Eunos gets a mini facelift
Taxed, insured, MOT'd, re-tyred - it's been an expensive month
Eunos gets a loud exhaust and new suspension
New suspension offered but am I worthy?
Purchase price only half the story...
Open Season heralds rare 'money where mouth is' moment...