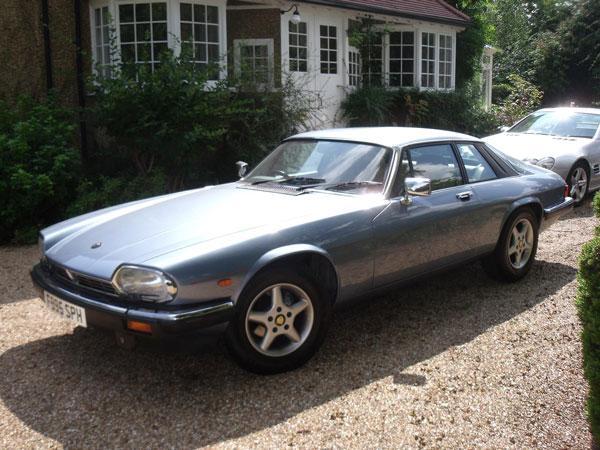 Sometimes choosing our Brave Pill leads to the sort of passionate office debates that get stationery thrown, desks dented and create the sort of trans-generational blood feuds that our grandchildren will still be fighting in years to come. On other occasions there's a worrying lack of inspiration as the deadline approaches, a situation solved more than once by judicious use of the Classifieds' excellent search function. This week's Pill has been brought to you by selecting V12 and then sorting by price ascending.

The resulting XJ-S isn't the cheapest currently listed, but has been selected for what seems the most compelling combination of price and condition. It also serves as elegant proof that, as has been the case for at least three decades, the XJ-S remains the most affordable way to experience the enhanced levels of risk and reward that come from a dozen cylinders.

While values have been rising for years, the XJ-S remains far cheaper than even the shabbiest examples of the E-Type it replaced, and much less expensive than most of the distinctly less well-cylindered alternatives from the same era. It's not long since unloved examples of both the XJ-S and its saloon sisters were priced low enough to be popular prey for the banger racing fraternity, something that led to the spectacular deaths of many.

Indeed, it's barely a decade since a former colleague bought a bargain XJ-S for a magazine feature intended to prove it was possible to go 150mph for £150. He almost managed it, being somewhere past 140mph when the engine failed spectacularly on Bruntingthorpe's two-mile runway; unfortunately during what was meant to be a sighting run and before any pictures had been taken. Those days are behind us, but this is still a smart-looking example of a V12-powered modern classic for less than five figures.

The XJ-S was big news when it first came out, although not always for the right reasons. It effectively replaced the pensionable E-Type, sitting on the same platform as the XJ saloon but with a two-plus-two layout and a long, low shape that was largely the result of work done by Jaguar's legendary aerodynamicist Malcolm Sayer prior to his death in 1970. Power came from a reworked version of the E-Type's mighty V12, with Autocar running a manual gearbox version from 0-60mph in 6.9-seconds and on to a top speed of 153mph. That was pretty much supercar performance - and 18mph faster than the then range-topping Mercedes SLC 450 could manage from its fweeble V8.

Styling was controversial. Even in 1975 Jaguar had plenty of traditionalists who disliked the move to oval headlights and were particularly scornful about the 'flying buttresses' which ran from the roof to the back of the car - and were vital to the aerodynamic performance. Perhaps fittingly, given the era it was born into, these also make the XJ-S look slightly like it is rocking a pair of heavily flared loon pants. The cabin's lack of wood trim also drew complaints from the Bufton-Tufton types who thought a Jag should be as well timbered as their mock Tudor houses; something that was rectified with later cars like our Pill.

Beyond its groovy design, the XJ-S had bigger problems. Most obviously being launched into the era of the Fuel Crisis, an inopportune time to be introducing a car that struggled to deliver more than 15 miles on a gently-driven gallon. More significantly, the fact it was being produced by British Leyland during the period of peak Bolshevism, when a bitter class struggle was being fought between unions and management. Strikes were frequent, build quality often terrible - and early owners soon discovered the XJ-S's position at the top of the corporate range didn't give it any greater resistance to rust than the company's lesser models.

Things improved over time. The Series II cars that arrived in 1981 were better finished and came with what was referred to, non-ironically, as the High Efficiency version of the V12 engine. This had a redesigned cylinder head to boost output to 295hp and cruising economy to the high teens, a six-cylinder version was also introduced. Beyond that the inelegant targa version was replaced by a much better looking full convertible in 1988 and, under Ford ownership, another substantial Series III facelift arrived in 1991, the XJS losing its hyphen and staying in production until 1996, being replaced - after 21 years - by the XK8.

My first memory of the XJ-S dates from the early 1980s, and being given a lift back from a friend's birthday party in one. I would have been about seven and this was definitely an era before obsessive consideration of occupant safety: there were four small boys crammed into the back and I was one of the lucky pair who got to share the front passenger seat. Our chauffeur spent much of the time driving one-handed because of the need to hold his burning cigarette in vague proximity to the pair of substantial his-and-hers ashtrays that sat on either side of the gear selector. My dad had a Morris Ital so this was off-the-scale posh, I still remember the engine's creamy soundtrack and squeal-inducing acceleration.

By modern standards the XJ-S won't feel particularly fast or dynamically focussed, but there will still be an abundance of waft and the V12 should still deliver solid urge with little apparent effort. The design hasn't aged as well as that of the E-Type, but I'm finding the seventies lines look better and better as time goes on; this relatively unadorned Series II more handsome than the smoothed-off Series III that followed.

Our Pill is being sold with an advert that seems determined to let its pictures do the talking, reporting minimal detail. The salient points being the fact the vendor has owned it for the last 24 years and that - to judge from both images and the MOT history - this one doesn't seem to have any of the rust that usually comes as standard on the non-galvanised earlier cars. Indeed, it looks like it's come from 1989 pretty much unblemished, with the history remarkably short on both advisories and miles; having wound on just 167 in the last decade, most of these were likely to and from the testing station.

There are still plenty of other areas to go wrong beyond corrosion, of course. The V12 needs regular fluid changes to stay healthy, timing chains can get rattly and there's an auxiliary air valve that often fails expensively. Automatic gearboxes can leak, suspension components don't like neglect and the brakes often suffer from seized callipers - four MOTs in a row reported a grabbing near-side brake before it turned into a fail. But if our Pill really is as rust-free as it seems to be then it looks ready for another 30 years. Try finding a more compelling V12 for less.

Search for a Jaguar XJ-S here