Can the updated TT make a splash in a sodden Great Britain? 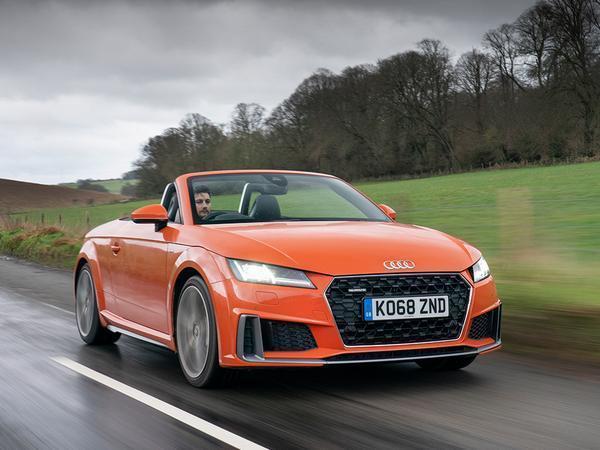 We haven't had a go in the 'regular' TT since it received a mid-life facelift last summer. At the time Matt headed off to sample the TT S Coupe on a closed road on the Isle of Man, where he basked in the sunshine, ate an ice cream on the beach, and generally had a lovely time (it's true - MB). Fast forward to a bleak, rainy February day in Berkshire, and here we have 'just' a 45 TFSI TT Roadster to further examine. Such is life.

As a mid-range S-Line model our test car is fitted with plenty of additional standard kit, including 19-inch wheels (over the entry-level 'Sport' model's 18-inch items), leather and Alcantara-clad Super Sports seats, an exterior styling pack and LED lights all round. That's on top of the base car's Virtual Cockpit and Cruise Control, though other options seen here, like the Technology Package and Bang & Olufsen sound system, will set you back further. This means that the TT Roadster's entry price of £31,215 finds itself raised to a rather costlier £39,155 before the door is opened, putting it squarely in the sights of BMW's new Z4.

Headline figures for this model are 245hp and 273lb ft of torque from the 2.0-litre four-cylinder engine, meaning 5.5 seconds to 62mph and a limited top speed of 155mph. Compared to the previous iteration that represents an increase in power of 15hp and a 0.1 second decrease in 0-62 time, this despite a 30kg increase in the Roadster's kerbweight. The S-Tronic transmission has also found another gear, now boasting seven versus the previous six.

To the road, then, where despite the weather there are some miles covered with the top dropped. Rude not to, right? Roof down motoring is, in fact, no problem; with the standard heated seats and Audi's £495 take on an Air Scarf cranked up to full, we're ready to go in perfect comfort, a theme which continues throughout the cabin. Some, a couple of my colleagues included, find the TT's cabin to be a little cramped, the driving position somewhat awkward. For more diminutively proportioned people such as myself, however, it's a lovely interior. Sitting low, it ensconces you in an environment of high quality contact points, crisp displays and good visibility. It's classic Audi.

Put your foot down and the TT does what all TTs do - it goes. Not with the speed of an S or the drama of an RS, of course, but still with enough gusto to get the job done. The EA888 engine has never been particularly characterful, and seems even less so in this application; same goes for feedback, with the steering and pedals being neither very communicative nor problematically muted. The chassis is compliant, though, ride quality is good and handling is sharp, with the TT Roadster eager to turn into a bend and, thanks to the magic of quattro, just as eager to haul you out again.

As it has been for quite some time, then, the TT is all very controlled, meaning that as a sports car it won't be to all tastes. It certainly doesn't offer the thrills of a GT86 or the engagement of a Boxster, nor does it feel as mature a proposition as that Z4. What it does provide, though, is an overwhelmingly competent way to enjoy a spirited drive, without necessarily possessing the ability, or requiring the effort, that can be the case in other cars. Those of an enthusiast bent may turn their noses up at such a proposition, but the truth is that sometimes a comfortable seat, a stable car and a bit of power under their right foot is all a person wants or needs.

Rumour has it that this could be the final generation of TT, with Audi supposedly set to replace the model with a four-door coupe a la the 2014 Sportback concept. Not everyone will miss it, if this is to be the case. Throughout its life the accusation has often been levelled that the TT is not a 'proper' driver's car, and if by that its critics mean that it never requires a driver to chase the revs, that its steering isn't particularly communicative or that its engine doesn't stir the soul, then they're right.

If, however, they're suggesting that the TT isn't a fun car to drive, that it can't quicken the pulse or put a smile on your face, then they're dead wrong. It's rare blend of intuitive design, accessible performance and sporting potential made it a success when it was launched, and continues to do so today. It'll be a real shame if this is the last we are to see of it in its current guise, but at least it'll be going out on a high.