It'll pretty much drive itself... but why miss out?

For purists, for people who became fond of BMW through touring cars, rear-wheel drive and straight-sixes, the introduction to the

will make rather uncomfortable listening. There's discussion of how BMW is now a tech company as much as car company, that this is the most connected car BMW has ever produced and, it feels like at least, only a token mention of that old 'Ultimate Driving Machine' adage. 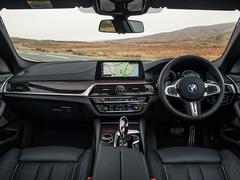 We'll get onto how a 520d 'Business Athlete' (BMW's own phrase) can get you a pizza ordered, find you a parking space and get you to that powerfully built company director meeting on time soon, but it's worth beginning with the positive news around the 5 Series as a sports saloon.

It most certainly is one, put simply; beyond the gesture control and the smart key and the remote parking - because it's now bigger than an E38 (Tomorrow Never Dies spec) 7 Series - this seventh-gen 5er remains a big exec that you can enjoy driving.

Opening argument
It starts the moment you get in, the seat able to be dropped low and the steering wheel pulled right out - it's a driving a position that's both fantastically comfortable yet also sets a sporting tone. The digital dials are clear and the dash is still angled slightly towards the driver; while the steering wheel remains too chubby in that odd BMW way, you're immediately in the right frame of mind for the business of driving and not just, well, business. 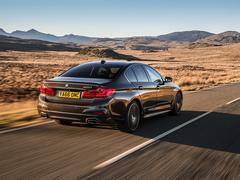 While the vast majority - a predicted 75-80 per cent, in fact - of UK 5 Series are expected to be 520ds, the bulk of driving time here was spent in the six-cylinder 530d. This is PH, after all; if the launch is diesel-only we're going for the fastest one! It's a great fit in the 5 Series, smooth and refined with plentiful performance and a gravelly straight six growl that is actually quite pleasant. It's paired to the familiar eight-speed auto which now uses the nav data to predict driving, holding gears when it's aware that corners are imminent and spookily accurate in its shift strategy. The full Adaptive mode as seen in

feels less successful simply because it believes brisker driving requires additional, artificial steering weight. Which it doesn't. And while paddles are standard fit, they're often left unused because the software is so intelligent.

The gearbox is worth additional mention in fact, as it's now the sole gearbox option across the range. Yes, the manual 5 Series is dead. A sad fact perhaps, although just 10 per cent of previous 520d customers kept the standard clutch 'n' stick combo. In the four-cylinder diesel the gearbox is a fraction less effective, kicking down sometimes frantically in search of performance where the larger engine would ride out the gear with its 162lb ft torque advantage. 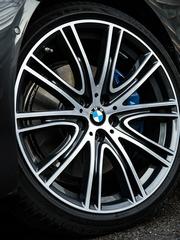 While the six-cylinder arguably feels the more natural fit, the 520d feels far less of a compromise against the 530 than a Mercedes-Benz E220d does to its six-cylinder E350d stablemate. Where the E-Class feels to lack a small bit of smoothness of mechanical refinement, the 520d is more hushed and feels a tad brisker too. Both are supreme on the motorway though; BMW is keen to point out a fractional drag advantage at 0.22Cd, but each delivers the sort of relaxing progress befitting of more expensive cars.

The old smoothy
On silky smooth Spanish mountain roads, the 5 Series really impresses and begins to eke ahead of the Mercedes. While there are a host of dynamic options - all test cars here had Variable Damper Control, which is above the standard and M Sport suspension, and can be had with electromechanical anti-roll control - it fundamentally feels like a very well engineered saloon. It steers better than an M3, precise and without the gloopiness that afflicts that car. There are still better electric systems out there, but the car can be placed with confidence. Even in the comfort damper mode the 5 Series never feels out of its depth, absorbing what imperfections can be found with resolute control and super compliance. Up it to Sport and you trade a bit of one for some of the other, but the compromise always feels very well struck. The testing miles in Wales have paid off. 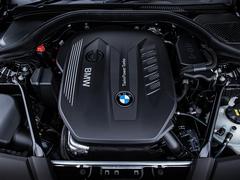 The reduced mass - now up to 100kg less than an equivalent F10 - feels to be kept low and central, direction changes are dealt with swiftly and authoritatively and you soon find yourself driving the 5 Series like a much smaller car. Enjoying it, too. It will be worth of course investigating which options work best for you - don't forget there's four-wheel steer available as well - but where the 5 Series was once a befuddling array of options that quite distinctly affected the car, this one feels to be inherently very well set up regardless of extras.

All the while of course you're sat in a sumptuous cabin, perhaps less luxurious than an E-Class but a compelling combination of technology, beautiful materials, space and comfort. There's a problem though, with the 530d at least: a lot of it is optional. Indeed the M Sport as tested was £66,150. And yes, BMW will still charge you for split-folding rear seats. Furthermore, options like the head-up display and comfort seats are part of far more expensive packages additionally comprised of stuff you probably wouldn't use. The seats, for example, are part of a £2,170 premium package that also features a powered boot, automatic four-zone air-con, an Ambient Air package and a 'ceramic finish for controls'. 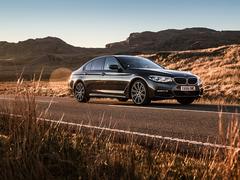 While discussing options, the suite of semi-autonomous tech should be mentioned. As most of it works only in an emergency situation little could be thoroughly tested, although the car did feel comfortable steering for itself on a motorway. That nothing named 'active' or 'assistant' or 'warning' interfered unduly is probably an encouraging sign for how well integrated they are. On this experience the 520d didn't feel like less of a car for not having them. Again, it probably comes down to personal taste.

For this car the BMW Connected app has taken another step forward, customers now able track their vehicle location, send an image of the parked car, sync Microsoft Office 365 and work calendars plus pre-set the heating for cold mornings. Some of that can be done from the optional smart key if you wish. It can even communicate with your smart home - that word again - to prep the house before you arrive. There's such a wealth of features that BMW now employees 'geniuses' to explain and set up the car's technology for customers. That's before we're onto the range of Concierge services, integrated into the voice control to give you access to an actual person who can provide parking options, reserve a restaurant table or get takeaway ordered if you're feeling less social. The list of features is vast, way more than can be explored in a day's driving, although it's worth noting the voice control didn't always respond flawlessly to requests; best to use the very good iDrive or slick touchscreen instead.

What's key to the 5 Series' appeal though is that beyond the carapace of technology, or a few features that feel to be there for the sake of it, lies a saloon of real engineering substance and some considerable style as well. It feels to combine the best of BMW's myriad talents, where a few previous efforts have only brought a couple to the party. More than that it immediately ranks with the E-Class, a car that felt to have brought the executive game on several steps just last year. If outright luxury is your priority then the E-Class just about remains the best; if you enjoy driving though, or have to have the four-cylinder diesel version, then the BMW is certainly the one to have - it's excellent.