The M3 shone in the sun of Portugal; does it still gleam in the gloom of a British winter? 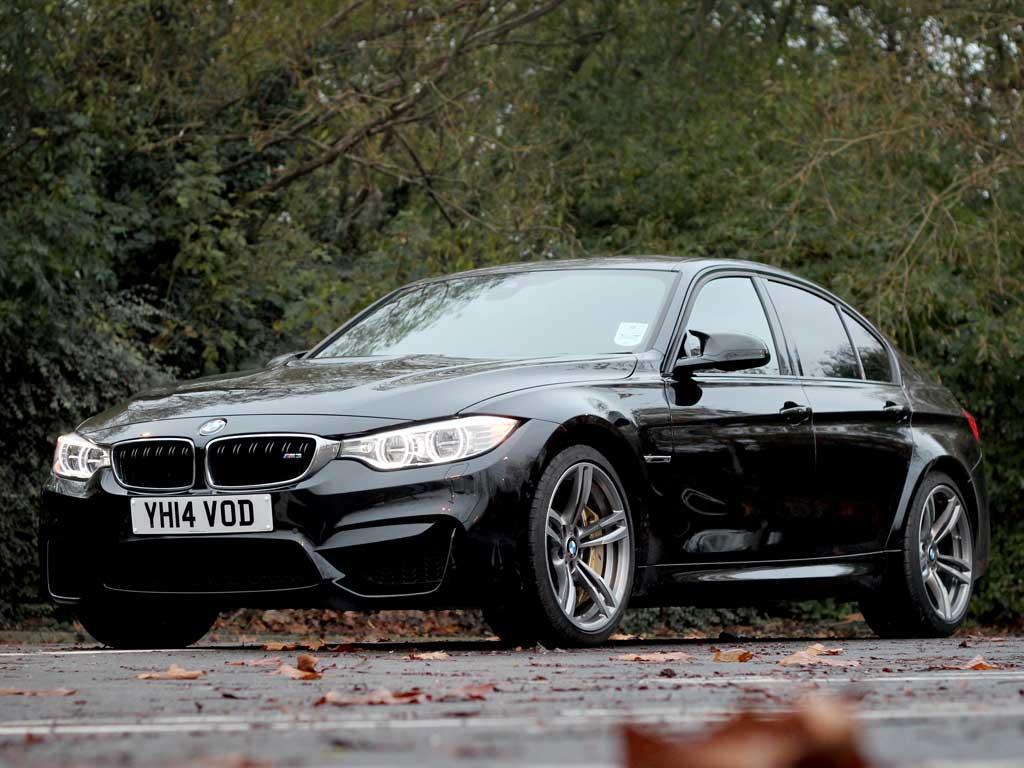 Clear Portuguese skies and Portimao circuit to play on for the BMW M3/M4 launch were always going to show a new M car in its most favourable light. And, accordingly, we returned from the trip gushing with praise, the taste of toasted Michelins still at the back of our throats. This time, however, the only laps are of the M25 and under the unremittingly grey skies of a British winter, as ever a tougher test.

Glowering in the PH car park in Black Sapphire metallic this M DCT equipped M3 certainly looks as moody as the skies above, this subtle shade and silver wheels commendably understated compared with the attention seeking Austin Yellows, Yas Marina Blues and Sakhir Oranges applied to launch cars. At least with the saloon on test we've got no M3/M4 confusion though. Four doors or not this is an M3. It says so on the back.

And proves what we suspected when the car was first shown; the saloon is possibly the cooler of the two. The transformation from 3 Series to M3 is more dramatic than it is from 4 Series to M4 for starters, the addition of the coupe's wider rear axle meaning a much more noticeable flare to the saloon's rear arches. The muscularity of this widebody look, the deep dishing on the wheels, the quad exhausts, carbon roof and the subtle bonnet bulge all combine with fabulous effect. Say what you like about the move to turbos and the rest - BMW has nailed the look.

That old launch drive caveat of 'of course, we'll have to see how it drives in the UK...' may have a ring of cliche about it but there's good reason for tempering giddy launch enthusiasm with a bit of home truth. Tyre smoking heroism is all very well but on the daily commute DAB and heated seats rapidly take greater precedence.

Much in the intervening period has been made of the character of M3's S55 turbo engine. Recent exposure to the 1 M Coupe present an interesting comparison too. Also twin turbo, the 1 M's engine was a tickled version of a regular BMW lump rather than a bespoke 'S' prefixed motor but, whisper it, perhaps a little more characterful.

It's a common thread in many new age turbo engines from German performance arms, many of whom have previously defined themselves with big capacity, high-revving and normally aspirated engines. Having established a loyal fanbase raised on this diet it's understandable that as downsizing and turbocharging are forced upon them they've attempted to replicate the feel of these traditional motors. And, like many, the S55 twin-turbo six seems determined to hide its forced aspiration. AMG has done the same thing with the twin-turbo 4.0-litre V8 in the GT (and soon for the M3 rivalling C63), aware that a vocal minority - us, basically - need to be placated.

The response has been entirely logical - use considerable skill, technology and innovation to disguise less desirable characteristics. Low inertia turbos, clever use of boost to keep them spinning off throttle, noise management, skilful mapping in consort with gearbox, stability control and chassis systems - the M3 uses all of this and more to try and fool you into thinking it's still normally aspirated. See the very interesting interviews on the BMW M page on engine noise and response for more from the engineers involved.

Technically the engine is a masterpiece and packed with fascinating engineering solutions. Functionally it does the numbers, with remarkable response, a willingness to rev not seen in 'civilian' BMW turbo sixes and a huge power band that sees peak torque of 406lb ft available from 1,850rpm to 5,500rpm and peak horsepower from 5,500rpm to 7,300rpm.

On the launch and quibbles like noise and low-rev response are clouded in tyre smoke. But in that accursed real world you focus less on the performance in extremis and more on the nuance, at which point the attempts to 'deturbo' the power delivery and replicate the performance of a high-powered normally aspirated engine are just that - fakery. Ungrateful swines that we are but the more crude 1 M with its slight lag and rushes of boost is actually more exciting to drive at road speeds and the S55 never quite comes across as convincing, especially aurally. Nor does it have that pent-up aggression of the best normally aspirated Ms like the E46 CSL or previous V8, both of which prickled the neck hairs at tickover.

It's the same with the variable ratio steering which never quite feels as natural and transparent as you might hope. But then nor was the E92's.

And it's these subjective characteristics - noise, steering feel, throttle response - that muffle the communication and exacerbate things like the traction issues a 431hp rear-driven saloon will inevitably experience on your typical winter road. The engineers have done superbly in mitigating the unsettling torque spikes but you see plenty of flashing yellow DSC light on even moderate throttle openings.

The active rear diff does a fantastic job of sending the power where it can be used most effectively and the stability control has everything in hand so the car never feels sketchy. But even in the dry you can feel it rationing out the power to keep the car under electronic control and there are times the M3 feels severely traction limited and a four-wheel drive hot hatch like (entirely random example...) a Golf R would be waltzing off into the fog.

But this is PH and, of course, powerfully built driving gods like us drive everywhere with the DSC off, right? There's certainly entertainment aplenty if you do and the M3 is happy to scribe exciting angles if you have the space, willingness and denial to indulge. Just don't expect it to always translate to forward motion.

One PH contributor picked the M3 and M4 as his biggest disappointments of 2014. The office isn't unanimous in that view and as a product it's a spectacular achievement. It looks fabulous. It goes like stink. It's desirable, comfortable, luxurious, pugnacious and expertly balances visual aggression with the ability to keep a relatively low profile in the company car park. The quality and extent of the M division's engineering is without question. It's as close as anyone has got to making a new-age turbo performance car with the sensations of a more traditional one yet keeping all the mod cons and returning (officially at least) mpg and CO2 that won't break the bank. And at the limit it's a magnificent thing. A common refrain these days but it's just a shame there's not more taste of that at everyday speeds.