Despite the indisputable step up in ability and performance that characterised the arrival of the E92 BMW M3, there are many enthusiasts that lament the passing of its straight-six engined predecessor. BMW has finally acknowledged there's a gaping hole in the M-car range, and that the gap should be filled with something 1 Series shaped. 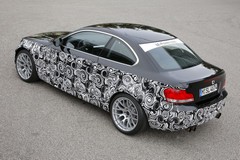 You'll have seen the images of the mildly camouflaged cars before now, and BMW has even released a few striptease-style photographs to start building momentum to a full reveal of its 1 Series M Coupé in December. Now some weeks ahead of the official launch they’ve let a few hacks loose with a pre-production car in Germany, including yours truly. Yes, this job can sometimes be fun…

It's going to be a looker, thanks in no small part to the deliciously bulbous wheelarches.  I think they're more reminiscent of the 2002 Turbo's than any modern M-car's, though they are also necessary to accommodate the current M3's rear axle. 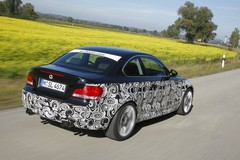 You can ignore the hand-made (i.e. bodged together) look of the arches on the test car, as the final version will feature a new one-piece metal body panel. One of the pre-production mules has an exhaust similar to the current 135i's - as opposed to the quad-pipe set-up of all modern M-cars - but it was confirmed that the finished product will have four outlets. And yes, 19-inch alloys will be standard - we're told that just one wheel size will be offered.

Christoph Smieskol, one of BMW's engineers responsible for the 1 Series M Coupé, tells us that the company took inspiration from the original M3 in the pursuit of a 'back to basics' approach. Without saying as much, he alluded to the fact that this is as likely to be in the name of keeping the price of the 1 M down. We're crossing our fingers for a showroom price of not much more than £40,000 - downsizing is going to be big in 2011. 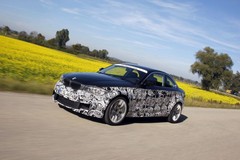 That means fewer toys than we've grown accustomed to in our M-cars. The M3's rear differential may be present, but it is unlikely to be offered with different settings. Same goes for the steering and suspension, which does without adaptive damping or any adjustment. The driver can choose between two different throttle maps and the usual multi-stage stability and traction control system, but that's pretty much it. While the 1 M will be sold in the US, no automatic option is planned, so it's the M3's six-speed manual gearbox for all. The 1 Series M Coupé should weigh about 1500kg, and to put that into perspective, it’s the weight of an average bloke less than the current M3 Coupé. Which is a good start, if not quite the featherweight we might have hoped for here on PH. 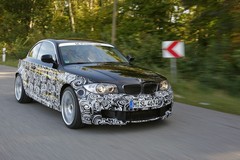 And any hopes for a high-revving naturally aspirated engine are quelled when the start button is pushed and the familiar straight-six rumble makes its way through the exhaust system. Under the bonnet is a reworked version of the twin-turbocharged 3.0-litre unit that powers the Z4 sDrive35is. BMW has yet to release official power and torque figures, but count on about 350hp and 340lb ft. That's a useful jump up from the 135i's 306hp and 295lb ft - and it's worth remembering that the M3's peak torque is no more than the 135i's.

From the outset it’s torque that defines the new car's performance. The straight-six yowl is accompanied by a relentless shove in the back, and pick-up from low revs is impressively strong. Thankfully, this car is louder than the quick (but a little too cultured for our liking) 135i. From standstill you're into third gear in what should be a five-second 0-62mph time. As in the M3, the gearchange is a tad springy, though it's satisfyingly mechanical and quick across the gate. 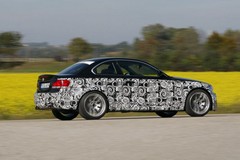 Only when you've gone up and down the gearbox a few times do you realise that there was never any danger of running into the rev limiter. The grunt tails off, making it more natural to change up and use the torque than eke out every last horsepower. While there's nothing quite like the thrill of a screaming, naturally aspirated engine, we must be realistic about the times we live in, and turbocharging offers the best balance of performance and economy.

As with the most memorable M-cars through the years, the engine does not steal the show: the 1 M's chassis is a gem. From the moment you get underway the car feels remarkably different to the 135i. The wide, low stance helps with that, but so too does a direct, well-weighted helm - there's even some feel through the thick leather bound rim. The same can be said for the brake pedal, which is firm, but easy to modulate. 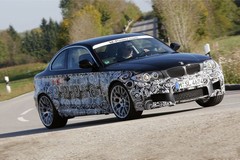 More impressive than the stopping power is the stability of the car under heavy braking, even while turning (oh the beauty of testing a high performance car on unfamiliar roads...). There is little in the way of pitch or wallow on the springs; the brakes just shed speed off - and there was little sign of fade after a good thrash through some fast German countryside.

Admittedly German road builders have no interest in challenging suspension engineers, so there were precious few bumps to contend with on our test route, but a couple of surprise mid-corner blemishes were shrugged off with ease, indicating that the 1 M was developed for a wide range of driving abilities and road conditions. 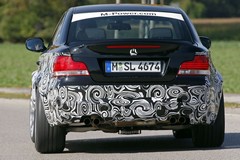 Pushing on further, the limited slip differential helps with traction and endows the car with a real rear-led balance under power. That the front end is so keyed-in helps with this. In short, it won't scare the uninitiated, but experienced drivers should find enough to interest them too.

To call the 1 Series M Coupé a true successor to the E30 M3 is stretching the point. Its relative simplicity owes a little to that car, but it owes a lot more to the economic environment we find ourselves in. The 1 Series should allow the M Division to continue to flourish, by introducing younger (and less financially endowed) buyers to the brand, but first impressions suggest that price alone won't be the only reason to opt for the 1 M.