24 hours (or so) with the run out F80 M3 - can it justify that extraordinary price tag? 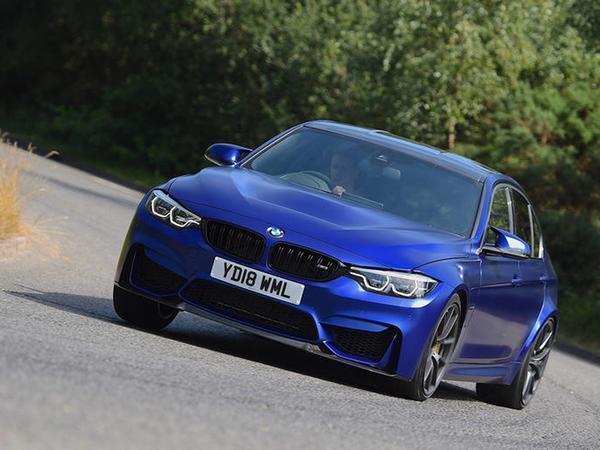 Really, the plan was simple: return from Aston DBS launch, get to Feltham, collect M3 CS, head to nearby Travelodge, drive as much of Wales as possible the next day. Because, let's face it, if you really liked F80 M3s (guilty) and someone said drive it for a day and write about it (thanks Nic), then what else would you do?

Even in the dark, even in Feltham and even when all you want is sleep, the CS grabs your attention. I love the DTM-style wheels (especially after the fussy Comp Pack items), the carbon accents, the gold calipers and the Alcantara where it should be inside. Nice.

There are certain things that always apply when driving any F80 M3, which most definitely still apply for the CS: getting the steering into Comfort mode ASAP and getting the powertrain out of Efficient are the most important. The few miles to the hotel pass without drama and like any other M3; nice seats, great wheel, pedals offset...

This isn't looking good. The Heathrow T5 Travelodge is absolutely jam packed and the car park unnervingly tight. Fabulous though the Frozen Dark Blue paint looks, I'd rather it stayed on the car and not the walls. A Leon driver applauds my "excellent driving" in getting out. There's still no parking. I want to go to bed. The M3 is abandoned out front.

There isn't a hotel room. Three of us have pre-paid rooms that have been given away, presumably on the assumption that we weren't going to turn up this late. Balls.

Now the fire alarm has gone off. Everyone is leaving the hotel in their pyjamas. I'm going home.

Crikey, I'd forgotten how much road noise these M3s generate. This is with a smaller wheel on the front, too, which feels to have helped the steering. But not the noise. Wales is definitely off for the morning.

Is this really making just the 460hp? Perhaps I'm just weary, perhaps there's more weight gone than is admitted, but this CS is seriously potent. Really revs, too.

Right, let's try again. Bloody Travelodge. Plan is Silverstone via the Dream Drive route to see whether this CS really is the making of the M3, then to Alpina Sytner at Nottingham. Why? Because there's something special there that I want to see; another very rare, very fast car based on a 3 Series. But that's for later...

I'm knackered; this is going to be a long day. I pull up the wrong side of the petrol pump. The cup holder is too big for the coffee. People are looking. Why do these stupid M cars always reset the drive modes?!

You know that south-western bit of the M25, where the surface is just terrible? The M3 does not like it. Every crack in the concrete resonates through the car, almost like BMW and surface are working together as an instrument of frustration. Despite the exhaust tweaks, it still sounds a bit dieselly at points. I'm up-to-date with my Radio 4 Comedy, Desert Island Discs and World Cup Time Machine podcasts. This looks bleak.

Things are looking up: M25 becomes A41, and time for a McDonald's stop. I'm too late for breakfast but the way the CS carves through the entrance road means a missing McMuffin doesn't really matter. The front end (that was always a strong point of this generation) is more tenacious than ever, the grip greater and the rear more faithful than it's ever been. Good.

Now obviously the A413 between Aylesbury and Buckingham at lunchtime is not going to be deserted. That said, there's still a lot to learn about the CS here. The first is the composure here that eluded the early F80s in Britain. That's not just in suspension compliance and control (which is markedly improved), but also traction, be that in a lower gear or changing up with the more aggressive shifts. (The DCT is still near-flawless, since you're asking). The raggedness that could characterise an M3 in those situations has gone, but with the fierce edge certainly intact. I can't speak for a Giulia, but the C63 never feels this focused.

Time for a quick photo stop at Silverstone, because I'll bet many of us fell in love with M3s (or just the 3 Series) watching them in the BTCC. That's not going to happen with an M4, is it? There's another reason, too: Lotus Silverstone is here, and £86,425 buys an awful lot of Hethel sports car. Now I know it's not the most logical comparison, but then spending another £25k over a Comp Pack M3 for a car with an extra 10hp isn't exactly rational car purchasing either - thinking outside of the box is entirely valid. However good this CS looks (and I think it looks fantastic), it can't match the Signature Silver Evora 400 Silverstone has available for presence. It also has six cylinders, four seats (sort of) and costs £82,000 brand new. Interesting...

Now it all makes sense. On the other side of Silverstone the A413 is quieter and, quite frankly, I don't want to be driving anything else: not that Lotus, not another M3, not a 911. Finally there's an F80 you can have real confidence in, pushing the car and enjoying it rather than fearing reprisal. There's huge grip and poise, but always an indelible sense of rear-driveness - the relationship between throttle, Active M Diff and rear wheels feels spot on, with enough coming through that natty new seat for the driver to know what's going on. While not fundamentally different to an M3, the way the CS communicates its intentions (and keeps a lid on its wilder side) makes it tangibly more enjoyable to drive. You'll want Sport for the dampers (to eliminate the float that can come with Comfort), Sport Plus for the powertrain (to get the straight-six at its scalpel sharp best), steering in Comfort (though Sport and Sport Plus don't feel as bad as they used to) and M Dynamic Mode for the traction control. The latter in particular is expertly configured. You'll have a riot.

Well on the way to Sytner Nottingham now, and the M3 CS and I are firm friends. Here's an M3 with the intensity, the potency and the ferociousness of any other, yet now properly harnessed and with the driver able to exploit it more freely. My lunch notes say "can kill you like any other M3; now doesn't feel like it actively wants to". Nottingham is less than an hour away. Road noise still annoying. Handily the Harmon Kardon stereo is great.

Alright, so perhaps comparing an £80k 3 Series with an £80k Lotus is unfair. So how about this instead? Lurking in the corner at Sytner is an Alpina B3 GT3, one of just five in the UK and a car described by Autocar a vehicle that "could be the best handling 3 Series of its generation." Despite actually having fewer miles on it than the press M3 CS, it's for sale at £65,000. I happen to think it looks marvellous too, just enough race car influence melding with Alpina subtlety to create something really handsome. Yes, it's new versus used, but again I think it's worth suggesting alternatives like this for the CS, as the price forces you to appraise it differently. Because it's hard to make much sense of an M3 at this money, isn't it? If there was time I might have swung by the Porsche dealership nearby, but there's a certain football game to watch...

What football? On a clear stretch of A606 the CS feels right at home; while the biggest surprise might have come from its newfound B-road assurance, a fast(ish) and flowing A-road seems like prime M3 territory. Some straight-six howl has been rediscovered, the (optional) ceramic brakes are superb and the size feels good, too: sure, it's as tall and as wide as an E39 M5 now, the M3, but it's still a good chunk shorter. As the next 3 Series inevitably grows, this might be looked on more fondly. After all, how many people have you heard talking about beyond improvement an E39 is?

Arse. Traffic. I'm not going to make kick off. Still, it's nice to see the CS receiving some positive attention, and it's of course as easy to drive as any other 3 Series on London's orbital motorway. An Evora would not be. Also, with the suspension in Comfort, the CS really squats down and rears its nose when accelerating - I like that.

Kieran Trippier has scored! And I'm still not home. Thank goodness for 5 Live.

Made it back. In the car for at least eight hours today and far comfier than expected. But that's not important now, because football's coming home...

Ah. Maybe it isn't. Still, that at least means we can focus on the M3. And despite all the positives, it's hard not to feel that BMW has shot themselves in the foot a bit with this one. See when the E46 M3 CS came out, it was known as the Competition Package in other markets, and that's what this car feels like. Probably as fabulous as that CS did in the mid-2000s, but - and this is the crucial difference - not as far removed from the base product as the price would imply. Really the current Competition Package should just be the base M3, with this car then representing the CS/Comp Pack/whatever-sub-GTS-name-BMW-wants just above it. At a car closer to £70k than beyond £80k this M3 would have ensured that the F80 generation departed with its head held high, boasting an immense driving experience that reasserts faith in BMW M. But in lining up against 911s and all manner of other rivals at nearly £90,000, the CS doesn't quite cut it, meaning it will remain a car for dedicated and deep-pocketed M enthusiasts only. Shame.