How to improve the very light and very fast Elise? Make it lighter and faster still!

Chatting with Lotus CEO Jean-Marc Gales about this

, and about Lotus more generally, is a fascinating experience. His unwavering focus on shedding weight everywhere is extraordinary; if weight can be saved without costing the earth (presumably in every sense), Gales wants to do it.

Throughout he repeats the key stats for this car, that it's 21kg lighter and 26hp more powerful than an Elise 220 Cup. He can tell you where every kilo came from and where some has been added back in (about a kilo for the leather over the sills, for example). Soon you're wondering what excess mass you can save as a driver to really get the most out of it. This fascination with weight saving will characterise Gales' future products and, if they continue in a similar vein to this Cup 250, they promise to be absolutely brilliant.

In fact, it's worth getting what's less incredible about this little Lotus out of the way first. As you may have noticed, this particular car has the Carbon Aero pack fitted, saving another 10kg to take the unladen weight to 921kg and lightening your wallet by a further £4,000 in the process. This car also didn't have a radio; fine for a brief blast, and probably in keeping with the Cup ethos, but you suspect a few customers will want it back in. And finally, the gearbox still isn't quite as sweet and as sharp as you'll find in Sevens, Atoms or some other hardcore Brit lightweights. 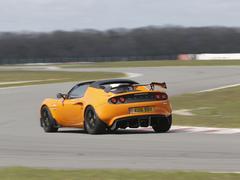 Elise, but more so

Other than that, the Cup 250 is a triumph. Yes, it may have more than twice the power of the very first Elises, but the joy of this car is that it retains everything that's made Elises so great over the past 20 years. With some very grown-up circuit ability. It's not lost sight of being an absorbing and exciting road car, but neither has this consideration compromised it for track.

Before even leaving the Hethel car park, the Elise is a reminder of just how good properly developed unassisted steering is. Note that's not simply unassisted steering, because Alfa Romeo has shown us that doesn't automatically tally with good. But even compared to very good power steering systems - McLaren springs to mind - the Elise is a world apart for telling you every last detail of what the front wheels are doing. It's not hyper alert like a Caterham, but the response perfectly suits the car.

On the road, you'll notice more weight to the steering than you might expect. This is due to a substantial tyre upgrade, the fronts now 195/50 Yokohama AO48s from 175/55 previously. It makes resistance to understeer on the road just tremendous, but don't assume because it's grippy it's dull. Through the steering and through the seat you're always being told so much about what the car has left to give. Yes, it's more than you can reasonably commit to on the road, but being so involved with the process is adequate compensation. 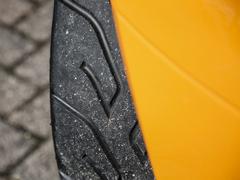 Initially the engine seems merely a tool to get you to the next corner, but then it becomes apparent those corners are coming at you quicker and quicker and quicker... The Cup 250 is a terrifically fast Elise, one that's entirely accommodating of really going for it and a more relaxed gait too. The 184lb ft torque peak is available from 3,500-5,500rpm and peak power is at 7,200; it may not scream past 8,000rpm like an Elise may have once done, but as the shift lights flash and the car keeps getting faster, it's more than exciting enough. The brakes are superb too, though a slightly firmer response at the top of the pedal would be nice.

However good the Elise Cup 250 is on the road though, on circuit is where it really needs to shine. If it doesn't, why not save £10K and buy an Elise S? Fortunately, even with just a few laps of the Hethel test track, the Cup 250 shows just why it's worth the premium. Sure, you would expect it to be good on the track used for its development, but there's enough here to suggest the Elise will be superb on any circuit.

As on the road, it's not the pace that stands out immediately, even if this car is now as fast as a standard Exige V6 S around a lap. It's the way the Elise makes the driver an integral part of what's going on, rather than them just being a guide. An obvious point when appraising a Lotus perhaps, but one that remains relevant as so many cars distance you from their workings. It flatters with its composure but it also challenges with its ability, which is just what you want from a track car. 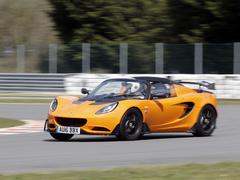 Those tyres provide outstanding grip, but of course there's the aero to rely on also. The 66kg at 100mph figure is handy, because that's about the speed for the Windsock right-hander at Hethel. For something so small, it feels fantastically stable and like it could carry even more speed lap after lap. It then charges on to nearly 130mph (in an Elise!) before stopping with absolute confidence for the tight chicane.

Some may object to traction control and ABS featuring in a Cup Elise, but so well-judged is their calibration that you won't even notice. The Sport setting is ideal for track days; turn everything off and the grip reserves are simply huge with the tyres warm. It will push to understeer eventually, the car easily brought back into line with a lift. Get it right and the Cup can be straightened under power, but this is a track car for nailing braking points and apexes rather than the Caterham school of slow in and sideways out.

It's a special car then, this Elise. With a radio and the roof optioned in, it could make perfectly habitable transport to and from a track day while also being one of the fastest cars at it. Sure, it's a lot of money for an Elise. No doubt some will call for a cheaper, even lighter Elise that celebrates the purity of the original instead. But this is the Elise we have, and it's absolutely stellar. Consider it not as 'just an Elise', but instead in the ranks of c. £50K track cars, and it's hard to imagine a more complete package.