A left-field alternative to the German super saloons, the IS F has always had appeal - especially so at £15k

Whenever the phrase 'fast Lexus' is used, most of us think of the LFA, but that hair-raising piece of kit wasn't the first overtly performance-orientated Lexus. That distinction went to the IS-F, launched at the Detroit show in early 2007 as a rival to the BMW M3, the E92 version of which debuted in that same year.

Despite that, and the fact that the 1,690kg Lexus was only 35kg heavier than the M3, the IS-F was slightly slower through the 0-62mph run, though still quick in its own right at around five seconds dead. Contemporary road testers also found the Lexus's handling easier to criticise than the BMW's. Whereas the M3 chassis could be adjusted to deliver anything from snap oversteer on the track to bump-smoothing comfort on the high street, the Lexus's less precise suspension control made it more of a compromise in most situations. The steering wasn't as sharp either. The final nail in the IS-F's coffin was its new price. Starting at £56,600, it was more than £5,000 dearer than the M3. 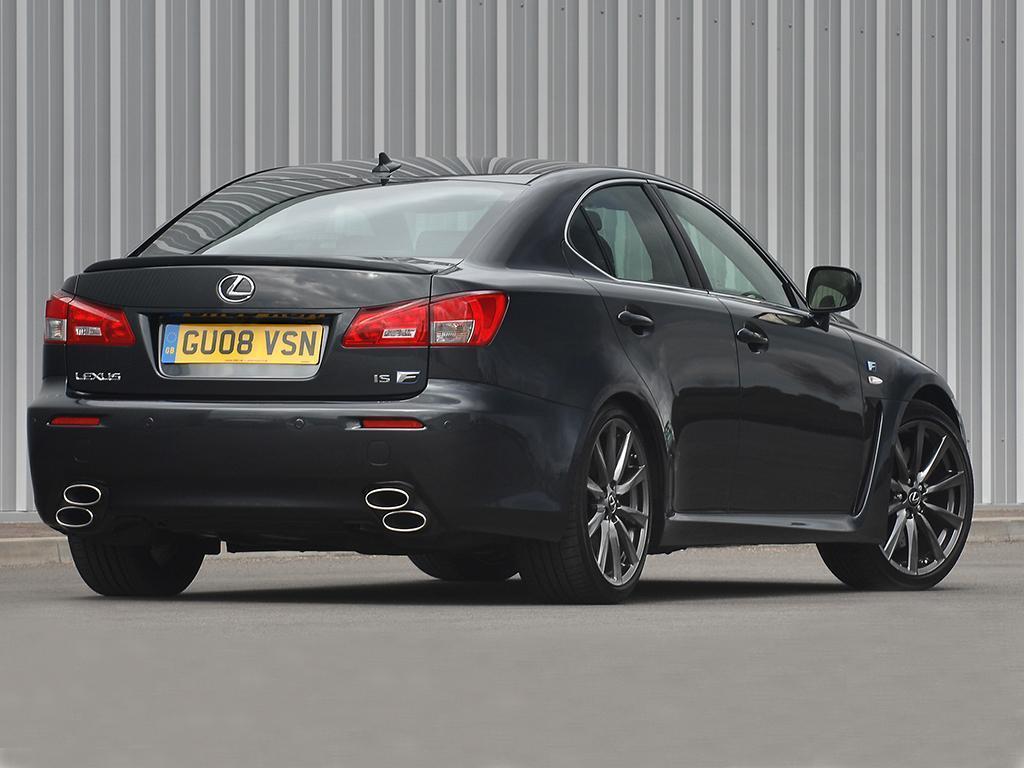 One decade later, however, the real-world-motoring gap between the two is nowhere near as clear cut. If you're not overly bothered by the IS-F's on-the-limit shortcomings relative to the superb M3, you might want to give some serious consideration to what is a fine sporting saloon from a manufacturer with an unbeaten reputation for quality and reliability.

Here are some of the ups and downs you should be looking for in a used IS-F. As always with these guides, what follows is not intended to frighten you off, but to help you keep your eyes - and mind - open. In fact you might be pleasantly reassured by the brevity of this piece.

Search for a Lexus IS F here

Bodywork & Interior
Rust is always a consideration on any not-new car but there's very little evidence of any of it troubling IS-Fs. The tracks and cabling for the sunroof can get into a bit of a tizzy and the rear view mirrors can develop a wobble, otherwise there's very little negative stuff to report from the outside.

Inside, there's not much leg- or headroom in the back, so if you have family members or actual friends to move around, size them up before buying. And if you have more than three of them, bear in mind that this is a four-seater. The boot release button should pop the lock okay, but the boot lid on older cars might not raise up without assistance.

If you live in a warmer climate, lucky you, but if you're planning on running an IS-F there try to keep it in some sort of shade when you're not using it as the dashtop and door top coverings do start to get tacky, or even melt. Post-2010 cars had the option of a full white leather interior. 2011-on cars got a new instrument layout with a digital speedo inset into the tachometer and upgraded headlights, which looked cool but they lost their steering-linked directional function. You win some, you lose some.

Exhaust tips don't normally come under the Bodywork section, but they do when you're talking about the IS-F because they're not actually connected to the exhaust. They're part of the bumper assembly and purely decorative. If you look through them you'll be able to see the ground.

While we're talking about the exhaust, the real one that is, this is quite restricted. Some say that you can liberate an extra 30-35hp just by changing the header pipes, or 15-20hp with a cat-back system. It will sound amazing, too.

Engine & Transmission
One big thing to check here: coolant level. If it's low, or if there are signs of dried coolant in the engine bay (if it's the correct coolant it should be bright pink and easy to spot), it could be that your water pump has sprung a leak. That would be lucky if it has, because the alternative is the so-called valley plate leak which was more prevalent on earlier cars - and that is a much more expensive fix than the water pump.

It's a leaking heat transfer plate, or heat exchanger. When these cars were under warranty Lexus dealers had to sort it out for free. Now they'll quote you hard for a 12-14 hour job that requires removal of the intake manifold and fuel rails. Needless to say won't be a small amount. Non-dealer specialists should be able to trim at least 4-5 hours off that. Be careful, though, as some well-meaning mechanics might tell you that they can sort it with sealant and without dismantling the manifold. That might work, but then again it might not if say an O-ring gets pinched or the sealant doesn't quite do what it says on the tin.

The V8 motor is docile, reasonably economical at a 24mpg average, and also very strong, with supercharged examples putting out 650hp, but owners in warmer locations and/or doing track days have noticed oil temperature warnings coming up surprisingly quickly on the gauge. You can get auxiliary oil coolers from the aftermarket but it still seems slightly odd that Lexus didn't address these concerns as part of one of the car's mid-term revamps.

There's nothing inherently wrong with the three-mode (Sports, Snow and Normal) automatic transmission in day to day use. The world's first production eight-speeder, it's actually pretty good at recognising driving styles and will hold lower gears if it realises you want to stretch the engine's legs, shifting harder and faster into the higher gears and delivering nice blips on the down changes. The absence of a manual gearbox was either a missed trick or entirely in keeping with Lexus's image, but there is an advanced Manual mode via a pair of paddles.

Suspension & Steering
These cars are quite sensitive to wheel alignment, so it's worth investing a few quid to get that right. The electric steering is not very feelsome, so don't worry if it doesn't seem as sharp as your mate's M3.

2010-on cars came with a Torsen limited slip differential. That's definitely worth having if you enjoy your driving, but obviously the prices for these cars will be slightly higher, what with that and them being more recent and everything. Those 2010 and on cars also had upgraded infotainment with a 40Gb hard drive and the ability to stream your choons wirelessly through your smartphone.

2011-on cars received a major suspension revision, with softer front springs, stiffer rears, thicker anti-roll bars at both ends, stiffer bushes on the back subframe and ARB, new steering and control arm components and tweaked rear camber. Although these suspension mods did reduce ride harshness, the corollary was a slight sensation of overdamping, giving a mix that not all IS-F owners felt was a step forward.

Trackdayers feel that the IS-F is under-tyred for this sort of use. If you're one of them, you may already know that 245s or 255s will fit on the front wheels without rubbing issues, and that 275s or even 285s will go on the back.

The drilled brake discs have been known to develop cracks radiating out from the holes under hard use. Brake dust accumulates at quite a rate on the alloys if you're using the recommended bitey pads. Brake switches go awol, and wheel bearings wear out.

Conclusion
The IS-F is an interesting alternative not only to the M3 but also to the C63 AMG and Audi RS4. It's affordable to buy and, fuel costs aside, cheap to run. Even high-milers will often still feel factory-tight. Lexus's fine build quality and reliability should mean that you'll be incurring few costs over and above those of normal consumables.

Best of all, IS-Fs have the built-in exclusivity of a small-run car. And it's a long way from being a typical Lexus. Pipe smokers should look elsewhere.

Search for a Lexus IS F on PistonHeads here